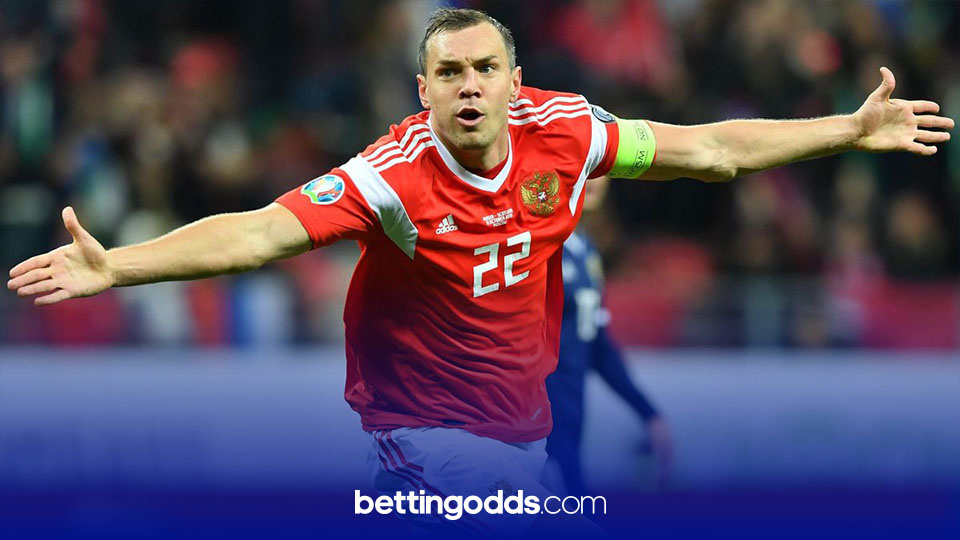 Russia have only made it past the group stage at the European Championships once - back in 2008, when they reached the semi-final of the tournament - and I don’t see them causing too much damage this summer. Placed in a strong group alongside Belgium and Denmark, I would be surprised if they qualified for the last-16 via the group.

They could, however, make it through as one of the four best-performing third-placed teams, although I wouldn’t fancy their chances of advancing any further against the likes of France, Belgium, the Netherlands or Spain - who would be their opponents if they were to qualify via this method.

Russia's key player is their talismanic striker and captain Artem Dzyuba. The 32-year-old target man has scored 29 goals in 50 outings for the national side and has notched 20 goals for club and country combined this time out. Dzyuba poses such a physical threat up front and is undeniably Russia's biggest goal threat. One to keep an eye on in the anytime scorer markets and a 66/1 outsider in the Golden Boot betting at the time of writing.

CSKA defender Mario Fernandes is the first name on the Russia teamsheet and will be ever-present for his country at the Euros. A forward-thinking right-back, who can also operate in midfield, loves to join the attack and supply crosses from the wide areas.

Monaco assist-merchant Alekandr Golovin has been really impressive for the French side this season, providing four goals and eight assists in Ligue 1. As a result, his projected value on Transfermarkt has risen to £20.7 million - making him the most expensive player in Russia's squad. The 24-year-old will be hoping to build on his 5 international goals this summer and is certainly a player that will pose a huge threat to opposing sides at Euro 2021.

19-year-old Maksim Mukhin may not even make the squad for this summer's tournament, but if he does, the Lokomotiv Moscow midfielder will definitely be one to watch. A mature player with what looks to be a huge future ahead of him, Mukhin has been playing regularly in the Russian top-flight this term, as Lokomotiv battle Zenit for the title. Valued at just under £2 million by Transfermarkt, the teen's price will only sky-rocket if he impresses in the shop window this summer.

Russia are 100/1 shots in the outright Euro betting odds market.

Russia are 5/1 to win Group B, making them third-favourites behind Belgium (8/11) and Denmark (10/3). They are third-favourites just to qualify for the knockout stages, priced at 4/9 in the betting.

Russia’s manager is Stanislav Cherchesov. The 57-year-old has managed the team since 2016, and previous to that has taken charge of Legia Warsaw and Dynamo Moscow - among several others - at club level.