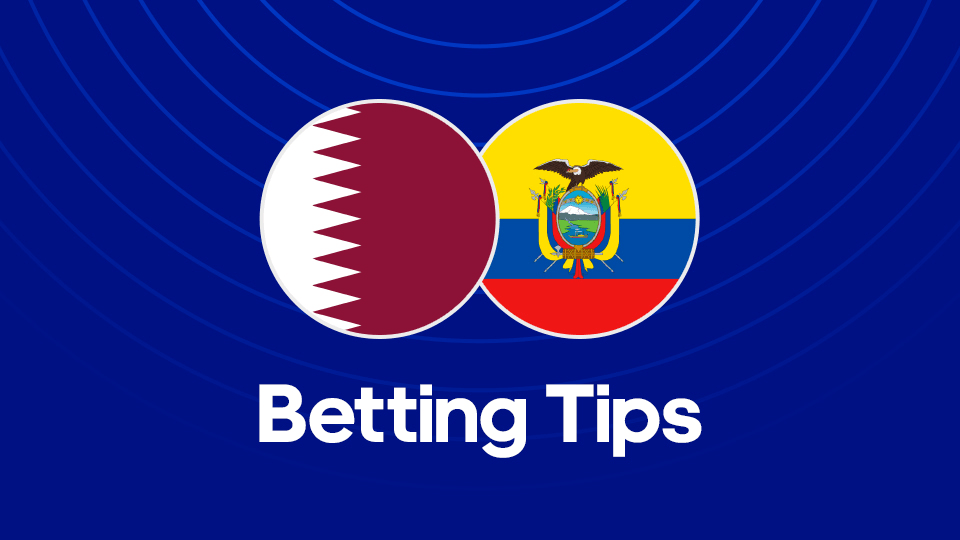 Here we go! The time is finally here as the 2022 World Cup explodes into action at 4pm on Sunday 20th November at the Al Bayt Stadium in Al Khor when hosts Qatar take on Ecuador in Group A, live on BBC. Tipster Wizard has previewed the match and provided his best bets for the action...

Qatar are the first ever Middle Eastern World Cup hosts and they will be eager to impress on their home soil in this opening fixture.

This will be their first ever appearance at the World Cup, thanks to the automatic qualification due to being the hosts for this tournament.

They will have the advantage of playing together for a long period of time coming into the World Cup and having won 5 friendlies in a row in recent weeks, their form has been impressive.

Another advantage to have will be the playing conditions as the hosts are used to playing in the Qatari weather so a lot of factors point towards Qatar being capable of pulling off a result in the opening fixture.

As for their opponents Ecuador, they surprised many by qualifying ahead of nations like Chile, Peru and Colombia.

They are a team that have been very hard to beat in the qualifiers and they even managed to hold Brazil and Argentina to 1-1 towards the end of the qualification campaign.

However, they are a team that lacks goals. They have only scored 1 goal in their last 5 friendlies leading up to the World Cup and have drawn 9 out of their last 12 games in all competitions.

Games involving Ecuador are usually low-scoring encounters so we can expect another toughly contested opener where the game could very well be decided by a sole goal from either side.

These sides have met just once in a friendly back in 2018 which ended in a high scoring 4-3 win for Qatar but opening games of the World Cup are always cagey and nervous affairs so expect that template to continue.

A massive World Cup opener awaits us and as usual, I have you covered with 2 of my best betting angles included in the preview below:

Qatar have a fully fit squad to choose from.

Ecuador also have a fully fit squad to choose from.

Qatar vs Ecuador Odds
Qatar or draw + Under 4 goals in the match
4/5
Odds correct as of 2022-11-18 08:30 Odds subject to change.
Bet £10 get £30 in Free Bets
#AD New customers on mobile only. 7 days to claim and stake £10 minimum bet at odds of 1.5 or greater to qualify. Free, void, cashed out or partially cashed out bets do not qualify. Max 3x £10 free bets credited on bet settlement. Free bets must be used on 4 or more selections with selection odds of 1.3 or greater. Free bets are non-withdrawable, and stake not returned with winnings. 7 day expiry. 18+BeGambleAware.org. T&Cs apply.
Bet £10 get £15
#AD New customers only. 18+ begambleaware.org 1st Deposit, Min Deposit: £10, max £15 bonus, valid for 14 days, bets must be placed at a min. odds of 1/1 (2.00) or greater and be settled within 14 days of placement.T&C's apply.
Double the odds, any sport, any bet, any odds!
#AD 18+ begambleaware.org Only valid for new registrations to Grosvenor Existing members do not qualify, Bet must be placed using real money in combination with the Odds Boost Token, Offer applies to Sport bets only. Max stake is £10. Each way bets are a maximum of £5 each way (£10 total). Customers have 60 days after registration to use the Odds Boost token. T&Cs apply.

To date, no hosts have lost the opening match of a World Cup.

Qatar have the advantage of having played more games recently than most other teams at this tournament.

Their squad has had a lot of time to build chemistry and they will be used to the weather conditions too.

Qatar will be motivated to put up a solid showing in this World Cup opener in front of their home fans and they have a realistic chance of getting a result against an Ecuador side that lacks goals.

Coming into this tournament, Ecuador have only managed to score 1 goal in their last 5 friendly fixtures. 4 of those games ended in 0-0 draws.

Ecuador have gained most of their points during the qualification campaign at home, winning just 2 of their 9 away games in the qualifiers.

I expect that trend to continue which is why I have taken Qatar’s double chance as the first selection of this 4/5 priced betbuilder with bet365.

As for the 2nd selection, Qatar have kept a clean sheet in 4 of their last 5 friendlies heading into the tournament while Ecuador have kept 6 clean sheets in a row in their friendlies leading up to the World Cup.

We have a contest between two stern defences and considering this is the opening fixture, we can expect a cagey affair with both sides unwilling to commit too many men forward which is why I have gone for the “Under 4 goals” selection. Expect a low-scoring encounter with Qatar to get something out of this game.

Combining these 2 selections gives us a solid betbuilder and I am happy to stake 1pt on that as our first bet of the World Cup.

Caicedo was Ecuador’s joint most booked player in the qualifiers and is also second for the most fouls per game in the premier league this season.

Almoez Ali is Qatar’s main man upfront and their biggest goalscoring threat. The only time he came up against Ecuador was in a friendly back in 2018 and he scored a goal back then too.

I expect him to be fired up for this fixture and get at least 1 shot on target.

Combining these 2 selections gives us a cracking 8/1 longshot with bet365 and I am happy to stake a small 0.25pt on that as our 2nd bet for this game.

Bet £10 get £30 in Free Bets
get offer get offer
#AD New customers on mobile only. 7 days to claim and stake £10 minimum bet at odds of 1.5 or greater to qualify. Free, void, cashed out or partially cashed out bets do not qualify. Max 3x £10 free bets credited on bet settlement. Free bets must be used on 4 or more selections with selection odds of 1.3 or greater. Free bets are non-withdrawable, and stake not returned with winnings. 7 day expiry. 18+BeGambleAware.org. T&Cs apply.