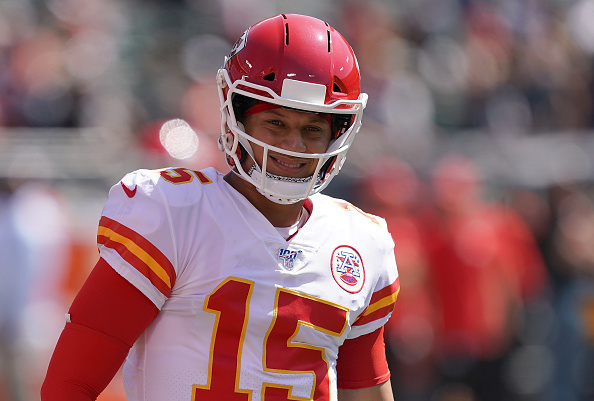 NFL Betting Tips: We back the Chiefs to keep regaining their mojo
By Adam Roberts
15:44 Thursday 9th December 2021 - 5 minute read

As part of our expanding sports coverage here at BettingOdds.com we've enlisted our US sports specialist @OddsTerrier to do a weekly NFL preview and accumulator. This will lead right up to the playoffs and eventually the 'Greatest show on Earth' Superbowl LVI, which will take place on February 13 in Inglewood, California at the SoFi Stadium, home of the LA Rams and Chargers. We'll have comprehensive NFL tips and prop bets throughout the playoff period.

"We're baaaaacccckkk!!" - Our first ever NFL weekly preview went down a storm last week so we're back for more of the same for all you Gridiron fans out there. Safe to say our acca last week didn't quite go to plan - The Bengals were awful in the 1st and 4th quarters and awesome in the middle of the game and we're glad that if our bet went down it meant that the Detroit Lions could finally get that long awaited first win of the season.

Elsewhere we saw big wins for the Bucs, the Chiefs, the Rams and the Cards who all look like serious SuperBowl contenders. As do the Pats, who played a bizarre game out at a windy Highmark Stadium, with Bill Belichick choosing to pass the ball only three times in the game. The fewest seen in the NFL since 1974!

We have been scouring the NFL form book and have another accumulator for you to get stuck into. It includes two moneyline selections and two points spreads and pays a little over 8/1. You can place the bet directly using the link below.

I told you in last week's article that the Chiefs have their mojo back and they didn't disappoint. Beating the Broncos by 22-9 and covering the 10 point spread. Andy Reed's men have tightened up from being the worst defence in the league to one of the best. They've allowed only 14 points per game in the last three games and that's helped them beat the spread on each occasion.

The Raiders have hit a serious slump after the Jon Gruden scandal and have lost four of their last five matches - on each occasion scoring 16 points or under. I can see the Chiefs covering the -8.5 point spread quite comfortably in this one.

It was no coincidence that coach John Harbaugh chose to gamble for the 2-pt conversion last week against the Steelers. They have deep, deep defensive issues and he simply didn't believe they could contend against a resurgent big Ben in overtime. They are particularly lacking in strength in the secondary and that adds to the woes of a team who are already 3rd worst in the NFL in total yards allowed.

To add to their issues are a fresh Browns outfit coming off a bye week. We saw this match up only a couple of weeks ago and it didn't make for a good match up but the Browns know this is pretty much last chance saloon and will be looking to gain revenge over the Ravens. Baker Mayfield and the offence should have enough here to overrun the depleted Baltimore defence.

The Lions screwed our bet up last week with their magnificent first win of the season vs the hapless Vikings and we're now hoping they can help us out in week 14. Whilst Detroit are currently sat on a 1-10-1 record, they have been a consistently good bet in the Points Spread market. They are 8-4 against the spread and have won in each of their last four road games.

The Broncos looked poor last week vs the Chiefs when only scoring 9 points. I think they might win this one  by a narrow amount that should see us win on the large 9.5 point spread.

This match-up was spoken of by many in pre season as a potential SuperBowl preview. The 7-5 Bills visit the 9-3 Bucs after a bruising loss to the Patriots last week. The Bills have stuttered in recent weeks losing three of their last five games and this is primarily down to the offence - they scored only 31 points combined in the 3 losses.

Tampa Bay have won three straight after their own little blip in form scoring over 30 points on each occasion and the loss of Tre’Davious White in the Bills secondary will only add to the Bills issues against such a talented receiving outfit.