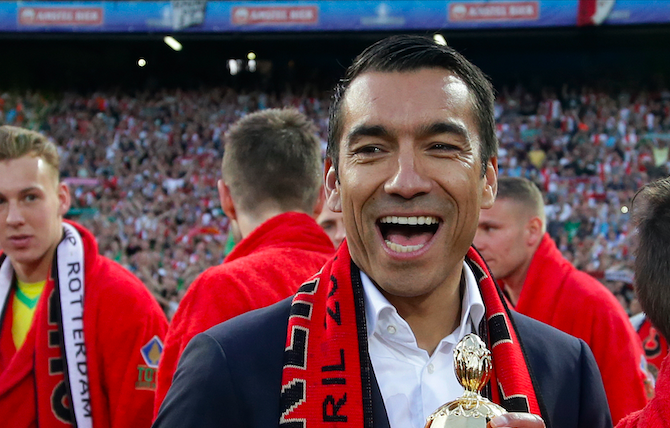 Giovanni van Bronckhorst has held talks with Rangers and is now as short as 1/9 (Paddy Power) to return to the club as manager.

The former Feyenoord boss, who won five trophies as a Rangers player, has been out-of-management since leaving Chinese Super League club Guangzhou R&F a year ago, however he now looks to be edging close to succeeding Steven Gerrard at Ibrox.

Gerrard officially left the Gers for Aston Villa on Thursday, and in his first official interview he’s today (Monday) revealed how the opportunity came about. "It was crazy and very quick,” he told Villa TV.

“I was aware of their interest on the Wednesday. I had a call from my representation and when it sunk in I wanted this to happen very quickly as the opportunity was too big. I must pay my respect to Rangers who were very professional."

The disappointment of losing Gerrard is now being replaced by fan optimism over the potential return of Van Bronckhorst. Although an appointment isn’t a given just yet with another former Gers player Rino Gattuso, along with ex-Chelsea boss Frank Lampard and Bodo/Glimt head coach Kjetil Knutsen all being linked to Ibrox - you can read more about the Norwegian right here.

As a manager, Van Bronckhorst masterminded Feyenoord’s first Eredivisie in 18 years (2017), sandwiched in between two KNVB Cups. He also lifted the Johan Cruyff Shield twice during four successful years at the helm, before heading off to China for a year at Guangzhou R&F. In his one and only season the club finished 11th during a worldwide pandemic.

He favours an attack-minded approach in a 4-3-3 formation, which is sure to be a hit in the blue half of Glasgow. He knows the club, understands the DNA, and brings with him success and an exciting style of play. Sky Sports report that the 46-year-old held positive talks with Rangers chiefs over the weekend, impressing with his “values and ideas” which aligned with the club's own.

It will now be interesting to see if an appointment is made ahead of Sunday’s League Cup semi-final against Hibernian.

Rangers are priced at 11/10 to win the competition, are the odds-on 3/4 favourites to retain the Scottish Premiership, the 6/4 frontrunners to lift the Scottish FA Cup, and 125/1 outsiders to win the Europa League.