Simon Grayson and Fleetwood Town never felt quite like the right combination.

True, Grayson did the job that was asked of him last season – and, arguably, a little bit more – overseeing a return of 25 points from 15 games which comfortably kept the Trawlermen in League One.

Not only, though, had the Yorkshireman taken a hit to his reputation due to poor stints at Sunderland, Bradford and Blackpool (second spell) his better achievements had been attained in completely different setups.

Although Grayson was once regarded as the third-tier promotion specialist, having tasted champagne with Blackpool (first spell), Leeds, Huddersfield and Preston North End, the bulk of the squad at each of those clubs comprised of peak-age players.

Fleetwood, by contrast, had to offload a whole host of peak-age players in the summer, in favour of what was largely a youth development project, with a handful of declining veterans thrown in.

Chairman Andy Pilley presumably compromised with Grayson slightly by sanctioning deals for Tom Clarke and Joe Garner, with whom he won promotion with North End in 2014-15, while Conor McLaughlin and Anthony Pilkington are also north of the 30 mark.

Grayson has never truly excelled with that kind of remit and while the uninspiring style of football his sides are often associated with could be tolerated if Town were solid and effective, they have in fact conceded 32 goals in 17 games.

It is never pleasant to see somebody lose their job, but equally it is hard to argue with the club’s decision to part company with the Yorkshireman and find somebody who suits the remit.

That somebody could be Stephen Crainey, if the former defender gets the desired results as interim head coach, with the 40-year-old currently bang in the mix at 2/1 (BetVictor) to take the job on a permanent basis.

Crainey has previously overseen the academy, after Simon Wiles – rated very highly by Pilley – had been promoted to the first team coaching staff last season.

Here are seven ways Crainey can get the Fleetwood job...

Fleetwood’s approach play so far this season has rarely changed.

The Fylde-coast outfit have tended to deep in their 5-3-2 shape, then looked for either a high ball down the middle, or a long pass down the side.

The problem Grayson has is that while Fleetwood have not been able to build play progressively, or with any real fluidity, nor do they have the option to go direct.

If we look at the graph below, the strikers collectively have won a combined average of 37% of their aerial duels.

Even that is distorted somewhat by the fact Joe Garner has their best record in terms of winning headers, having played just two games as a centre-forward, and even he would prefer the ball to feet.

Callum Morton has looked lively – thriving especially in the 4-2 victory at Rotherham – but there is an unhealthy reliance on the 21-year-old and even then, Fleetwood are not playing to his strengths.

As we saw at Northampton in the second half of the 2019-20 League Two season, the West Brom loanee can thrive in a direct system, but in that scenario, he much prefers playing off an archetypal target man like Vadaine Oliver, as opposed being an initial reference point.

In the absence of an Oliver-like figure, Crainey must get Fleetwood building play more progressively.

2. Turn Hill into a man mountain

Crainey already takes a lot of credit for the development of Town’s top teenage talent and the shining example is James Hill, who is unquestionably the best defender at the club.

Hill already boasts international recognition, having played three games for England Under-20s, and could go on to play at the very top.

Rangers, Burnley and Celtic are all understood to have had bids rejected for the youngster, while Manchester United and Barcelona are supposedly among the clubs who have been watching him.

Hill averages two interceptions per game, with only four players in League One making more and the 19-year-old is very reliable in the air despite his age, and being relatively short for a centre-back at 6’0”.

It is unclear when Hill will return from injury, or whether the club – in a place of having to scale back financially - can afford to keep the defender, but Crainey knows how to get the very best out of him and must do just that for however long he’s available.

John O'Shea has popped up as a contender to become the next Fleetwood Town manager, according to the latest in the betting market. The former Man Utd player can be backed at 10/1 (BetVictor) to replace Simon Grayson, who was sacked…

3. Get lucky with injuries

While the criticism of Grayson is valid, it has to be said that the former Aston Villa defender did not catch much of a break.

Hill, Morris, Morton and midfield metronome Jordan Rossiter, among others, have spent unwanted time on the sidelines, which has affected what is already arguably the worst squad Fleetwood have had at this level.

Crainey needs to strike lucky on that score.

4. Get the players smiling

Having won just three league games all season, it may be difficult for Fleetwood players to enjoy their football.

And yet, on Crainey’s first day of training, it is clear to see the players having a laugh and a joke, which is important.

Sometimes when results are going awry, the natural character of players doesn’t shine through because they may be afraid of overstepping the mark, getting told off or getting accused of not taking the situation seriously.

Disappointing results, though, do not change the fact that these players are human and, within reason, they need to feel able to express themselves.

Crainey can bring a different energy which may lift them. 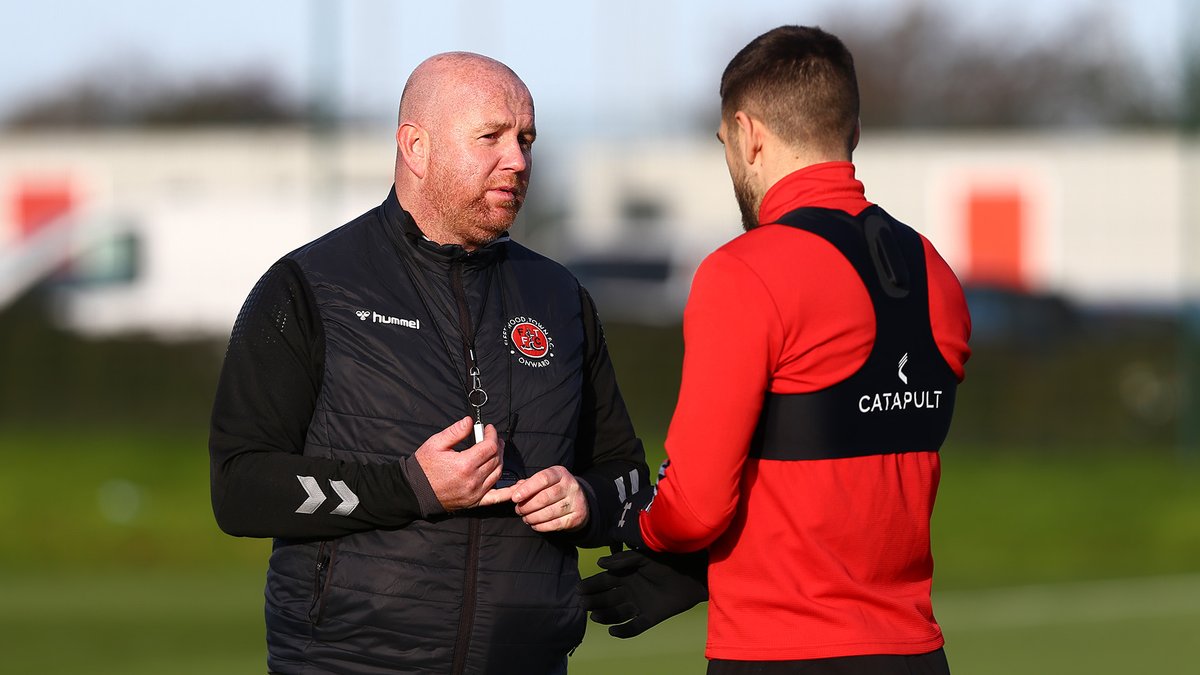 5. Get the best out of the midfield

Rossiter has not always been fit this season, but when he is he can dictate the tempo of a game very well.

Matete proved in his loan spell at Grimsby last season that he can bring a frenetic energy, strong challenges and excellent ball-carrying ability which may translate higher up in the right system.

Callum Camps, meanwhile, is one of the few big-money players left at Fleetwood and the former Rochdale man can relish an advanced, creative role that also allows him to chip in with goals too, having been top scorer with 11 in all competitions last season.

At their best, this trio is capable of running a game: one of Crainey’s tasks is to prove that.

As a result of working with Crainey and Wiles, Hill, Morris and Matete are already established first team squad members who could become serious financial and playing assets – if they are not already.

Ideally, Crainey would like to add to that crop.

Tommy Clarke’s experience has not borne much fruit in the eyes of the Cod Army, so there may be a temptation to move on the former North End stalwart to create space for a talent like Connor Teale, who has impressed for the Under-23s this term and has more than held his own with the first team in pre-season.

Elsewhere, Fleetwood have talents like poacher Max McMillan and ball-playing defender Chiekh Thiam, plus the Northern Ireland Under-21s crop of forwards Paddy Lane and Chris Conn-Clarke as well as midfielder Barry Baggley, the latter having just been recalled from his promising loan spell in the National League with Altrincham.

Billy Crellin, meanwhile, may have his chance if long-serving goalkeeper Alex Cairns is among those sold in January.

If Crainey can get two or three of these players featuring regularly in his stint as caretaker, Pilley will be that bit more tempted to the Scot with a long-term contract.

Next Fleetwood Manager Odds: Early names in the frame to replace Simon Grayson

Simon Grayson’s tenure at Fleetwood Town has come to an end after 10 months following a run of seven defeats in eight games, with his last stand coming in Tuesday night’s 3-1 loss to Oxford. Assistant head coach David…

Well, this is an obvious one: perhaps our readers could have skipped the whole article and gone to this bit?

For all the talk of Fleetwood needing to reset as a club and start to operate more sustainably, these increasing needs do not change the fact that football is a results-driven business, nor the fact that the club intends to stay in League One.

The good news for Crainey, though, is that the immediate fixtures favour him; none of the next seven fixtures come against top 10 opposition.

On top of that, the teams immediately outside the drop zone have displayed some vulnerabilities.

Morecambe have defensive issues, Accrington Stanley look disjointed, Gillingham are struck by injuries and could be about to lose their managers, AFC Wimbledon have a make-shift defence and while Cambridge are faring surprisingly well, they are in a tricky run of fixtures.

If Fleetwood can get some results under Crainey early doors, he may get the job until the end of the season: and might be able to earn himself the chance to head up a longer-term project after that.