Three betting outsiders who should be on Everton's next manager wishlist

It’s a severe case of deja vu for Everton fans as their club begins the search for yet another manager.

‘Hot seat’ is the perfect term for the Everton dugout, which has briefly played home to six permanent managers and two caretakers since Farhad Moshiri’s arrival in 2016.

The first manager Moshiri sacked was Roberto Martinez, who just so happens to be the manager Everton reportedly want to replace Benitez. An appointment would undoubtedly split the supporters, although a move may be shut down pretty quickly given that the Spaniard is in charge of some of the world's best players at Belgium; the country's FA will not want him leaving ahead of this year’s World Cup.

Wayne Rooney, who is doing an exceptional job at Derby, is also believed to be in the frame. Graham Potter has been touted but is unlikely to leave Brighton at this time. As is custom when a job opening crops up, Frank Lampard is linked, while the likes of Nuno Santo, Paolo Fonseca, and Lucien Farve are all available for hire.

Should a move for any of the aforementioned managers fall through, Everton should seriously consider these three options. Well, they should consider them right now to be honest...

If Everton are after a tactically astute, serial-winner, at the top of their game right now then look no further than Emma Hayes.

A new, fresh approach is needed at a club that’s not only stagnated but declined in recent years. Their last two league finishes were 10th and 12th, they are currently down in 16th with one league win since September, and never look like seriously challenging for a domestic cup - their last triumph was in 1995.

But whether Hayes, who continues to win trophy after trophy at Chelsea Women, would consider a move is open to debate. Back in February the 45-year-old was understandably irked when asked if she’d want to switch her current position for life in a League One relegation battle with AFC Wimbledon.

She stayed at Chelsea where she’s added a domestic quadruple to her sizable trophy haul, and also took her side through to the Champions League final. She’s managing some of the best players in the world, employs an attractive brand of football, and is currently bidding for more honours this season including a fifth WSL title.

Since taking charge of Chelsea Women in 2012 she’s built a dynasty and delivered 11 trophies, while Everton have won diddly squat and blitzed their way through seven permanent managers.

The Everton job is obviously far more eye-catching than the aforementioned vacancy at AFC Wimbledon, after all this is a job that's been overseen by back-to-back Champions League winners. Should the Toffees let their interest be known it will surely at least grab the attention of Hayes, who has the character, experience, and tactical expertise to make the historic move into the men’s game.

Chelsea Women's head coach Emma Hayes has responded to the links of her to the AFC Wimbledon job, and how the sport has reacted as a whole... 🗣️

Rudi Garcia may be a 50/1 long shot (888 Sport), but odds can change quickly in manager markets, and if rumours heat up we could soon see the Frenchman nestled amongst the early frontrunners for the Everton job.

In truth, it’s a surprise that Garcia hasn’t returned to management since leaving Lyon in May. The job he did there was brilliant. 14th upon his appointment in October 2019 he proceeded to lead the club to a Champions League semi-final, Coupe de la Ligue final, and the last-four of the Coupe de France; they were also hovering in the mix in last season’s Ligue 1 title race.

It was in the Champions League that he masterminded a brilliant quarter-final victory over Pep Guardiola and his wealth of talent at Man City. "You have to expect everything and anything with Guardiola, but we won the tactical battle," he said at the time. "We utilised our system well. We returned to a hybrid formation to frustrate De Bruyne."

Garcia previously won the French league and cup double with Lille where he managed a young Eden Hazard, during Juventus’ dominance he took Roma to two runners-up spots in Serie A, and Marseille to a Europa League final.

He’s yet to tackle the Premier League, but given his availability and experience he should definitely be on Everton’s radar.

One of the stand-out managers of the last year, there should be a new-Apple-mobile-esque queue for the signature of Kasper Hjulmand, who rarely features in next manager markets.

Since taking charge of Denmark in 2020, the adroit and emotionally intelligent leader has taken his country on a memorable journey to the Euro 2020 semi-finals, followed by a near perfect passage through to the 2022 World Cup during which they accumulated nine wins from 10 matches - the only defeat came after they’d qualified.

As a collective Denmark are a prime example of how well a country can perform as a team. The Danes are fantastic to watch, they have unity, spirit, and hunger in abundance, and will be determined to make a real statement in Qatar later this year.

The fact that the World Cup is later on in 2022 means a move away from his Denmark post is pretty unlikely. Yet, should the right offer come along - especially from a Premier League club - it’s surely something Hjulmand would at least have to contemplate.

He recently ranked 11th in FourFourTwo’s list of the 50 best managers in world football, and would no doubt be an excellent addition to England’s top-flight. 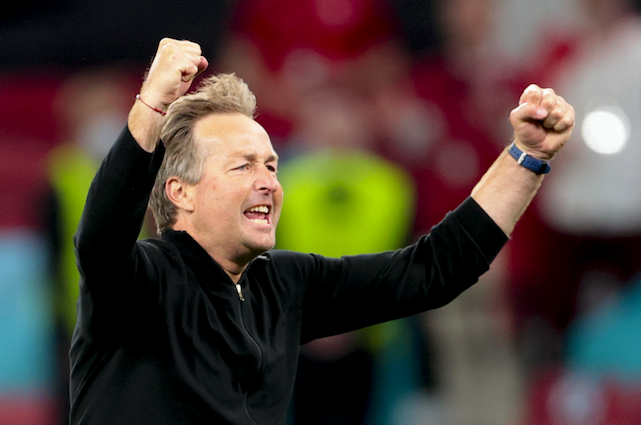