Jack Grealish gave his chances of making England’s squad for Euro 2021 a huge boost last night, putting in a Man of the Match display in what was an otherwise disappointing performance for the Three Lions in Leuven.

Gareth Southgate’s side can no longer win the UEFA Nations League next year after losing 2-0 to Belgium thanks to two first half goals from Youri Tielemans and Dries Mertens; it is no more than they deserve after an incredibly sterile showing at the Den Dreef Stadium.

Indeed, one silver lining was the performance of Aston Villa’s Jack Grealish who, especially in the second half, was head and shoulders above his colleagues, eagerly attacking the Belgium defence and slaloming through the onslaught of red shirts who attempted - mostly to no avail - to thwart him.

Grealish - now odds-on to make the Three Lions’ squad in the Euro 2021 betting at 4/11, and 4/5 to start against Croatia next June - is rapidly emerging as England’s most talented midfield maestro, and is a player who continues to provide onlookers with great excitement every time he steps foot on the pitch. Last night he lined up on the left-hand side of a flat front-three alongside Harry Kane and Mason Mount, as England adapted to a lack of pure pace and directness with both Marcus Rashford and Raheem Sterling sidelined by injury.

While the rest of England’s starting XI struggled to cope with an intense Belgium press and the individual capabilities of Kevin De Bruyne in midfield, Grealish took the game to the opposition, constantly looking to drive at the Red Devils’ bamboozled midfield and defensive line. It was clear that this was a man with a point to prove to his manager, and after last night’s performance it is safe to say that he has now done just that.

One glance at the 25-year-old’s stats from the game tells you all you need to know. Grealish took 76 touches, obtained a pass-success rate of 89%, completed four dribbles (more than anyone on the pitch), registered three shots and created two goalscoring chances in the final third, none of which were capitalised on.

Being fouled is an obvious sign of an opponent not being able to handle a certain player, so it comes as no surprise to see Grealish at the top of the list. On another day, he would have scored or assisted (or done both) and helped England to victory, but last night was just one of those nights for the national side - a night that us, as fans, have become depressingly accustomed to over the years. 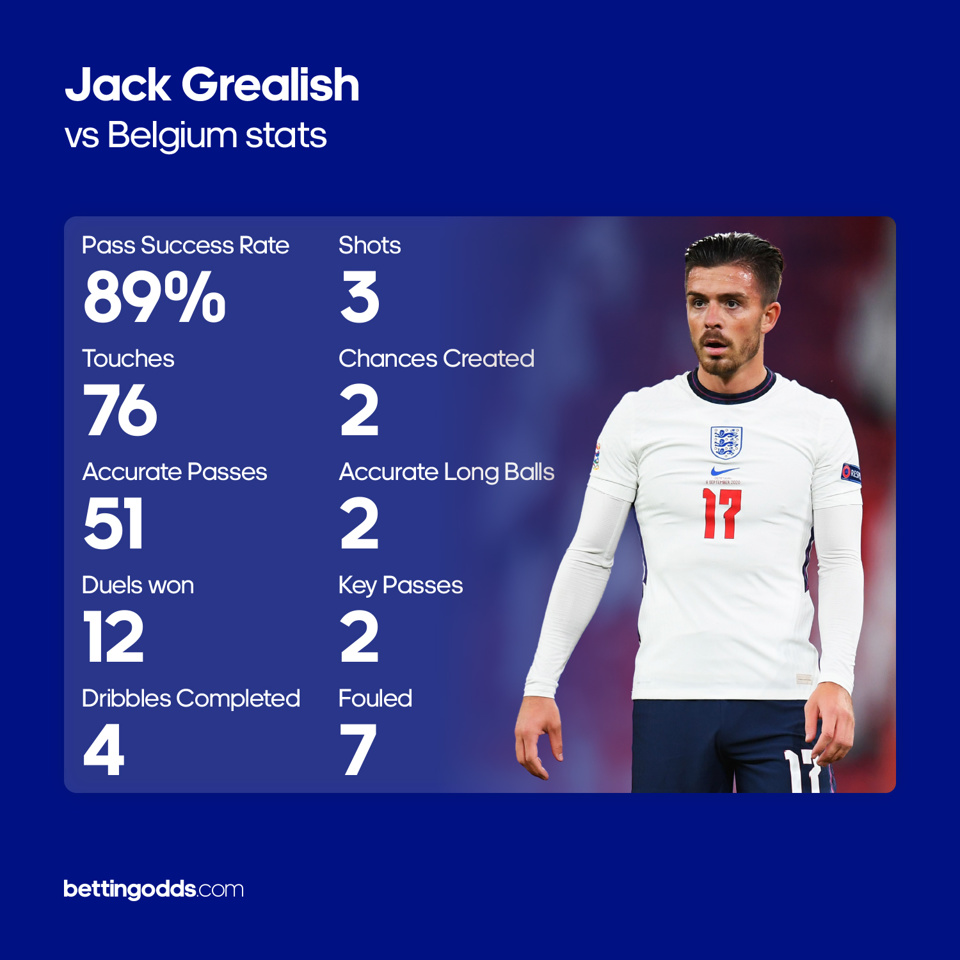 We of course should not be too surprised to see Grealish’s rapid transition from a player uncapped by England at senior level until he was 24 years of age, to a player who simply must be the first name on Gareth Southgate’s teamsheet at future major tournaments. Last season his eight goals and six assists were one of the main reasons why Aston Villa escaped immediate relegation from the Premier League having been promoted from the Championship the season before.

This time out, the Birmingham native has already chipped in with four goals and six assists as the Villans have fired out of the blocks in the top-flight, currently sitting pretty in the Europa League spots after seven games. Grealish is largely to thank for this, and it is clear that the confidence he has obtained from his performances at club level have been carried through to his form for England, much to the entire nation’s pleasure.

Last night Gareth Southgate lauded Grealish’s performance as “outstanding” and admitted that he has now moved himself up the pecking order for a start in future matches. While it is unlikely that the 25-year-old will operate in a front-three when the likes of Raheem Sterling and Marcus Rashford return, there is currently no player better qualified than Grealish to play in the creative No. 10 role just behind the aforementioned names in midfield.

Mason Mount (one goal, two assists in 20/21), James Maddison (one goal, one assist) and Phil Foden (two goals, no assists) are all fine footballers but none are enjoying the same level of form as Grealish at the minute and therefore deserve to start ahead of him.

For so long England have lacked a player with European flair; a player who can pick the ball up in tight spaces, complete a clever turn and then burst away from their marker with such explosive intent. Not since a prime Paul Gascoigne in the 1990s have we all been treated to a player of such raw footballing intelligence, until now.

Foden has shown glimpses of these exemplary talents and there is no doubt that in years to come he will come to the fore for England and carry the torch, but first it is Grealish’s time to be our modern-day Gazza; the player to get us off the edge of our seats and genuinely excited whenever the ball lands at his feet. The foundations are there, he must now continue to build on his progression to realise his full potential at the highest level.

England’s international year may have ended on a low note, with a lifeless performance which rules out the possibility of bettering last year’s attempt of winning the UEFA Nations League. But where the national team is concerned there is always more than a glimmer of hope in the tank, usually powered by sheer loyalty and patriotism. This time, though, it is powered by the man dubbed ‘Super Jack’ by his disciples at club level - if that reference was at all lost on you before last night, then I’m guessing it might just make sense now.

Croatia vs. Brazil Betting Tips: Back Tite's side to rack up the shots in quarter-final clash