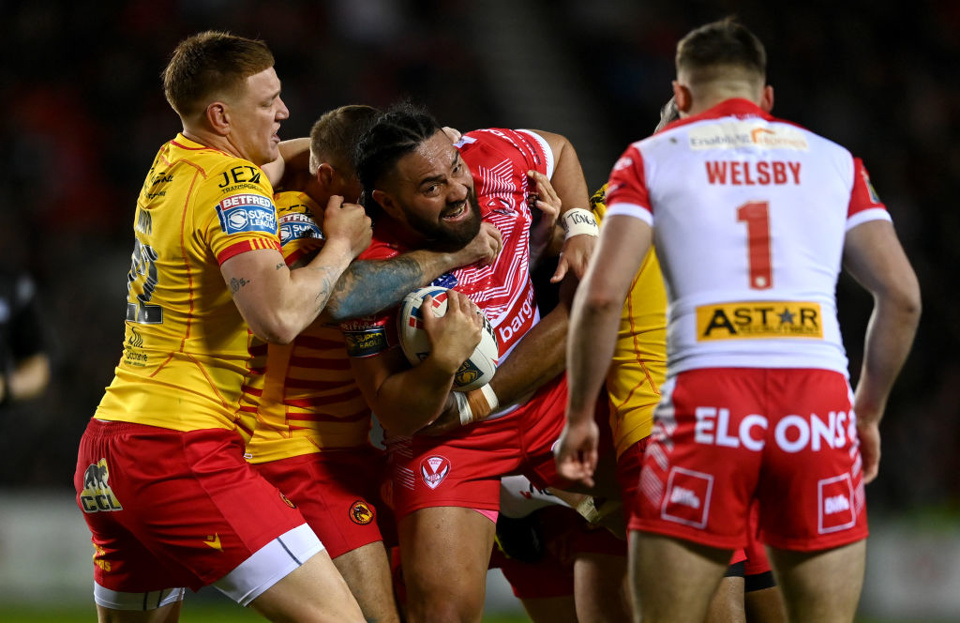 Last Saturday was a historic day for Super League as the first ever regular season game was broadcast live on terrestrial television with Channel 4 showing Warrington's last gasp win at Leeds. The Channel 4 cameras will be at another game this Saturday afternoon in West Hull as champions St Helens look to continue their blistering start to the campaign against the Black and Whites...

Round One is in the history books in the Betfred Super League and already some conclusions are being drawn by supporters. An example that seems to be held widely is that the team who have claimed the title in the past three seasons are once again going to be the team to beat after their impressive Round One dismissal of last campaign's league leaders and beaten grand finalists Catalans Dragons. St Helens showed no signs of complacency or rust in their 28-8 success and despite conceding first never looked in danger, particularly after Dylan Napa of the Dragons saw red for a ludicrously illegal shoulder charge.

The team with the task of halting the Saints juggernaut this week is Hull FC, a side who started last season well before falling off a cliff and know this season they must improve or else heads in both the squad and coaching department will roll. They began their 2022 campaign with a gritty 16-12 success away at Wakefield, playing the final fifteen minutes with 12 men after star full back Jake Connor saw red. His transgression sees him also banned for this contest and the Airlie Birds will undoubtedly miss their mercurial talisman.

The first tip will be a familiar one for readers of last week's column, with the Saints sided with again on the handicap. In rugby league the battle of the forwards is always absolutely crucial and Hull's pack, apart from the exceptional imports Sao and Satae, does not look like it will be able to handle all the threats that St Helens can throw at their rivals. Alex Walmsley was his usual destructive self last week and will relish the challenge of dominating another pack of forwards on enemy territory, while Joe Batchelor has quietly been improving for the Red Vee and earned the Sky Sports man of the match award in the defeat of the Dragons. With Morgan Knowles the form loose forward in the game and James Roby running riot out of dummy half it is easy to envisage the Saints marching up the field time and time again and winning the territory battle on the East coast. Their speed of play-the-ball in attack coupled with their incredible defensive line speed means overrunning their opponents becomes inevitable and I can only see this happening once more.

The killer factor for this bet though is the massive gulf in quality in the sides' backlines. Jamie Shaul will be stepping in for Jake Connor at full back for Hull and this seriously nullifies the Black and Whites' ability to score points, whereas Saints have ultra exciting Jack Welsby in the number one jersey who will be itching to get his hands on the ball and create scoring opportunities both for himself and his team mates. Will Hopoate and Konrad Hurrell formed a formidable right edge partnership last week for Saints and if the sides remain unchanged they could be squaring up against ex-Saints winger Adam Swift and youngster Connor Wynne. This is a mismatch in every sense of the word and Saints' right edge could run wild, but more on that later. Finally, in terms of the half backs Luke Gale had a solid try scoring debut last week against Wakefield for Hull, but this is a much sterner test and as mentioned earlier if the Saints line speed is as phenomenal as last week Gale and partner Reynolds could be in for a long afternoon. Facing off with them will be the ever assured Jonny Lomax and exciting youngster Lewis Dodd, who have already built up a tremendous synergy in the white and red. Across the park the Saints have more quality, size and speed and they can cover the handicap once more.

get offer get offer
#AD New UK customers only. Register using the promo code BETFRED60, deposit and place first bet of £10+ on Sports (cumulative Evens+) within 7 days of registration. First bet must be on Sports. £20 in Free Bets to be used on Sports, £10 in Free Bets to be used on Lotto and 50 Free Spins (20p per spin) credited within 48 hours of bet settlement. Further £20 in Free Bets credited 5 days after settlement. Bonuses have a 7-day expiry. Payment restrictions apply. SMS verification and/or Proof of I.D and address may be required. Full T&Cs apply.
Konrad Hurrell Anytime Try Scorer
8/5
Odds correct as of 2022-02-18 15:15 Odds subject to change.

As mentioned when making the case for the first tip, Konrad Hurrell could be in for a fun Saturday on Humberside. After his close season move from Leeds Rhinos, many eyebrows were raised as the 'Hurrellcane' had fizzled out after a big start at the Rhinos and was struggling to justify his marquee salary amid fitness concerns in Yorkshire. The Saints faithful were sceptical of his desire but after one game his signing already looks a masterstroke from his coach Kristian Woolf, who knows Hurrell well from his other job as head coach of Tonga. The big Tongan centre has emerged from a St Helens pre season looking slimmer and fitter than he ever did in the NRL or at Leeds and if he can be harnessed correctly by Woolf could be a sensational wildcard for the champions.

If as expected Saints go with an unchanged 17 then Hurrell will be facing the makeshift centre Connor Wynne. The 21 year old is undoubtedly a fine prospect for Hull and has put in some assured performances in his fledgling Super League career, however I am unconvinced centre is his position due to his defensive fragilities. If Hurrell can isolate the youngster I would back the Tongan to be able to steamroll his opposite number on the hunt for points, and there is always the possibility that the quality inside Hurrell such as Welsby, Dodd, Lomax or Roby could forge a gap for him to saunter through. Finally, the big man is always on the hunt for interceptions as exemplified last week and that is a serious possibility if as anticipated Hull are chasing the game from early in the second half. At 8/5 Hurrell is definitely worth backing to make it two tries in two games for the Saints.

Another debut try and this time it's Hurrell ✅ https://t.co/t8ZYM6Gag5

get offer get offer
#AD New customers only. Place your FIRST bet on any Football market and if it loses we will refund your stake in CASH. Max refund for this offer is £20. Only deposits made using cards will qualify for this promotion. T&Cs apply.
Rugby League Homepage

St Helens vs Catalans Dragons: Back the Saints to March in again

St Helens vs Catalans Dragons Predictions as BettingOdds.com provide a Rugby League Preview along with Betting…