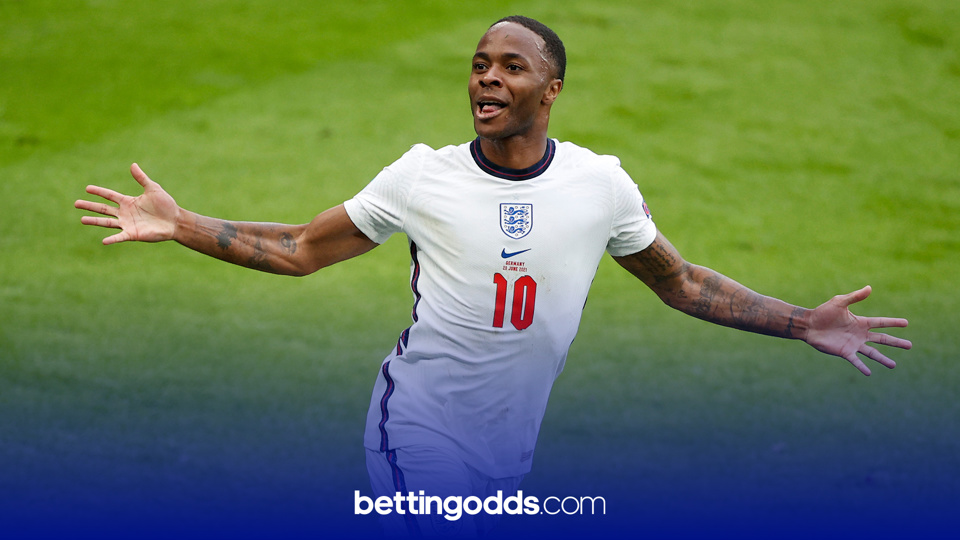 England were 11/2 for Euro glory pre-tournament and we've taken a look at how their odds have changed since
By Anthony Eadson
13:01 Thursday 8th July 2021 - 4 minute read

There’s sure to be some sore heads across the country this morning after England booked their place in a major final for the first time in 55 years. A nail biting game with Denmark finished 1-1 after 90 minutes, before Harry Kane hit home the winner after his penalty was saved by Kasper Schmeichel in extra-time.

England are now odds-on to win the tournament priced at 4/5 with most bookmakers to actually bring football home. That’s an implied probability of 55% for Southgate’s side to beat Italy in Sunday’s final at Wembley in a match that will go down in history.  We’ve taken a look at just how England’s odds have changed throughout the tournament. 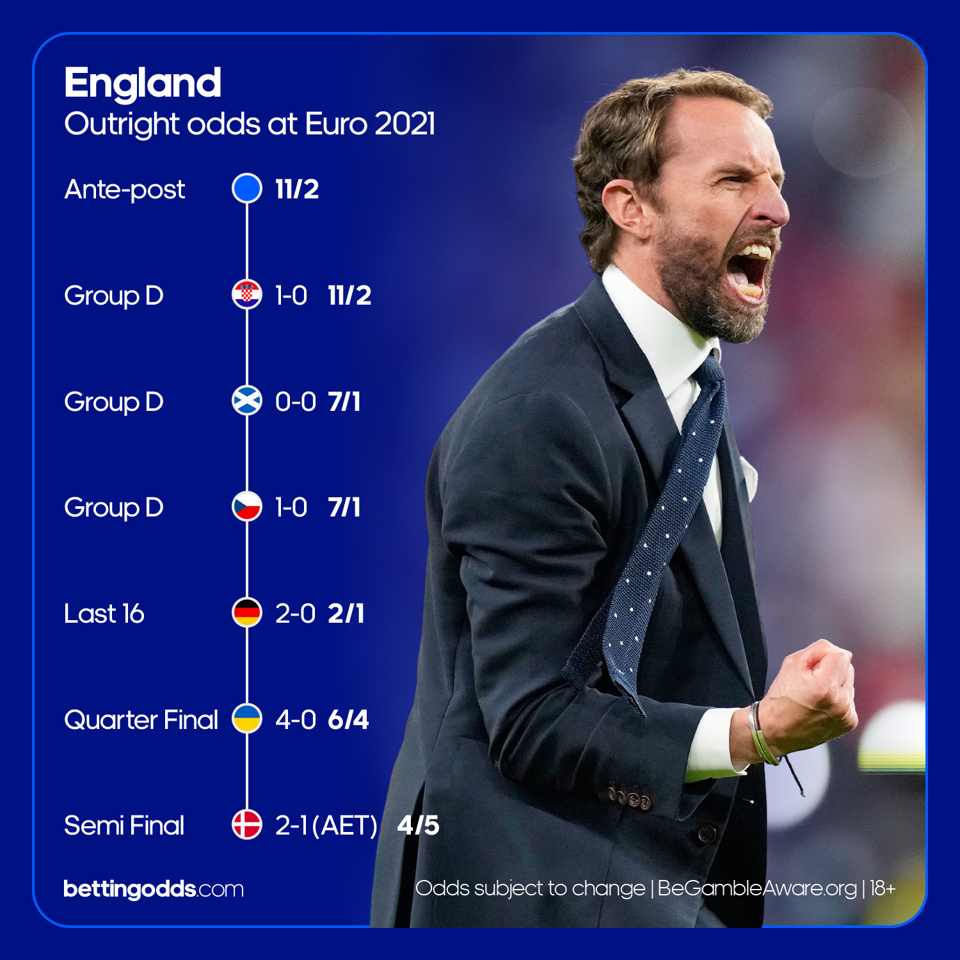 As usual, patriotic punters had backed England into a shorter price than they potentially should have been before a major tournament. However, the fact that England would play so many games on home soil was a huge factor and with such a talented squad and the experience of a World Cup semi-final in 2018 the bookmakers had them joint-favourites along with France.

England’s opening game of the Euros saw them face the side who had dumped them out of the World Cup three years earlier, Croatia. Raheem Sterling scored the only goal of the game in the 58th minute after some good work and a measured pass from Leeds United’s Kalvin Phillips. It wasn’t a groundbreaking performance and bookmakers with little movement on England’s price on the market with them remaining an 11/2 shot.

Memories of Euro 1996 were in the minds of some England fans heading into their second game in Group D against Scotland. Despite once again keeping a clean sheet, England failed to get on the scoresheet in what was an underwhelming game where credit needed to be given to the Scots. As a result, England were eased in the betting out to 7/1 in the betting with France still remaining favourites at around 4/1.

Just like Italy, England went on to keep a clean sheet in all three of their group games and a 1-0 win against The Czech Republic meant that they finished top of the table. In a game where England took just five shots on goal, it was once again Raheem Sterling who managed to score the only goal of the game at Wembley, but with a last 16 tie with Germany on the cards, 7/1 was still the price for England to win the tournament.

England against Germany is one of the most famous fixtures in football history and the two once again met in a European Championship at Wembley just as they had in 1996. This time The Three Lions put Joachim Low’s side to the sword in one of their most dynamic and complete  performances over the last few years. Goals from Raheem Sterling and Harry Kane would see England shorten into 2/1 favourites after the game, with France, Portugal and Germany all exiting at this stage. This was now the shortest price that England had been to win a major tournament in the last 25 years.

The route to the final was looking like the most generous that England had ever been handed and they wasted no time in dispatching of Ukraine. Harry Kane was on the scoresheet after just three minutes and went on to score a brace. Harry Maguire nodded in from a free-kick as well as Jordan Henderson getting his first goal for his country in a game that England fans could believe how easy the win came. By this time, any value in backing them had gone, with their price slashed into 6/4 ahead of the semi-final.

Gareth Southgate’s side had never been behind or even conceded a goal at the Euros until an excellent free-kick from Denmark’s Mikkel Damsgaard flew past Jordan Pickford in the first half of their Semi-Final to give Kasper Hjulmand’s side the lead. An own goal from Simon Kjaer levelled the game up and after 90 minutes the teams couldn’t be separated and the game went to extra time. Raheem Sterling won the Three Lions a penalty before Harry Kane stepped up and saw his effort saved, only for the England captain to stroke home the rebound and send the country into raptures.

England are now just 4/5 to win the Euros. Gareth Southgate and all of the players have done the nation proud and have the chance to finish the job off against Italy on Sunday. We’ll have stats, tips and offers for the game here on BettingOdds.com, but for now let’s just revel in the glory of England making it to their first major final in 55 years.