The news surrounding the proposed European Super League (ESL) is rife across social media today, with the vast majority of fans appalled at the idea of six Premier League clubs breaking away to compete in a closed-off division alongside Europe’s richest football clubs.

Arsenal, Tottenham, Manchester United, Chelsea, Liverpool and Manchester City have all agreed to participate in an ESL, which would see them join Juventus, AC Milan, Inter Milan, Real Madrid, Barcelona and Atletico Madrid in a division with no relegation and a split of the £4.6billion pot backed by American investor JP Morgan.

Fifa, Uefa, the Premier League, the Royal Spanish Football Federation (RFEF), La Liga, the Italian Football Federation (FIGC) and Lega Serie A have all condemned such plans and said that they will punish any team who joins the ESL by expelling them from their respective domestic leagues, cups and the Champions League.

Fifa have also said that any player who competes in the proposed European Super League could be banned from representing their country at forthcoming World Cups and European Championships. This, then, begs the question: if players from each of the Premier League’s ‘Big Six’ are unable to represent England at Euro 2021, who would step to the fore for the Three Lions in the summer? Below, we assess the potential options.

The players who compete in the proposed #EuropeanSuperLeague face being banned from international duty. #bbcfootball #ESL

This is a fairly straightforward one. With only one of the current three goalkeeping options for Gareth Southgate playing for a team in the ‘Big Six’, Manchester United’s Dean Henderson loses his place in the squad and in comes the deserving Sam Johnstone, who has been one of very few positives for West Brom this season.

Burnley’s Nick Pope and Everton’s Jordan Pickford remain in the squad and would battle it out for the No 1 starting slot. Should one of those be injured when the tournament starts, Sheffield United’s Aaron Ramsdale would most likely be called up.

From here on in it gets a lot trickier. The majority of England’s outfield options are players from the division’s bigger clubs. In this hypothetical scenario, where players from such clubs are banned from international football, the likes of Harry Maguire, John Stones, Kyle Walker, Trent Alexander-Arnold and Ben Chilwell all drop out of the squad - among several others - leaving Aston Villa’s Tyrone Mings, Everton’s Michael Keane and Wolves’ Conor Coady as the only players in the current crop.

West Ham’s Aaron Cresswell, Leeds United’s Luke Ayling and Villa duo Matt Targett and Ezri Konsa would all get a look in, while Burnley centre-back James Tarkowski and Everton’s Ben Godfrey would also be viable options for Southgate to take a look at. James Tavernier (80/1) has repeatedly impressed for Rangers in recent seasons and could be given a chance to prove his worth at international level under the circumstances.

With a number of players outside of the PL’s Big Six already regulars in the England squad, this is an area which would come out relatively unscathed. With it looking unlikely that Jordan Henderson will be able to participate as it is due to ongoing injury concerns, the only real loss would be Chelsea’s Mason Mount. However, Jesse Lingard would also miss out if he were to return to Manchester United instead of signing a permanent deal with West Ham or another club outside of the European Super League in the summer.

Declan Rice would start (depending on fitness) alongside Borussia Dortmund’s teenage superstar Jude Bellingham or Leeds United’s Kalvin Phillips, while Southampton’s James Ward-Prowse and Leicester City’s James Maddison would battle it out for the more advanced role in the heart of midfield, with Villa’s Jack Grealish a guaranteed starter on the left flank. Harvey Barnes would be an ideal candidate for the opposite wing, but it looks fairly unlikely that the Foxes wide man will be fit in time for the tournament kicking off in early-June. West Ham’s Jarrod Bowen (50/1) could therefore become a consideration.

This would undoubtedly be the area hardest hit if the mooted punishments were to come into play. England’s biggest goalscoring threat and talismanic force up front would be taken out of the equation with no Harry Kane, while Manchester City duo Raheem Sterling and Phil Foden would also be huge losses.

Furthermore, the Manchester United pairing of Marcus Rashford and Mason Greenwood - who continues to strengthen his claims for selection week after week - would also severely weaken the national side at Euro 2021.

With no German clubs agreeing to the proposed European Super League as things stand, Borussia Dortmund winger Jadon Sancho would still be eligible for England selection. Alongside the 21-year-old in the forward's department would be Everton’s Dominic Calvert-Lewin, Southampton’s Danny Ings, Aston Villa’s Ollie Watkins and Leeds’ Patrick Bamford - who between them have scored 49 league goals in 2020-21. Not a bad line up, in fairness.

Newcastle front man Callum Wilson (33/1) became a regular in the Three Lions squad back in 2018, and would surely force his way back into contention should this disastrous situation actually come to fruition, while West Ham striker Michail Antonio (20/1) - who earlier this year revealed that he was switching his allegiance to Jamaica in a bid to play at the 2022 World Cup - would be thrown right back into consideration.

Antonio is yet to play for Jamaica so could reverse his decision and choose to represent England if he desired, and has enjoyed a solid campaign for West Ham this term, scoring seven goals as the Hammers vye for a place in next season’s Champions League.

Who do you think would get the nod if all Big Six players were to become suspended from international football, and what would your starting line-up be? Let us know by Tweeting us @BettingOddsUK!

This is what we've chosen... 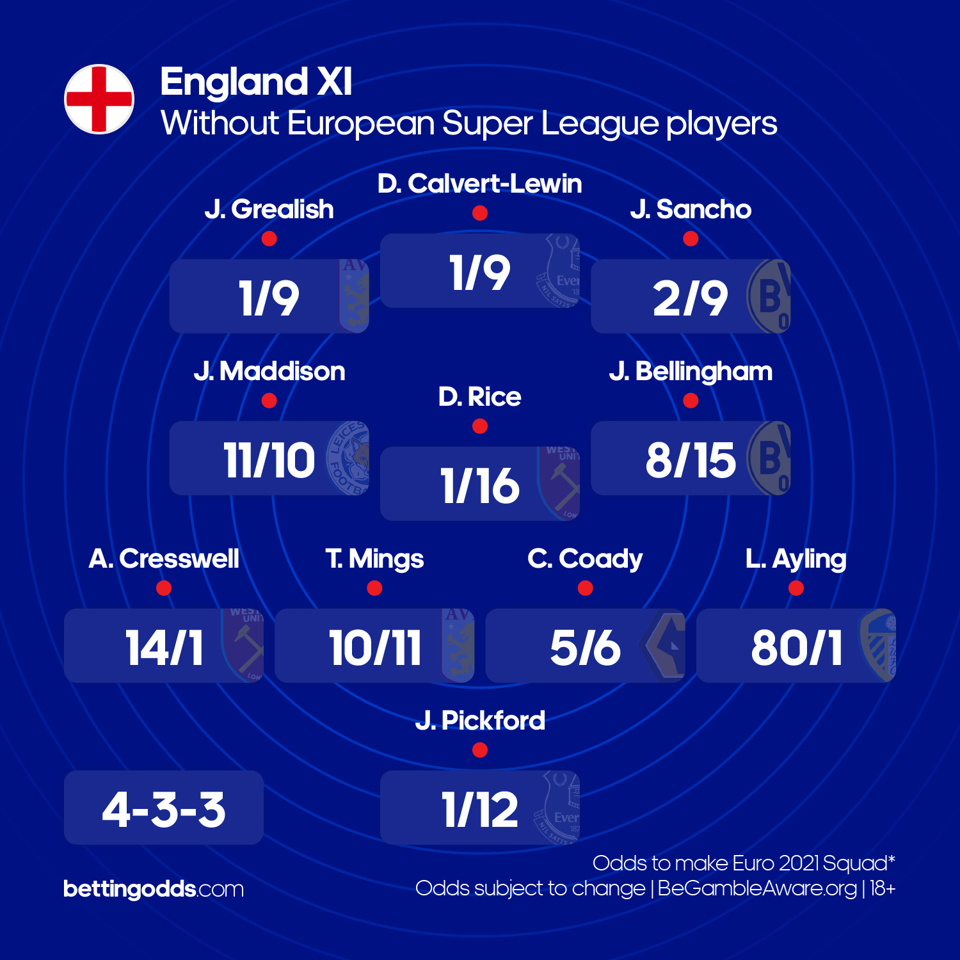