Let me take you back to a distant time. A year of two still-breathing Popes, when Edward Snowden first lifted the lid on the Stars & Stripes’ scheming, we said goodbye to Nelson Mandela, there were some Blurred Lines and boobs, Frozen either made you Let It Goooooooooo, or ice-cream scoop out your eardrums, and it was, apparently,  the International Year of Quinoa.

But more importantly, it was the last time Manchester United, English football’s most successful institution and export, won the Premier League.

April 23, 2013, was the last time United celebrated being the best in England.

A flock of fantastic footballers, most of whom would fly soon to enter retirement, punditry, pastures new or simply fade away. That distinguished register of departed Devils: Michael Carrick. Wayne Rooney. Patrice Evra. Rio Ferdinand. Nemanja Vidic. Phil Jones (wait…is he still there?!).

The record-13-time champions haven’t reached the summit since. In the first 10 years of the Premier League, Man Utd won 7 titles. In the past 10? Just one.

So why will 2021/22 be any different? Well, here are five reasons why Ole Gunnar Solskjaer can lead his current crop to glory (17/2, Paddy Power)… 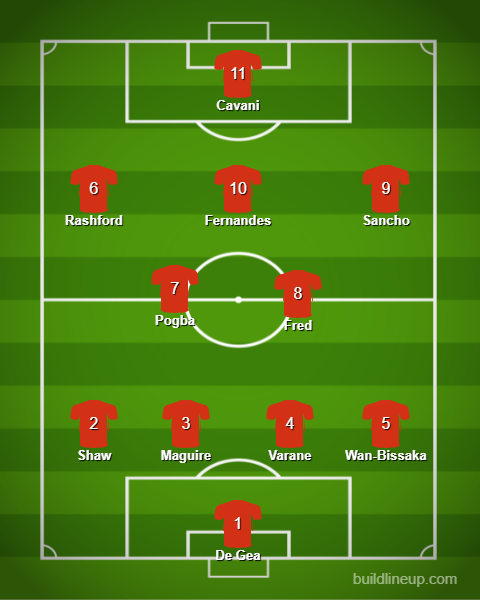 This could be Man Utd's potential lineup for next season.

1. Believe In The Process

Yes, the likes of poor Arsenal may have exhausted this already-tired mantra but there is a highway-gleaming route leading to a stunning sunrise of optimism right down Sir Matt Busby Way.

Like a sculptor chiseling away at a rock in the construction of something greater, Solskjaer’s refining of a salmagundi squad still bleeding and bruised from the preceding Louis van Gaal and Jose Mourinho regimes, may be one of his most impressive feats thus far (and further credit to those once mocked now succeeding elsewhere).

🗣️ Solskjær on starting the season well: "The first 6-7 [Premier League] games are very important, you can lose the chance to win the league." [MUTV]

Though of course, if this will be the Norwegian’s ultimate achievement in his time in the precious Man Utd hot seat, it will be an achievement of failure.

With the European Championships still fresh on the mind, it is also important to consider that Gareth Southgate has proven once again that good managers come in different forms.

Whilst Solskjaer may not have the intrinsic tactical acumen of some of his Premier League contemporaries, his true qualities lie elsewhere: the unpurchasable ability to instil belief, harmony, collectivity. Brotherhood, as one, for the greater good.

And speaking of which…

But the Red Devils knew that he was a baller after his very best season in the United red since moving to Old Trafford as a teenager in 2014.

His England partner-in-crime Harry Maguire has probably the most perfect head designed for football it may as well have been constructed by Zeus himself.

Jadon Sancho may have not bagged a bucket-load of minutes at this summer’s tournament, but he’s still a player who has 41 league assists in his last three seasons.

With the potential arrival of Bury-boy Kieran Trippier back from Spain to support both the still-fledgling Aaron Wan-Bissaka and Luke Shaw at full-back, Solskjaer will not just have helped construct and harnessed the strength Southgate conjured, that went the distance this summer will a substantial Red contingent, but should well profit from for the forthcoming season to reunite United with the title.

In Paul Pogba they have a World Cup winner, and expected to soon be joining him is Les Bleus compatriot Raphaël Varane - one of the best and most decorated defenders of the past decade.

Varane, bringing with him a suitcase of success, an envoy of experience. The man who the Frenchman is likely to replace in the United backline, one Victor Lindelöf, could very well benefit, away from intense eyes and criticism on a weekly basis to prove himself an invaluable squad player as United compete on four fronts.

Manchester City proved in the past season what a benefit the ability to rotate three world-class centre-backs can be.

Note that Lindelof - though certainly would never be considered on par with Maguire, Varane, Stone, Laporte, or Dias - had an extremely stable European campaign with the Sweden squad. There is Strength in Numbers.

Where each Premier League manager stands ahead of the new season

Man Utd had a total of 10 players participating at Euro 2020 - which concluded with just over little more than a month before the start of the new Premier League season - and three first-teamers at the Copa America.

That number is two fewer than Man City.

City’s internationals played a gargantuan 2099 minutes and 23 games more combined; a 38 and 33% increase on United, respectively.

Could Solskjaer’s men profit from a Blue Burnout?

City have to cope with the routinely swelling expectation of having to conquer the Champions League having spent close to £800million under Pep Guardiola without ever having done so.

Teams have taken advantage mainly when Man City have failed to adequately resupply in the summer and at the time of writing despite the rumour mill swirling around the Etihad, the defending champions have yet to adequately dip their toes in the market.

Pep Guardiola may be chatting serious waffle in proclaiming that the best-bunce-backed club in world football can’t afford a new striker, but should his words possess meaning it will undoubtedly be a blessing for United’s aspirations.

If United can just eradicate those niggling errors, those seemingly invisible sleeping policemen who stutter progression - shudder at the thought of an aged Crystal Palace and doomed Sheffield United at the Theatre last year - and Solskjaer maintains his prolificacy to outsmart those considered of greater mind, then those already respectable points tallies will shoot up.

Third in his first full season. Second in his second. In the piddly little pyramid pursuing prediction, surely that is leading to First in his third?

Teams no longer win the Premier League with 70 and 80 point tallies. The champions are now ones of simply mammoth hauls. It is no longer about the amount of wins but how few the losses.

There was an eight point leap for Man Utd between 2019/20 and 2020/21. Taking advantage of the next suggestion on this list, continuing on this trajectory for that increase per season, may take United’s own haul from respectable to royal.