With just over five months remaining until this summer’s delayed European Championships take place, there are a host of English players in the Premier League all vying for the attention of Three Lions boss Gareth Southgate in the hope that they will be considered for selection.

One of them is Leeds United striker Patrick Bamford. The 27-year-old is so far un-capped at senior international level and had never even been considered for a call-up prior to this season.

Indeed, following a promising opening half to his campaign this time out, the Whites front man is certainly making himself difficult for Southgate to ignore and is now 20/1 to make the final squad for this summer's tournament.

Bamford has scored 11 goals (four assists) in the Premier League so far, third only behind Mo Salah (15), Harry Kane (12), Son Heung-min (12) and Bruno Fernandes (12) in the race for the Golden Boot at the time of writing.

The former Chelsea man has scored more goals than the likes of Wilfried Zaha, Callum Wilson, Alexandre Lacazette and Sadio Mane throughout the first half of the season, while he is on the same tally as Jamie Vardy and Dominic Calvert-Lewin; not bad for a player who has considerably less top-flight experience.

While Harry Kane is a nailed on certainty for selection this summer - barring any injuries - and Marcus Rashford will be taken to the Euros as a secondary striker as well as a winger, there is still a slot available in the forwards department for an out-and-out striker in Gareth Southgate’s final squad.

The berth is currently open to a number of players, including Calvert-Lewin - who enjoyed a tremendous start to his campaign but has since tailed off slightly - Southampton’s Ings, Aston Villa’s Ollie Watkins and Chelsea’s Tammy Abraham.

Unlike most of those players, though, Bamford is yet to earn his first England call-up and is significantly less experienced at international level. He has also made just 47 appearances in the Premier League throughout his entire career, which is a lot less than the likes of Ings, Abraham and Calvert-Lewin have, potentially putting him at a disadvantage when it comes to selection.

Soutgate has, however, always picked players on form and right now, with Kane injured and Vardy retired from international football, Bamford is statistically the most prolific English striker in the Premier League.

His performance during Leeds’ 3-1 win over Leicester at the weekend, where he scored once and assisted twice, demonstrated a level of maturity we have not seen too much of before, from a player who has often been criticised for his composure in front of goal.

It is also worth noting that just one of Bamford’s 11 goals this term have come from the penalty spot, ranking him joint-third in the division’s list of top scorers excluding spot-kicks, while his non-penalty xG total of 10.8 is the highest of any player in the Premier League this season, proving that he is capable of getting in positions to score. 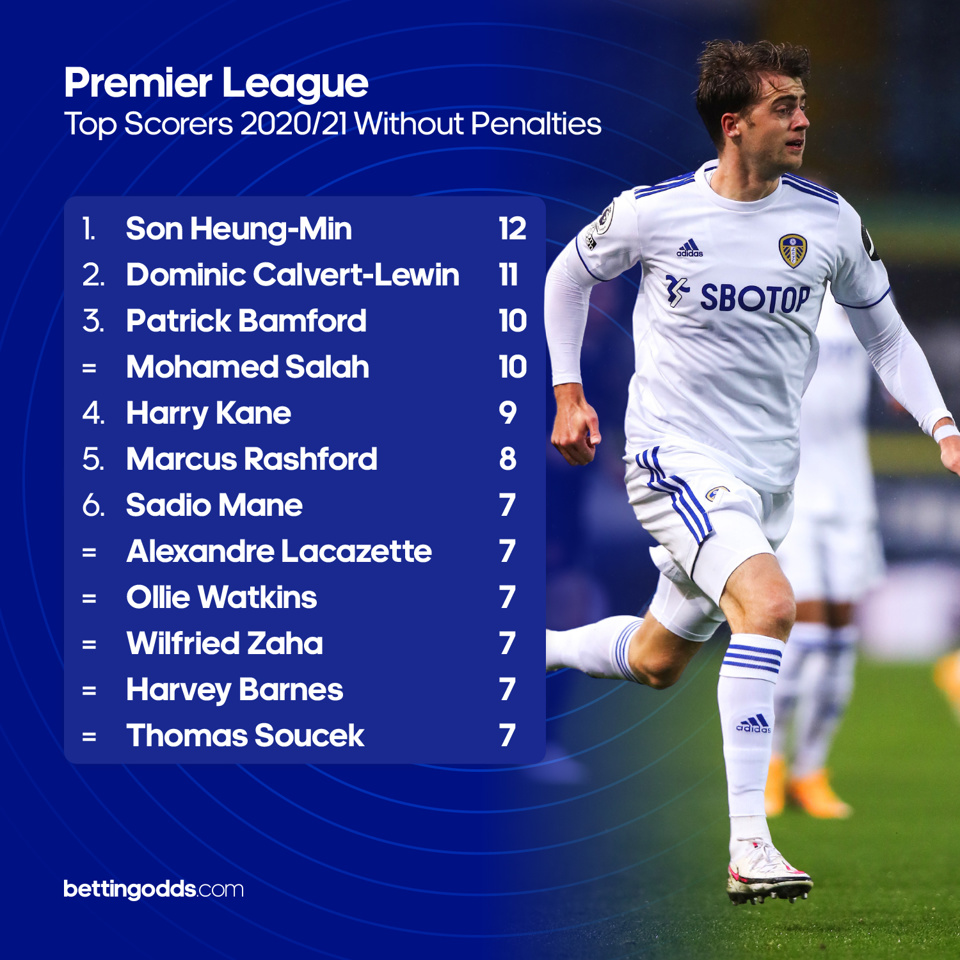 Interestingly, Bamford’s stats this season bear a striking resemblance to Jamie Vardy’s. Of all the forward players to have played more than 1000 minutes in the PL this season, the Foxes marksman has the highest proportion of touches in the opposition box (24%) and the lowest touches per 90 minutes (24).

The next in both categories? Bamford with 22% of touches in the opposition box and 25 touches per 90. In fact, the Leeds striker has attempted a shot with 14% of his touches in the league this season, followed by Jamie Vardy (12%).

With Vardy ruling himself out of selection for the Euros, could Bamford be the closest option Southgate has to effectively replacing the Leicester star?

🏴󠁧󠁢󠁥󠁮󠁧󠁿 “I'd never have dreamed of even being mentioned for England.”

🙌 “The fact Southgate said that he was watching me was a big boost.”

@Patrick_Bamford is determined to do all he can to get an England call-up!

Would you like to see the #LUFC striker in the England squad? 🤔 https://t.co/hr4eaJV4Rd

Despite a marked improvement in 2020-21, Bamford is still missing a good chunk of chances in the final third.

His goal conversion rate of 20% is the second-lowest when you take a look at the top-10 leading goalscorers in the Premier League, and less than three of his main striking counterparts: Ings’ (29%), Calvert-Lewin (27%) and Abraham (24%) - although it is ever so marginally better than Watkins’ (19%).

On the flip side, Bamford has more assists (4) than each of his main rivals for the final spot in England’s attack this summer, and while things could all change drastically in the coming months, right now it seems harsh to rule the 27-year-old, whose career looked to be completely flatlining just two years ago, out of the running.

He certainly deserves a call-up for the upcoming World Cup qualifiers next month, as the Three Lions take on San Marino, Albania and Poland. Then, the rest is down to him.

Try out our latest quiz!

With Bamford potentially earning an England call-up soon, we thought we'd test your knowledge on Leeds players - past and present - who have represented the Three Lions whilst playing for the West Yorkshire side since the year 1990.