The 22-year-old was a 25/1 outsider just two months ago but his continued excellence in the Premier League has now made him a standout candidate for international selection.

Justin has played every single minute of top-flight action this season, as the Foxes aim to secure a spot in next season’s edition of the Champions League - something they are currently well on track to do as they sit third in England’s top table after 23 games.

The East Midlanders’ current league position is largely down to the performances of Justin, alongside a number of their key performers. And while the likes of James Maddison, Harvey Barnes and Jamie Vardy may well scoop the plaudits on a weekly basis, it is the Luton-born defender who has perhaps impressed the most this time out.

The former Hatters full-back has been part of a back-line to have kept nine clean sheets so far - behind only Chelsea (10), Aston Villa (11) and rampant leaders Manchester City (13) in this regard, though it must be noted that Villa have played two, and City one, game/s fewer at this stage.

Justin ranks second in the Premier League for successful tackles completed in 2020-21 with 61 (on average 2.7 per game), behind only Manchester United’s Aaron Wan-Bissaka who currently has 66 to his name (3.1 pg) - unsurprising given the tough-tackling nature in which the Red Devils man operates.

That is just under double the amount Chelsea’s Reece James has completed in 17 outings (31, 1.8 pg), while England’s first-choice option, Trent Alexander-Arnold, has a significantly lesser total with 27 overall (21 games, 1.3 pg).

For the record, Kieran Trippier has made 28 successful tackles in 14 La Liga appearances for Atletico Madrid this season, an average of 2 per game, and Manchester City’s Kyle Walker has managed just 20 this term in 15 games (1.3 pg). While it can be argued that Justin has played more minutes than the aforementioned players, his tally is so far ahead that the statistics still massively favour his cause. 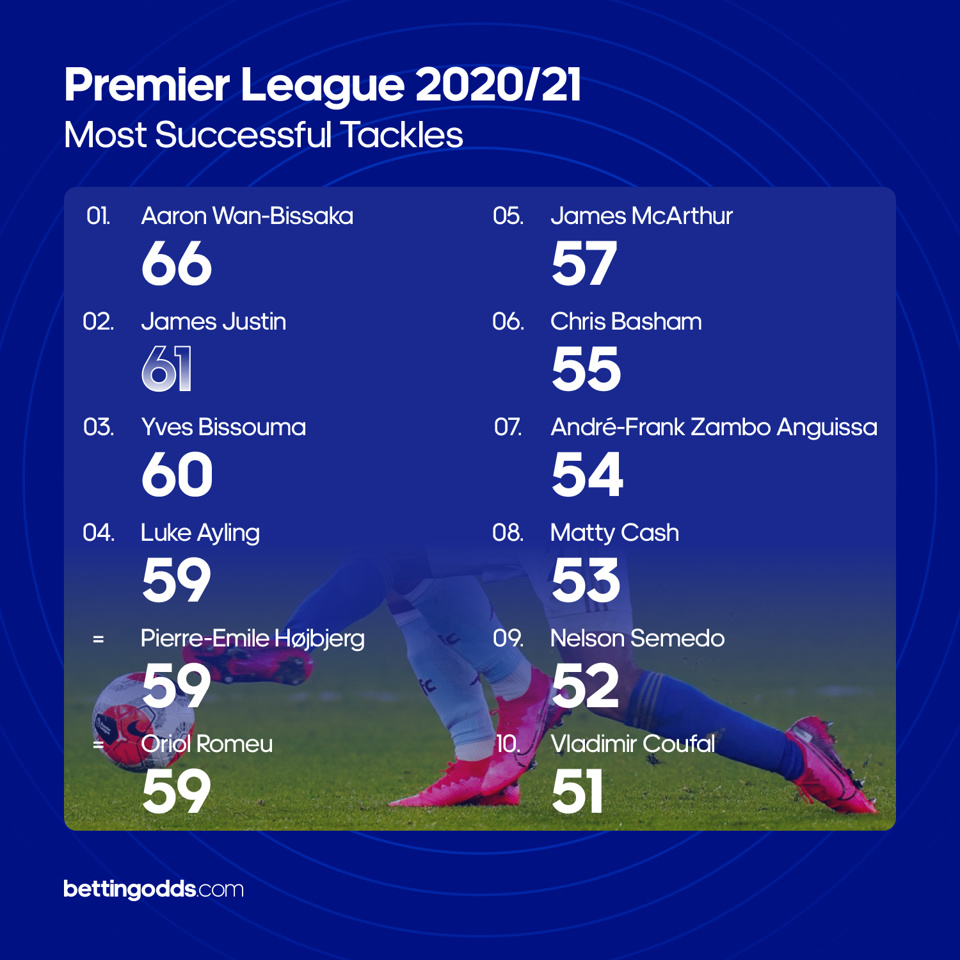 It is Justin’s versatility that has impressed me the most this campaign, though. The England hopeful is adept at playing right the way across the defensive line - as he has demonstrated on numerous occasions this season - alongside at wing-back on either flank should Brendan Rodgers opt to play a 3-4-3 formation as opposed to a 4-2-3-1, which he has regularly done throughout the previous five months.

Breakdown of games by position - all competitions

👏 “He's the type of full back that wants to be adventurous.”

🙌 “Leicester is the perfect set up.”

👀 “If you said Chilwell or Justin, he's quicker than Chilwell & has a bit more...”

Despite some of his most impressive performances and stats coming from his appearances at left-back, Justin’s predominant position actually at right full-back, as a forward-thinking defender who always looks to press high up the pitch and join in when Leicester are on the attack.

This season the eight-capped England under-21 international has scored three goals and provided two assists for Leicester in all competitions, with his stunning solo effort during the 4-0 FA Cup win over Stoke in January’s undoubtedly the stand-out effort.

James Justin, that is magnificent! 🎯

Josef Bursik could only stand and watch in the Stoke goal...

With the form of Trent Alexander-Arnold beginning to waiver this season as Liverpool struggle to retain their crown as Premier League champions, Reece James struggling with his consistency at Chelsea and Kieran Trippier currently serving a 10-week ban for breaching FA betting guidelines, there is a chance for Justin to force his way into manager Gareth Southgate’s plans this summer.

Kyle Walker is finding regular game-time hard to come by at Manchester City but the Three Lions stalwart will most likely be taken to the Euros as a right-sided centre-back rather than a full-back. The main competition for Justin right now is Wan-Bissaka, who is also currently enjoying a terrific run of performances at the minute for Manchester United.

Regardless of form this season, you have to feel as though Alexander-Arnold’s previous displays for club and country will be enough to earn him a call-up in June. Indeed, the back-up slot is still up in the air and with Justin’s versatility considered, he might well be the best option Southgate has available at this moment in time, and is definitely deserving of a chance to showcase his talents on the main stage.