The months are ticking by at an alarming rate at the moment, and while we should all be reluctant to wish our lives away, it’s difficult not to with the distant hope of pubs, gyms and grassroots sport returning in the spring.

The European Championships will be here before we know it, too, and soon Gareth Southgate will have to select his final 23-man squad for the delayed tournament. With such a plethora of English talent available to the Three Lions boss, it certainly won’t be an easy decision for him to make.

While some names are nailed on certainties for selection, there are a number of players on the periphery that could well be called upon should their impressive form at club level continue from now until the end of the season.

Join BettingOdds.com, as we assess four players who each have an outside chance of being called up for this summer’s tournament.

Prior to this season the name Curtis Jones would have been unrecognisable to most. Indeed, throughout the first half of 2020-21 the Liverpool midfielder has really started to make a name for himself in the Premier League.

With his opportunities limited to the odd EFL and FA Cup appearance during the Reds’ emphatic title-winning campaign last time out, Jones has seen a significant increase in minutes this time around due to the Merseyside club’s injury woes.

And he is yet to disappoint. The 20-year-old has displayed a level of maturity beyond his years with his performances this term, scoring three goals and providing four assists in all competitions for the reigning top-flight champions.

The England U21 international has started 18 games for Liverpool this season, five of which have come in the Champions League. His latest contribution was a 90 minute shift against RB Leipzig in the first leg of Liverpool’s last-16 tie against the Germans, where he provided a slightly fortuitous assist for Sadio Mane to settle the game in Hungary.

Central midfield is certainly not an area England are lacking in terms of quality but Jones’ performances will definitely be capturing the attention of Southgate & Co. His price to make the Three Lions’ final squad for the Euros was 33/1 in the summer but that has now been slashed to 5/1 by bet365, suggesting he has been backed in by a flurry of punters who’ve been impressed with what they have seen from the Reds youngster this term.

Curtis Jones' development over the past 12/18 months has been absolutely immense. From being an option in the domestic cups to shining at the highest level. #LFC

Jesse Lingard’s career in an England shirt looked all but over a matter of weeks ago but the 28-year-old seems to have been given a new lease of life at new club West Ham. The out-of-favour Manchester United playmaker has linked up with the Hammers on a loan deal until the end of the campaign and is flourishing in his new surroundings.

Lingard has played just three times for his temporary employers but has already scored twice and laid off an assist in the club’s recent wins over Aston Villa and Sheffield United. It is clear that he is relishing the opportunity of being a team’s main creative spark once again after such a prolonged period of disappointment at Old Trafford, where he had failed to make a single appearance in the league or Europe this season.

While Lingard certainly has a long way to go if he is to break back into the England fold, he is back on the right path in the capital. Bet365 had him at 50/1 to make Gareth Southgate’s Euro 2021 squad just last month, but he has now been cut into 8/1 after his impressive start at the London Stadium. Should this type of form continue, there’s nothing to say that Lingard will not be viewed as a serious candidate for selection in the summer.

This next one is an interesting proposition. Aston Villa’s young centre-back Ezri Konsa is gaining notoriety for his performances alongside Three Lions regular Tyrone Mings in the heart of the West Midlanders’ defence this term, with many now discussing him as a potential pick for England at the forthcoming Euros.

Konsa has been capped seven times at U21 level but is eligible to represent DR Congo, Angola and Portugal at senior level through his parents - with the latter reported to be keeping tabs on the 23-year-old ahead of this year’s competition.

Part of a back-line which has kept 10 clean sheets in the Premier League and has conceded the second-fewest goals behind only Manchester City, it’s clear to see why there is so much talk of Konsa’s potential involvement in the senior England set-up.

The ex-Brentford man has seen his price in the market cut from 33/1 to 16/1, and with realistically one centre-back slot up for grabs behind Harry Maguire, John Stones and Mings, there is every chance that Konsa will be afforded his chance at the big time in the coming months.

West Ham left-back Aaron Cresswell is a man who has seldom been linked with England selection in recent years. Despite earning three caps for the national side in 2016, the 31-year-old’s inconsistency at club level has seen him continually overlooked for an international recall.

This season, however, Cresswell has been one of the key cogs in a West Ham side that have taken the Premier League by storm under David Moyes. The former Ipswich defender has been part of a defence that have managed nine clean sheets in the top-flight, but it is his attacking stats that have impressed the most this term.

With six assists, Cresswell has provided more lay-offs than any defender in England’s first division this season - ahead of the likes of Andrew Roberton, Lucas Digne and Trent Alexander-Arnold. Solid defensively and a real asset in the attacking third, the Liverpudlian has been practically flawless this season and is perhaps deserving of another chance in the Three Lions set-up.

With Chelsea’s Ben Chilwell seemingly falling out of favour under new Blues boss Thomas Tuchel, there could well be an avenue worth exploring in the left-back department this summer. Luke Shaw and Bukayo Saka offer plenty of top-quality competition in this area and Chilwell will no doubt regain his position in Chelsea’s XI before long, making Cresswell very much an outside shot at this stage, but at 20/1 it is one that would perhaps be foolish to be ignored. 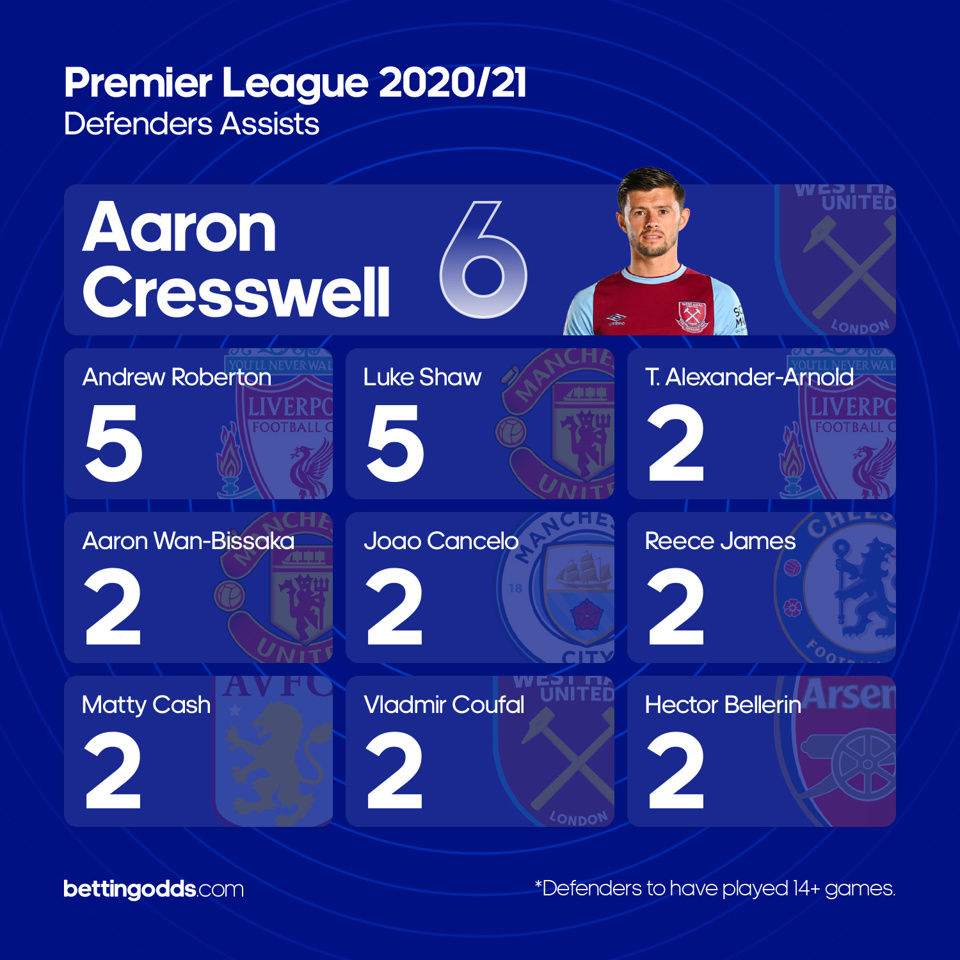 With all things considered, Ezri Konsa looks like the best play in our opinion. While there are a number of talented centre-backs in the England fold, there's still one - potentially two - slots available for another player to break into the squad this year.

Konsa has proven his quality with Villa this term and could well opt to represent Portugal if England do not snap him up. At 16/1, his odds have shortened considerably but it is still a decent price given the hype around him right now.