Euro 2021 Player of the Tournament Betting: The England skipper is an attractive price in the market
By Callum Pragnell
16:35 Wednesday 3rd March 2021 - 5 minute read

Euro 2021 is now officially just 100 days away, can you believe it! A tournament that has seemed cursed for the previous 12 months is now within touching distance and we can barely contain our excitement for what lies ahead; let’s face it, we all deserve something to smile about after the last year of utter chaos, don’t we?

Regular readers of BettingOdds.com will have noticed that we have really started to ramp up the European Championship content in recent weeks, and that continues today as I’m going to be taking a look at the ‘Player of the Tournament’ market to see which players have been priced up as favourites to win the award this summer.

So, who are the favourites in the market?

The player I want to focus on is England’s very own Harry Kane. The Three Lions skipper is fourth-favourite in the market at 16/1 and that price seems as though it could represent some great value when you take a look at his numbers this season so far.

Kane has netted 14 goals in the Premier League alongside a further eight in Europe and domestic cup competitions combined. But what has been most impressive about the Tottenham talisman is how many assists he has provided for the north Londoners; Kane’s role in Jose Mourinho’s Spurs side is as much about creating chances as it is about scoring them and that has been abundantly clear this time out.

With 14 assists in all competitions (11 in the PL), Kane tops the pile for lay-offs in the top-flight alongside De Bruyne, who also has 11 to his name after his sumptuous ball to the head of Ruben Dias in City’s 2-1 win over West Ham at the weekend.

Furthermore, Kane’s combined goal contribution at club level this season stands at 36 (goals + assists in all competitions), which ranks him higher than the other favourites currently heading up the betting in this market; Mbappe being the closest to his season-total with 32 goal contributions for Paris Saint-Germain at the time of writing. 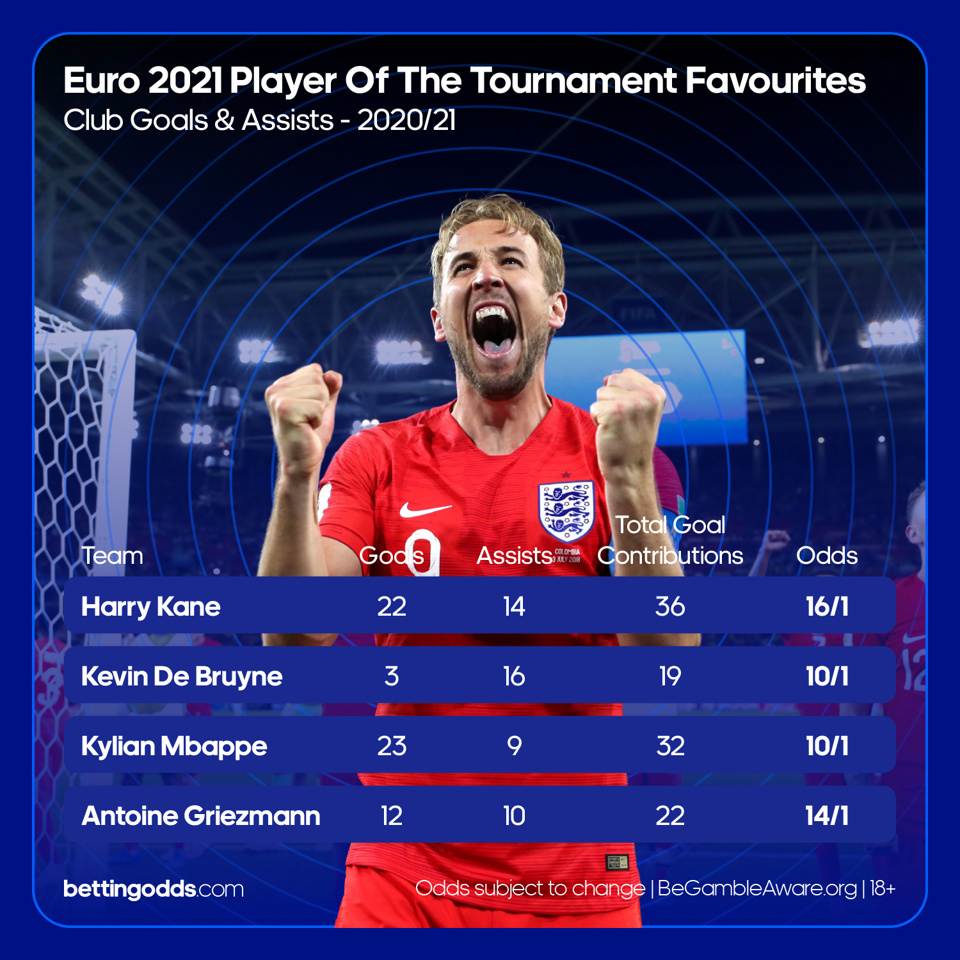 History has a tendency to repeat itself

Whether you agree with it or not, England are the favourites to win Euro 2021 with most bookmakers at 5/1, and typically the claimee of this award is chosen from the team who wins the tournament or at least reaches the final - something the Three Lions have a fantastic chance of doing this summer.

Kane may have only featured at two major international tournaments in his lifetime but his record at those tournaments speaks for itself. After a disappointing Euro 2016 campaign, the 27-year-old was fantastic at the 2018 World Cup, scoring six goals as England reached the semi-finals of the competition which in turn saw him win the Golden Boot award.

The Spurs front man is the current favourite in the Euro 2021 top scorer betting at 6/1; ahead of the likes of Romelu Lukaku, Kylian Mbappe and Cristiano Ronaldo et al which comes as no surprise when you consider the amount of service he should theoretically receive from the Three Lions’ star-studded supporting cast this summer.

Indeed, if he does outscore his fellow professionals and England do enjoy a promising tournament, then there’s little reason why he shouldn’t be a genuine contender to pick up the Player of the Tournament award as well.

Playmaker role could be the difference

As briefly touched on, Kane’s role for Tottenham this season has seen him operate almost as a deep-lying playmaker in the final third, as well as the leading man in a three-pronged attack, proving that he is such an intelligent all round player rather than just a deadly finisher in front of goal. Take his average ball-receiving positions from his performance during the first half of Spurs’ 3-3 draw with West Ham back in October as a prime example of how much Kane's game has changed in 2020-21: 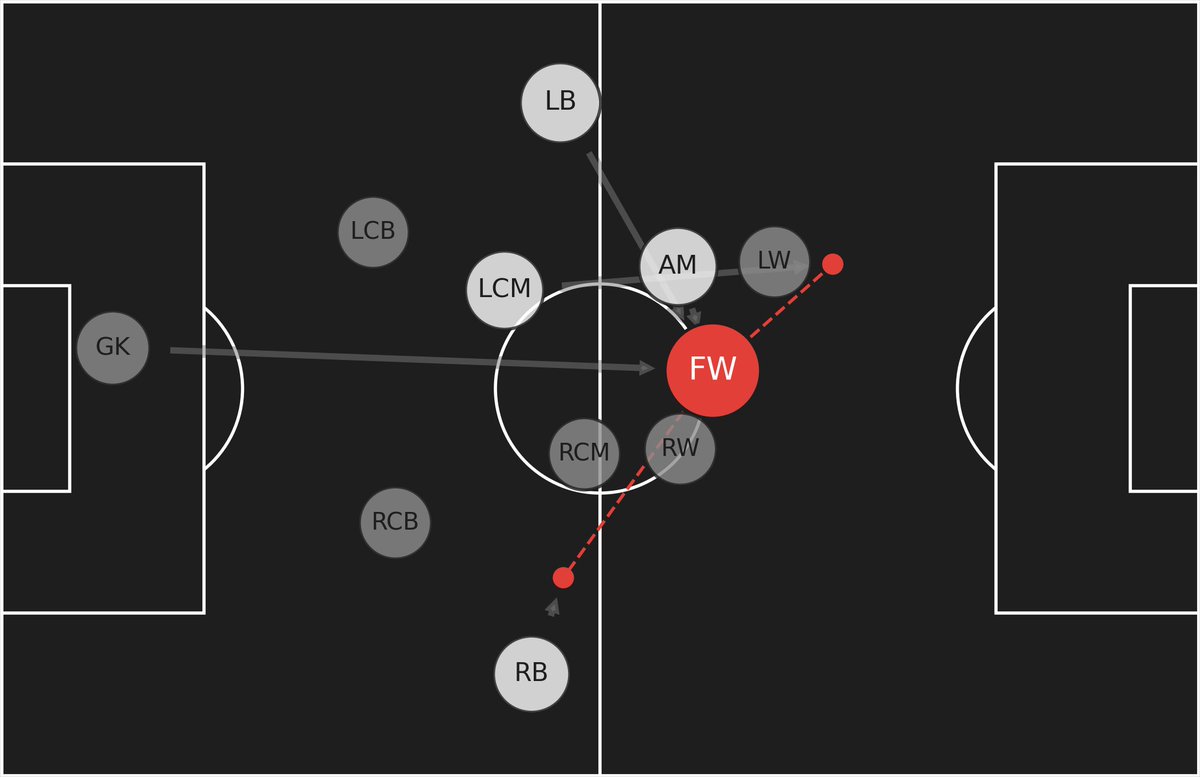 Playing as a nine-and-a-half, controlling the game and getting plenty of service from Reguilon.

Son and Bergwijn playing narrow give the full-backs plenty of space to get forward https://t.co/5wJr0wnbJW

Kane plays deeper to fit Mourinho’s system at Tottenham and frequently links up with Son Heung-min to create goalscoring opportunities, almost like an attacking midfielder would do as the link between midfield and attack.

But imagine the damage he could do with the likes of Raheem Sterling, Jadon Sancho, Marcus Rashford, Phil Foden and Jack Grealish (the list goes on) making clever runs for him in behind.

We have seen glimpses of this type of link up play in recent international matches, but so far we haven’t experienced this version of Kane at a major tournament, playing alongside some really exciting players who are yet to feature for England at either the Euros or a World Cup.

It is, on the face of it, an extremely exciting proposition, and one which will only bolster Kane’s chances of being crowned the tournament’s best player in the summer, should his exemplary assists-return continue beyond the domestic campaign finishing in May. At 16/1, he could well be worth getting behind.