England’s potential route to the final of Euro 2021 explained 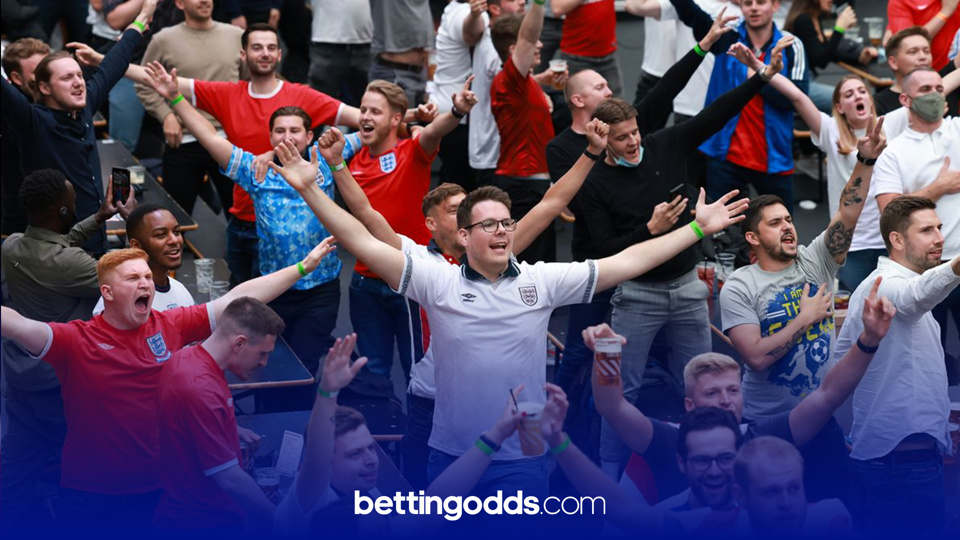 England have now secured qualification to the last 16 of Euro 2021 as winners of Group D. The Three Lions made it four 1-0 wins from five on Tuesday evening, beating the Czech Republic at Wembley thanks to a Raheem Sterling header early on. But who will they play in the run up to the final? We take a look at the potential run-in below. 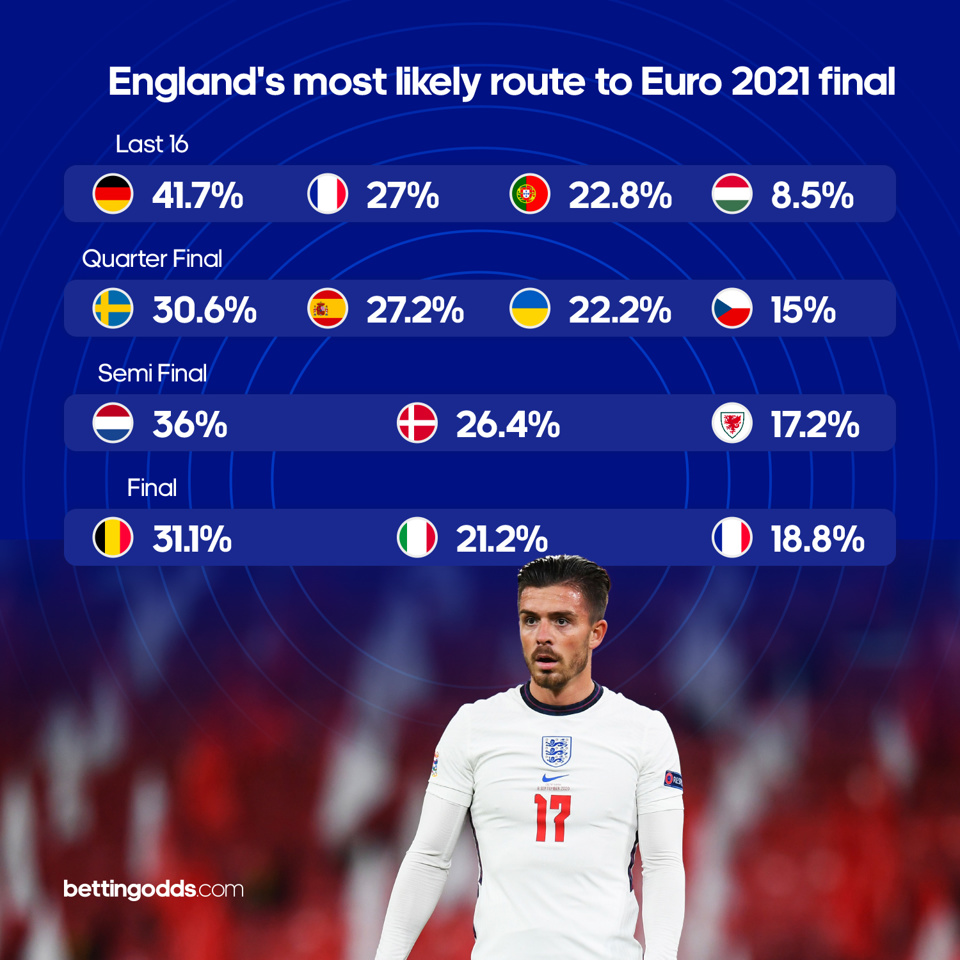 Gareth Southgate’s men will now face the runner-up of Group F in the first knockout stage next Tuesday - most likely to be one of Germany, Portugal or France barring a hugely unlikely late surge from bottom side Hungary in this evening’s final group stage encounter.

Germany are fancied to finish second in Group F and have therefore been given a 41.7% implied chance of being England’s opponents next week based on the World Football Elo Ratings - a system which takes various football-specific variables into account, like the margin of victory, importance of a match, and home field advantage.

France, currently top of Group F, play Portugal this evening with a win securing their position as group winners. Should they lose that clash, however, and Germany beat Hungary as expected, Les Bleus will finish as runners-up and Joachim Low’s side will win the group. This result would see France play England in the last 16 and has been given a 27% chance of happening according to the Elo Ratings.

Portugal’s 22.8% chance of facing England in the next round would come to fruition if they draw with France in this evening’s tie, and Germany lose to Hungary in theirs.

So, assuming England beat whoever they face in the last 16 (optimistic, I know), the Elo Ratings suggest Sweden (30.6%) will be the Three Lions’ opposition in the quarter-final, in what would be a repeat of the 2018 World Cup. This could all change drastically given Group E still also have one game remaining and the goalposts could shift depending on this evening’s results.

As it stands, though, with Sweden qualifying as group winners, they would face one of the third-placed qualifying teams in the last 16, and should they win that clash would then face England in the QF.

Spain (27.2%) could easily change all this with a victory against Slovakia this afternoon. Should Luis Enrique’s men win that do-or-die clash, and Sweden fall to a defeat against Poland, the Euro 2008 and 2012 champions would become England’s likely opponents in the quarter-finals, providing they also win their last 16 tie against whichever third-placed team they are pitted against.

Now it’s really starting to heat up. If, in this hypothetical (and incredibly hopeful) situation, England make it through to the semi-finals, their most likely opponents would be the Netherlands (36%), who would have beaten Czech Republic or the team who finish third in Group F - likely to be Portugal - in the last 16 before knocking out either Wales or Denmark in the quarter-finals.

Denmark are given a 26.4% chance of playing England in the semis, but they face a stern test against Wales (17.2%) in the last 16 this weekend and an even bigger one against the Netherlands in the quarters should they progress past Rob Page’s side, especially given how strong the Dutch have looked at the tournament so far.

Wow, we made it. A series of 1-0 wins has seen England through to the final of a major tournament for the first time since 1966 without a single goal conceded. Dreamland. Okay, so it’s a stretch, but let’s say we do make it to the final hurdle; who would we play?

The Elo Ratings make Belgium the most likely opponent for Southgate’s hearty Lions at 31.1%. Roberto Martinez’s side play the best performing third-placed team from either one of Group’s A, E or F (most likely one of Poland, Slovakia, Spain or Portugal) this Sunday before going up against the victor of Italy v Austria in the quarter-finals.

Should that prove to be Italy as many predict, we will have a corker on our hands in the form of Belgium v Italy in the quarters. The winner of that tie will progress through to the semi-finals where they will most likely play France, who would have beaten either Switzerland, Finland or Ukraine in the last 16 before seeing off either Croatia, or the runner-up from Group E - which is yet to be decided but definitely one of Spain, Sweden, Poland or Slovakia - in the quarters.

Somewhat surprisingly, the ratings give both Belgium (31.1%) and Italy (21.2%) a better chance of progressing against France (18.8%) in the semi-final despite the fact neither have appeared at a major tournament final in the last eight years. This is most probably due to the fact they have not 100% qualified as of yet with still a game to play in the group stage this evening.

So, it’s as simple as that. We’ve now won the European Championships. Get in.