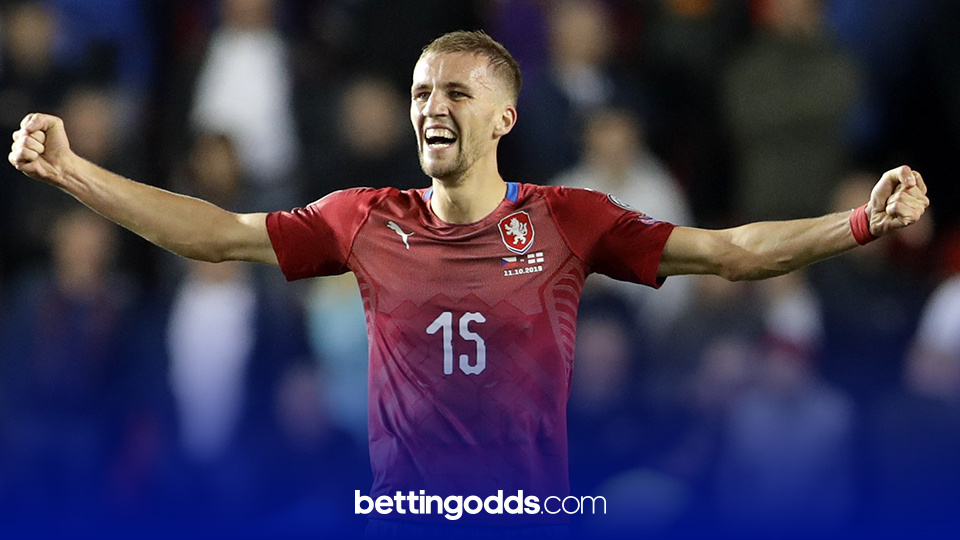 Tomas Soucek has been a stand out performer for West Ham this season and will be key for the Czech Republic at Euro 2021
By Anthony Eadson
09:46 Thursday 29th April 2021 - 5 minute read

The Czech Republic’s greatest successes in International football have both come at European Championships, reaching the final back in 1996 before Pavel Nedved and co managed a third placed finish at Euro 2004.

England, Scotland and Croatia will be the opponents for the Czech Republic in the group stage which on paper looks particularly tricky. I do think there’s hope that they can qualify as one of the best third placed finishers and the game with Scotland will most likely have the deciding say on this.

I wouldn’t read too much into the pairs meeting last September where Scotland came out on top after the Czech’s had to field a completely different XI to planned due to Covid-19. Should they advance from the group as one of the best third place finishers, a round of 16 tie with Spain or Belgium would be most probable.

There’s only one place to start when it comes to the main men in the current crop of Czech talent and that’s with Tomas Soucek. The midfielder has had an outstanding season with the Hammers and has been a major factor in their remarkable campaign which has led to them challenging for the European qualification spots.

The 26-year-old has scored nine Premier League goals in his first full season in London and at the time of writing no player has scored more for David Moyes’ side. Soucek also leads the way for club and country when it comes to cards this season picking up eight yellows and one red.

At just a snippet at £5m, Vladimir Coufal looks one of the signings of the season in the Premier League. Arriving from Slavia Prague, just like his mate Soucek, Coufal has had an outstanding first season in England. The right back has provided five assists and has put in some really eye catching performances, the way he has settled into his new surroundings of one of the most competitive leagues in world football is particularly impressive.

Tipped to be one of the brightest talents in European football after his breakthrough season at Sampdoria, Patrik Schick may not have hit the heights that many expected but the now 25 year old can play a key role for his country at Euro 2021. The forward has hit nine goals in 28 Bundlesiga appearances for Bayer Leverkusen this term after notching ten in 17 in the previous campaign for RB Leipzig.

The Czech Republic will have one of the oldest squads at the European Championships and young David Zima is a player who we could see. The 20-year-old who plays for Czech side Slavia Prague made his debut for the national team at the end of March against Estonia in a World Cup qualifier. Zima plays in central defence and has appeared on ten occasions for his club in the Europa League this season, picking up four yellow cards.

There’s no denying that the Czech Republic are big outsiders for Euro 2021 and can be backed at the three figure price of 100/1 with most bookmakers.

England will be one of the opponents for the Czech Republic in Euro 2021 along with both Scotland and Croatia in Group D. They can be backed at 12/1 to top the group, while Even money (1/1)  is the best price on offer for them to qualify for the round of 16.

Jaroslav Silhavy played for Slavia Prague in the early nineties and went on to become manager and win the top flight title in 2017. The year after he became manager of the national side and has since then played 25 matches, winning on 14 occasions.