Could Robert Lewandowkski be the value pick at 9/1 in the Champions League top scorer market
By Anthony Eadson
17:04 Wednesday 25th November 2020 - 6 minute read

After netting a brace on Tuesday evening Borussia Dortmund’s Erling Haaland is now the clear favourite in the Champions League Top Goalscorer market priced at 11/4 with most firms. The 20-year-old became the youngest player in the competition to score 15 goals, breaking the record previously set by Kylian Mbappe.

@AnthonyEadson has taken a look at some of the previous winners and looks at where the value could potentially lie for this season’s renewal. Here’s the latest market below, with four places each-way being offered from most bookmakers.

It’s been some start for Erling Haaland this season, besides bagging ten goals in his first games in the Bundesliga, the 20-year-old has scored an impressive six goals in just four games in the Champions League. That’s the most of any player so far and from his four games Haaland has a combined xG (expected goals) figure of 3.76. With six goals to his name it shows Haaland is taking his chances well and is over-performing in this area.

When it comes to shots on target the Norwegian striker has registered 11. With an average of just under three shots on target per game he could well be one to keep onside in the shots markets in future games to come in this tournament.

For a young man of his age, Haaland oozes class, although at 11/4 he is a little short for my liking in this market. My main concern would be how deep into the tournament Borussia Dortmund can go. There are eight teams ahead of Lucien Favre’s side in the betting, and were they to come up against one of those in the round of 16 I would fear for them. Lazio are only one point behind Dortmund in Group F and with the two facing off in Matchday 5, it could be possible that the Germans finish second in this group and face a tougher level of opponent in the first knockout round.

As a Blackburn fan I’m fed up of hearing how if it wasn’t for a volcano erupting Robert Lewandowski would’ve donned those beautiful blue and white halves. The Polish striker has become one of the most formidable forces in world football in front of goal over recent years and scooped last season’s top-scorer award with a staggering 15 goals.

After Haaland’s performance on Tuesday, Lewandowski has drifted to 9/1 in the market which in my eyes could be a bit of each-way filth, and here’s why. I’m expecting Bayern Munich to go right to the end of this competition and repeat their success of last season. The Germans are 11/4 to do so and in my opinion are by far the most well oiled machine in Europe. Despite only having two goals to his name, Lewandoski should have plenty of knockout games to rack up the numbers. One other key angle here is that Bayern play Salzburg in Germany on Wednesday evening which could see big Robert find the net on several occasions and his price shorten considerably. 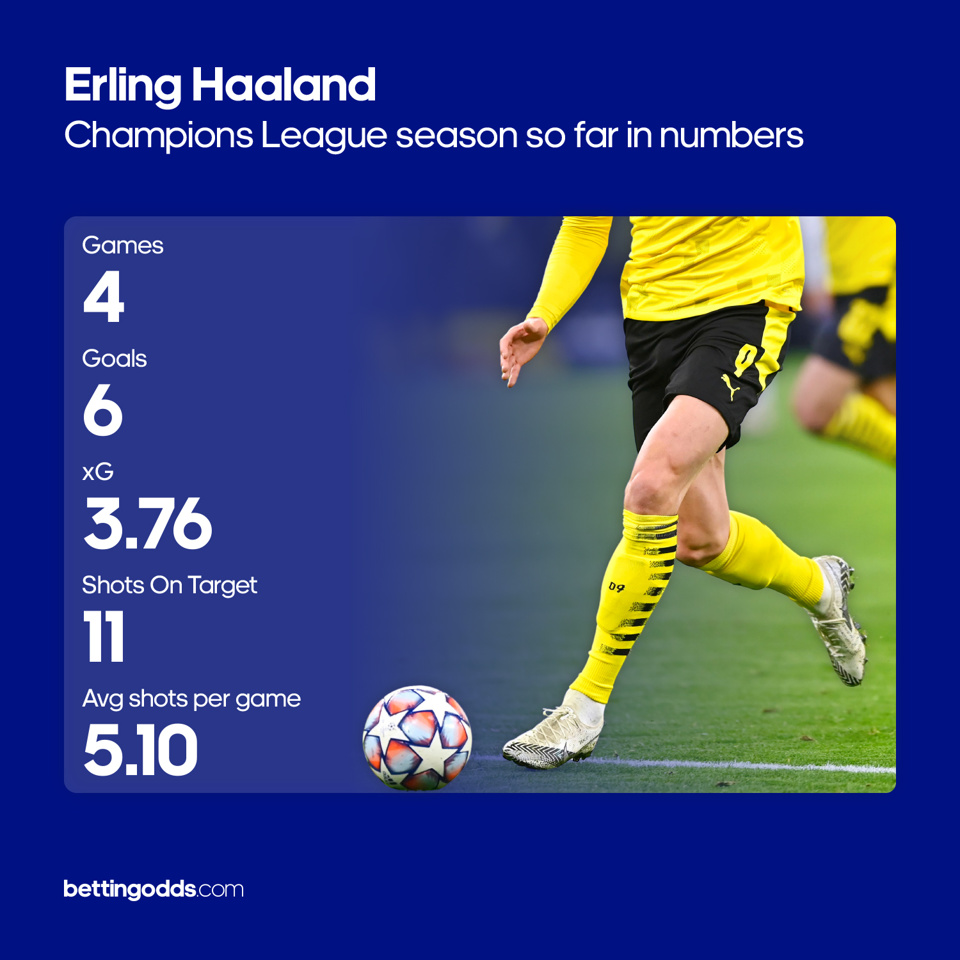 In many people’s eyes the greatest footballer that has ever graced this planet, Lionel Messi will forever be seen as a God-like figure to some; The Argentine has won this award six times in the past and despite being rested for Barcelona’s latest Champions League game Messi has still bagged three goals in three appearances in this competition. There are still question marks over Ronald Koeman’s appointment with the Spaniards sitting 13th in the La Liga table and I do think Barcelona are much weaker than they have been over the previous decade, nevertheless they can still go deep into this competition.

Lionel Messi has scored an eye-watering 118 goals in the Champions League and this season he has the highest xG per game figure of anyone with three or more goals with 1.06 per game. Messi tops the charts in this season’s competition when it comes to shots on target, notching 3.02 per 90 mins. We all know the talents of Messi and with four places available each-way on this market I don’t think he should be overlooked. With a three-point lead in Group G and a superior goal difference over Juventus I think Barca will top the group which could be key in helping them progress into the latter stages of this competition, avoiding sides such as Bayern Munich, Liverpool and Manchester City, who all should top their groups.

Diogo Jota’s seamless transition to life at Liverpool has caught the eye over the first term of this new and unprecedented season. Since arriving from Wolves Jota has scored eight goals in just six starts for Jurgen Klopp’s side and he seems to be thriving with the quality of player that now surrounds him. Jota’s performances are leaving his manager no option but to play him from the start of games, which many thought would not be an option after the unbreakable bond of Salah Firmino and Mane had been so tight over the last two seasons.

After his hat-trick in Italy against Atalanta, Jota has now scored four goals from just two starts in the Champions League. The Portugese attacker has a combined xG figure of just 1.94 which shows how potent he has been, with four goals scored from his eight shots he has taken. I see the 23-year-old progressing as the season moves on and with Liverpool’s record under Klopp in this competition I think they will go far this season. Even without Virgil Van Dijk, Liverpool’s winning mentality and pacy forward play still makes them the ones to beat in the Premier League and after reaching the final in two of the last three seasons there should be plenty of opportunity for Jota to add to his haul.

At 20/1 he is very much an each-way shot with four places available from most bookmakers. With four goals to his name already and the chance to add to that against Atalanta on Wednesday evening, Jota well could be a shorter price come the end of the week.

With 9/1 available each-way and a home game against Salzburg on Wednesday it’s hard to keep away from Lewandowski in this market and I’d be giving the Bayern front-man and Liverpool’s Diogo Jota some consideration at those prices.

Who's the best No9 in UCL history?