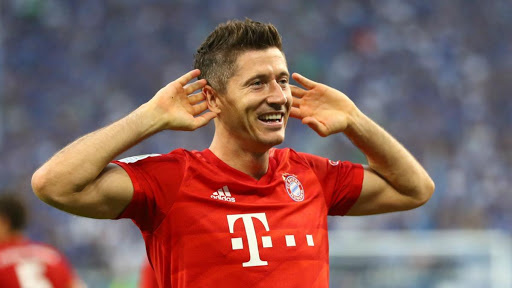 Bayern's odds to win the Bundesliga have shortened following their 5-2 win over Frankfurt
By Callum Pragnell
12:51 Monday 25th May 2020 - 5 minute read

There were plenty of talking points from this weekend's round of Bundesliga fixtures, notably RB Leipzig seemingly returning to their best following a 5-0 thrashing of Mainz, alongside routine victories from the current top-two - Bayern Munich and Borussia Dortmund - who won their respective contests against Eintracht Frankfurt and Wolfsburg with relative conviction on Saturday afternoon.

Bayern's grip on the title has subsequently tightened after their 5-2 win over Frankfurt, and the Bavarians are now being given a 88.9% chance of winning the Bundesliga by the bookies. Indeed, with Dortmund yet again impressing - could now be the time to get some value ahead of tomorrow's Klassiker?

Considering their scintillating recent form, it is unsurprising to see that it's the visitors who enter the clash as favourites (5/6), but the value could lie in a Dortmund side who have won their previous six home games in convincing style.

The bookies have BVB priced up at 11/4, giving them a 26.7% chance of victory at Signal Iduna Park, but with 21 goals scored and just two conceded on home soil since January, it could perhaps prove foolish to underestimate Lucien Favre's men in this one.

In other news this weekend, the division's leading marksman Robert Lewandowski added to his remarkable goal haul at the Allianz Arena, taking his season's tally to 27 in the Bundesliga.

However, after experiencing a three-game scoring drought prior to this weekend, Leipzig's Timo Werner bagged his second hat-trick in as many games against a deflated Mainz outfit away from home, to see the gap shorten between himself and Lewandowski to just three goals at the top of the league's goalscoring chart.

After this weekend's performance, Liverpool fans will be licking their lips at the thought of their club signing the 24-year-old; he's currently being given a 69.2% chance of joining the Reds in the summer by the bookies.

The Germany international has also seen his odds to win the Golden Boot award halved following his exploits on Sunday afternoon, now priced at 4/1 from 8/1. His Polish counterpart is still firm favourite to win the award, however, priced at 1/10 with most bookmakers. 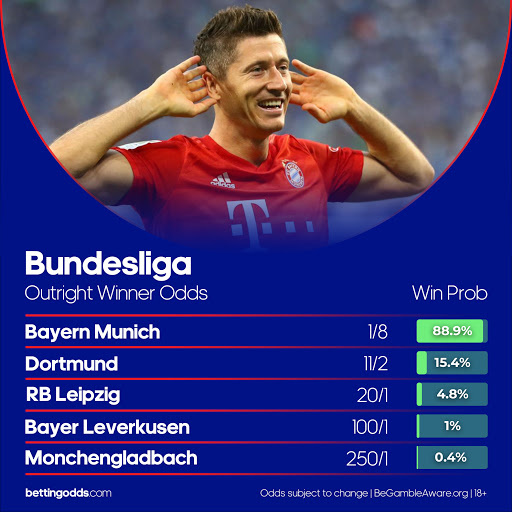 Elsewhere, Borussia Monchengladbach's dreams of winning the title look over, after they go from 50/1 to 250/1 following a 3-1 defeat against Bayer Leverkusen.

Kai Havertz was once again instrumental in his side's victory at Borussia-Park, scoring a goal in each half and also hitting the crossbar during what was an exhilerating 90 minutes worth of action.

The 20-year-old would have only added more value to his already-gargantuan pricetag following his performance over the weekend, with perspective clubs certainly now even more interested in obtaining his services when the transfer market opens next month.

Bayern Munich remain favourites to sign the German this summer, priced at 4/6, while Manchester City's odds to land the young playmaker have drifted ever so slightly to 16/1 from 14/1.

Battle at the bottom

At the foot of the division, there were vital points obtained by both Paderborn and Werder Bremen. Paderborn managed to pick up a point at home to Hoffenheim - their second consecutive draw following the 0-0 stalemate against Dusseldorf last weekend - while Werder returned to winning ways following their heavy 4-0 defeat to Bayer Leverkusen last Monday, beating Freiburg 1-0 away from home.

The gap between Paderborn and Werder at the bottom of the Bundesliga is now only three points, though the latter do have the luxury of a game in hand to help them escape their unforgiving current league position.

That game will come tomorrow evening against a Borussia Monchengladbach side who were well beaten on Saturday, so there could be some real value in backing the 3/1-priced hosts considering they will enter the clash brimming with confidence after their recent victory.

Frankfurt are another club who find themselves in real trouble following two heavy defeats. Adolf Hutter's side are now 25/1 shots for the drop, having seen their odds cut from 40/1 after their thrashing by Bayern.

Leonardo Bittencourt with a massive goal for Werder Bremen!

Interestingly, after seeing one of the highest booking totals in last week's (second) Bundesliga curtain-raiser, this weekend saw the second-lowest amount of yellow cards distributed - 25 down from 39.

Whether or not it was due to players taking a more conservative approach following the amount of cards shown last weekend, or they are simply now returning to match fitness and therefore timing their challenges better, it is somewhat peculiar to see such a decrease in such a short space of time.

The side who picked up the most yellow cards this weekend was Wolfsburg with four - no other side received that many, with only RB Leipzig, Paderborn and Mainz acquiring three each. There were even five sides who didn't pick up one yellow card at all (Hoffenheim, Bayern, Schalke, Freiburg & Koln).

Last weekend, we saw just one team elude a booking entirely (RB Leipzig), showing just how different the two gameweeks were in terms of yellow cards. Indeed, matchweek 26 saw no red cards brandished at all, while matchweek 27 this weekend saw a total of two (Wolfsburg & Werder Bremen).

With this in mind, it might be worth really considering who you're backing to get booked this week. If this weekend's trend continues, there could be fewer yellows brandished, which makes doing your research absolutely pivotal.

Rest assured, we'll be on hand to help you out with this with our match previews and predictions for the upcoming games.

All in all, it was another enjoyable weekend's worth of action, with focus now switching to matchweek 28 this Tuesday and Wednesday.

Dortmund v Bayern is undoubtedly the pick of the games on Tuesday, and if you're looking for some tips for the clash, make sure you check out our comprehensive match preview right here.