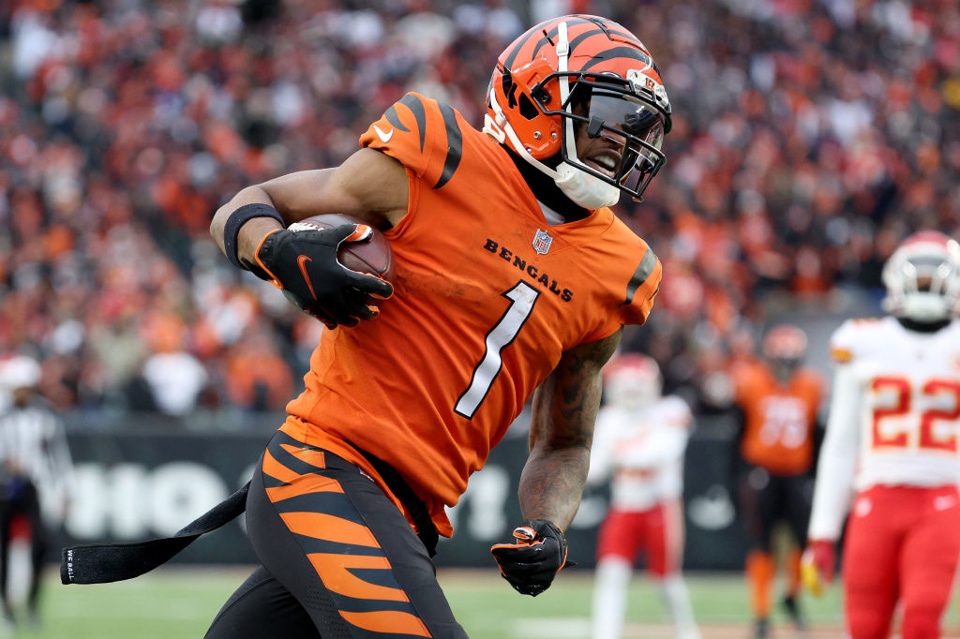 Ja'Marr Chase had a game for the ages when these two team met four weeks ago
By Neil Monnery
11:20 Friday 28th January 2022 - 4 minute read

There is no way the NFL can conjure up the drama of a week ago but Neil Monnery does think the Bengals and Chiefs could be a joy for Prop Bet fans on Sunday evening...

Are you still on a high from Divisional Weekend? I know I am. Last week we saw four quite astonishing games from the NFL. Both teams in this AFC Championship Game won late as Evan McPherson kicked a game-winning FG as time expired in Tennessee to send Cincinnati through and as for Kansas City, well the way they survived a heroic effort from Josh Allen and Gabriel Davis will be something fans will talk about for years to come.

When it comes to the action on Sunday though, the bookies don’t see this game providing half as much drama. KC are 7.5pt favourites at home to end the Bengals’ run.

If you are looking for hope that the shock is on, then Bengals’ QB Joe Burrow is key. The 25 year-old was sacked a playoff-record nine times on Saturday but still managed to stay upright enough to lead his team to victory. He was ably assisted by first-year Wide Receiver Ja’Marr Chase who caught five passes for 109 yards. He’s gone over 100 yards in both playoff games so far. I expect another big night for the former LSU Tiger.

They also have a kicker who has proverbial ice in his veins. Rookie Evan McPherson is money and if you take out Justin Tucker, he is probably the person you’d want to kick a FG in key moments.

The biggest issue facing Cincinnati is they are playing a darned good team. This is the fourth year in a row that the AFC Championship Game will be played in Kansas City. Patrick Mahomes is just crazy good. If Tyreek Hill gets a step on a defender then he’s gone and Travis Kelce is as reliable as they come.

What concerns me a little bit is their defense is starting to look like its old self and that isn’t good news for the home side. Josh Allen was outstanding last week but the way Bills’ receivers were being allowed to run free all night would frighten the living bejesus out of me if I were a KC fan.

This should be a run fest but I am going with the defending AFC Champs to make it three straight. I know Cincinnati beat KC just four weeks ago but Joe Burrow was phenomenal that day. I just think with this game being in front of their own fans coupled with the experience of big games, the Chiefs roll.

Therefore I’m just looking at a deep and interesting prop bet market for some tips and as I think offense will be on top - I can see several prices that tempt me but I’ll stick with just two.

We’ll start with a Paddy Power Price Boost as Tyreek Hill & Ja'Marr Chase to have 70+ receiving yards each & to score 1+ TDs each has been priced up at 6/1. I see both top receivers being key to the game plan and remember Chase had 11 receptions for 266 yards when the two teams met earlier this month. Hill had 11 catches for 150 yards last week. I think 6/1 is significantly longer than I would have expected.