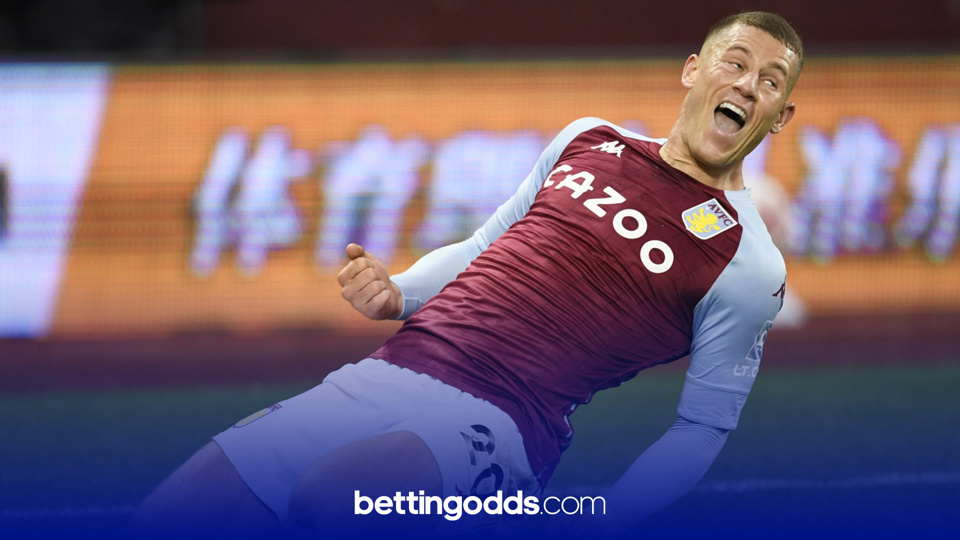 Four of Ross Barkley's six shots on target for Villa have come from outside the box and we fancy another as part of our football tips this weekend
By Anthony Eadson
17:01 Friday 22nd January 2021 - 5 minute read

Aston Villa face Newcastle in the only Premier League fixture this weekend due to the FA Cup fourth round ties. Dean Smith’s side have as many as three games in hand on some of the sides above them in the table and will be looking to move back into the top half after a positive performance at the Etihad on Wednesday, despite the 2-0 defeat. We’ve got three football tips for the game including a 50/1 longshot from our man @AnthonyEadson.

John McGinn picked up a yellow card against City which means he will miss this game through suspension. Matt Targett is a doubt for the game while Jacob Ramsey or Marvelous Nakamba could slot into the midfield to replace McGinn.

Newcastle were beaten 3-0 by Arsenal on Monday evening and Steve Bruce’s side have now just scored one goal in their last seven games in all competitions. Allan Saint-Maximin is back training for the Magpies but is unlikely to start, while Ryan Fraser is available once again after serving a suspension.

Having a look at the prices on the match result and the home side are the odds-on favourites to take the three points priced at ½, an implied probability of 67%. The draw can be backed at 18/5 with a much needed win for Newcastle priced at 11/2.

Ross Barkley 1+ shot on target from outside the box - 2pts @ 7/4 Betfair, Paddy Power

Ross Barkley made his first appearance since November when starting against Manchester City on Wednesday evening and put in a solid performance. I’ve been impressed with the Chelsea loanee when I’ve seen him this season and he’s actually averaging more shots per game than any other player in the Aston Villa squad this season.

Against Newcastle on Saturday evening I’m backing Barkley to have one shot on target from outside the box, which is available at 7/4 from both Betfair and Paddy Power. Shooting from range has been a common feature of Barkley’s game for most of his career and this bet has landed in four of the six games where he has played over 60 mins for Villa this season. With six shots on target in total for the West Midlands side this term, four of which have been from outside the box, I’m fancying Villa to make an assault on the Newcastle goal this weekend with plenty of shots from range flying in.

The Villans also rank 1st in the league this season for shots per game at home, with an impressive 18.4 on average, showing the clear attacking intent Smith has instilled into his side. I’m having a small play on the hosts to have 10 or more shots on target against Newcastle which is priced at 12/1 with both Betfair and Paddy Power.

This same selection is just 5/1 with Sky Bet and with Newcastle’s recent failings in front of goal, it’s hard to see them posing too much of a threat to Villa. With players such as Ollie Watkins, who racked up 10 shots alone in his last home game, and Anwar El Ghazi who is currently averaging the most shots on target per game of any player in the league, Villa have the ability to rack up serious numbers in front of goal and it would be no surprise to see them bombard Newcastle with attempts on Saturday.

Miguel Almiron was booked five times in the Premier League last term and I’m fancying the Paraguayan to pick up his second this season at Villa Park. I’m very much under the thinking that the home side will dominate this game which should lead to plenty of defensive work for Miguel Almiron, tracking back on the right wing.

With Jack Grealish playing on the left of a front-three for Villa, this will be one of the key areas on the pitch and with Matt Targett overlapping Almiron will have to be on his toes to help cover the pair. Jack Grealish is by far the most fouled player in the Premier League this season and describing him as a tricky customer would be an understatement. The England star has drawn 25 more fouls than any other player in the league and even with traditionally card-shy referee Simon Hooper in charge, I’m willing to have a small play on Almiron to be carded at 11/2.

I’ve doubled up an Almiron booking with Aston Villa’s Matt Targett to also pick up a card. I think it should be a good battle between Almiron and Targett on that side of the pitch and the left-back actually has four cautions to his name in the Premier League already this term. With Allan Saint-Maximin also set to come off the bench in the latter half of the game I feel Targett could be tested with and can hopefully pick up his fifth booking of the season to give us a 50/1 winner.

Enjoy the game, which can be seen live on Sky Sports Main Event at 8pm. Best of luck to those following and please always gamble responsibly.