Wycombe vs. MK Dons Predictions: Honours even at Adams Park 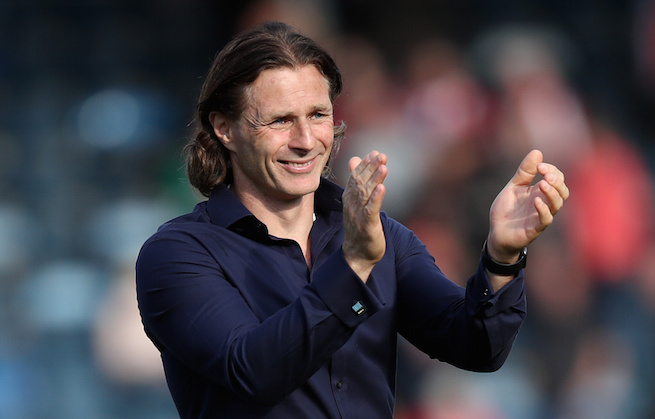 Wycombe vs. MK Dons: Gareth Ainsworth is one of the favourites for the Blackburn job but he has more pressing matters on the agenda this week.
By Adam Roberts
11:42 Wednesday 4th May 2022 - 4 minute read

League One reached its climax a week early this season thanks to the rearranged Queen's Platinum Jubilee celebrations and Wigan and Rotherham clinched automatic promotion to the Championship. Now we enter the magnificent spectacle of the play-offs and find out which of the four teams involved will join them in the second tier next season. Two legs and a potential Wembley Stadium final on the 21st May await. Here we have asked our lower league legend @OddsT3rrier to preview the Buckinghamshire Derby clash between Wycombe Wanderers and Milton Keynes Dons and pick out his best two bets.

Both these sides will enter the play-offs brimful of confidence; Wycombe are on the back of a 12 game unbeaten end to the season and have won five of their last six games at their Adams Park home. The Chairboys only clinched the coveted sixth spot on the final day, thanks in part to their play-off opponents demolition of Plymouth and will see this as a bit of a free hit. Manager Gareth Ainsworth is the current co-favourite in the Blackburn Rovers new manager market but has bigger fish to fry over the next few weeks. Getting Wanderers into the Championship would certainly enhance his managerial stock.

MK Dons have only lost two games since the end of January, both to teams in and around the playoffs, and only just missed out on automatic promotion to Rotherham by one point. Liam Manning has done a superb job in Buckinghamshire and in Scott Twine they possess one of the more feared marksmen in the 3rd tier. More on him later...

Manning is likely without Mo Eisa having missed the last three games but otherwise will probably play an unchanged side.

Wycombe should also name the same starting XI as at Burton but may have Chris Forino-Joseph back from injury.

My first selection is from the match result market and I'm going to stick my neck on the line and go for the draw. Both sides have legitimate claims to win this one, but with so much on the line, play-off first legs often end up as cagey affairs. No team wants to be two goals down entering a second leg and therefore, subconsciously or not, will sit back and play a little more defensively. The Dons have won both head-to-heads this season but Wycombe are on a high right now and in front of their home fans. I'm expecting them to at least get a draw out of this one.

My next selection is based around the two main goal threats in this tie. Wycombe's veteran striker Sam Vokes and MK Dons young starlet Scott Twine. I've taken them both to have 2+ shots on target over the 90 minutes.

32-year-old Welshman Vokes has had a storied career, playing at Bournemouth and Wolves before his starring role for Burnley. He is in the twilight of his career but still possesses a big threat at this level, scoring 16 goals in the League one campaign this season. Vokes has a colossal 134 shots and 54 on target this term and has passed the 2+ SoT line often recently, recording at least two shots on target in six of Wycombe's last eight games.

Twine is one of the hottest prospects in League One and has recently been linked to Nottingham Forest. The 22-year-old started his career at Swindon Town before a move in the summer to Milton Keynes for a rumoured £300k at tribunal. He primarily plays in the number ten role but can play as a left winger or a striker. He likes to shoot from range and is also on direct free kicks. In his last game versus Plymouth he scored four of the Dons five goals, two from outside the area and two other brilliant finishes. He has nine shots on target from his last four games and has cleared this line on 17 occasions this season.

The two combined pays 6/1 at William Hill and I've taken it for a small stake as my long shot.

Enjoy the game and remember to gamble responsibly.