Who ranked highest for fouls and shots on target at Euro 2021? 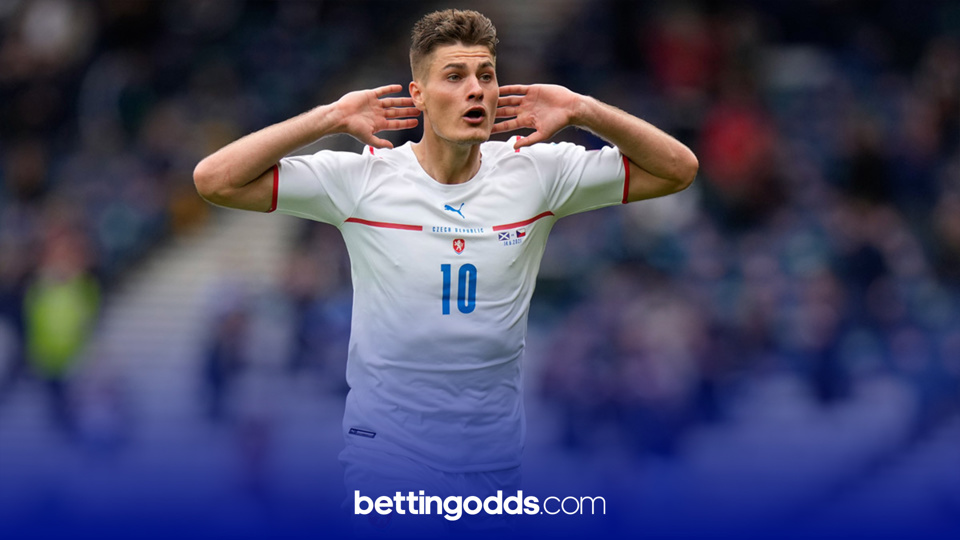 Now that Euro 2021 is wrapped up, BettingOdds.com takes a look at the highest-ranked players for fouls and shots on target during this summer’s tournament.

Top 5 players for Shots on Target

Shots on target is one of the most popular markets to bet on these days, with most of us including a certain player to register either 1+ or 2+ in our Euros Bet Builders this summer. Interestingly, the joint-leading man in this department - Spain’s Alvaro Morata - actually only managed to find the net three times and missed his country’s decisive spot-kick to see them bow out of the tournament to eventual winners Italy in the semi-finals.

Morata registered 9 shots on target at Euro 2021, converting a third of those shots into goals. He is not alone at the top of the standings, however, with Czech Republic front man Patrik Schick also registering 9 SoT throughout the tournament. The 25-year-old matched Morata’s total in just five games as opposed to six, though, with his country’s journey at the competition ending in the quarter-finals against Denmark.

Schick scored 5 goals at Euro 2021 and was unfortunate to miss out on the Golden Boot award, which in the end went to Portugal’s Cristiano Ronaldo due to him providing an assist - although several bookmakers still paid out on anyone who had backed Schick, with a reduced payout.

England duo Harry Kane and Raheem Sterling both notched 8 shots on target, with Kane converting half of those into goals and Sterling scoring three. Ronaldo (4 apps), Dani Olmo (5 apps), Joakim Maehle (6 apps), Lorenzo Insigne (6 apps) and Romelu Lukaku (5 apps) each registered 7 shots on target, which makes CR7’s Golden Boot triumph all the more impressive considering he only played 4 games as Portugal were knocked out in the last-16.

Italy’s Federico Chiesa lit up the tournament and was one of the main reasons the Azzurri won the Euros; the Juventus winger registered 6 shots on target overall, the same amount as Roman Yarmemchuk, while his Ukraine teammate Andriy Yarmolenko creeps into the top 5 having registered 5 shots on target alongside six other players. 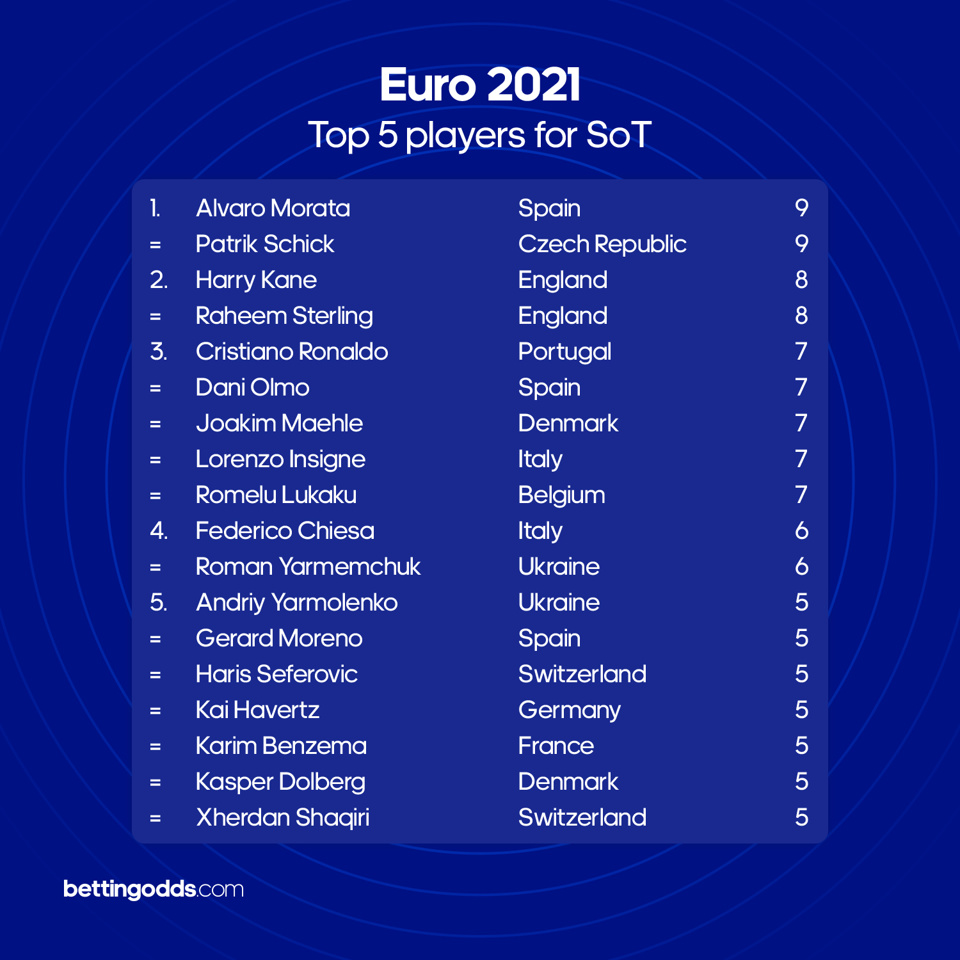 As for fouls, Denmark’s tough-tackling midfield general Thomas Delaney topped the pile with 14 in 6 outings - an average of 2.3 per game! Somewhat remarkably, though, he only picked up one yellow card. Tactical.

Italy full-back Giovanni Di Lorenzo committed two less than Delaney with 12 fouls overall (6 apps) which sees him rank second in this department, while England’s Kalvin Phillips secured third-place with 12 fouls in his seven appearances at his first ever international tournament.

Jorginho was lucky not to be sent off for a rash challenge on Jack Grealish in Sunday’s final but was superb for Italy throughout the entire tournament. The tenacious Chelsea midfielder was consistently breaking up play for the Azzurri to prevent opponents from getting the run of his team in the middle of the park.

We have seen with his performances in the Premier League that he is never afraid of getting stuck in, and this was the case at the Euros as he committed 11 fouls - resulting in just 1 booking - in 7 appearances for the now-European champions. He shares fourth-place in the top 5 with Austria and RB Leipzig’s Konrad Laimer and Belgium’s Thorgan Hazard - who both committed 11 fouls in just four appearances for their respective countries this summer.

Slovakia’s Juraj Kucka finished the tournament with the highest fouls-per-game average, with his total of 10 fouls in three appearances amounting to 3.3 p/g. Luke Shaw is the second Englishman in the top 5, also with 10 fouls committed overall, but those did come in 6 appearances as he played an influential role in the Three Lions making it to their first major final in 55 years. 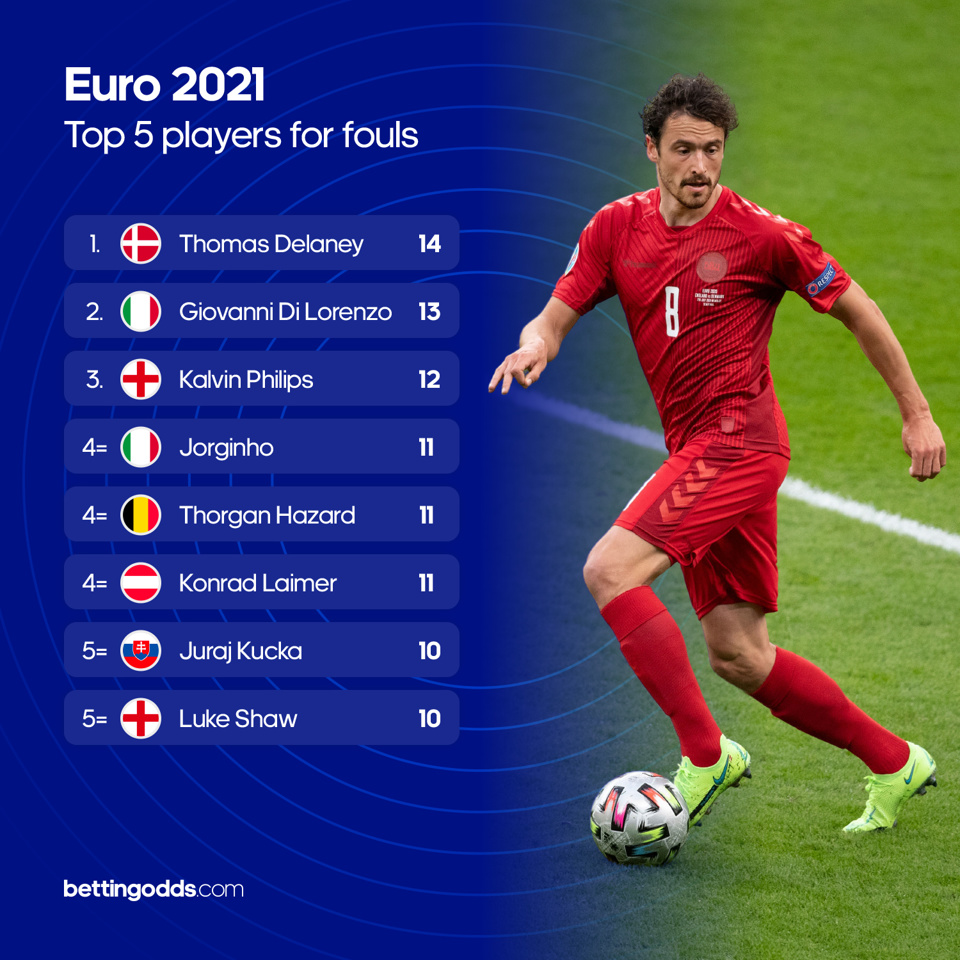