Tottenham v Manchester United Betting: Back the top two for shots on target 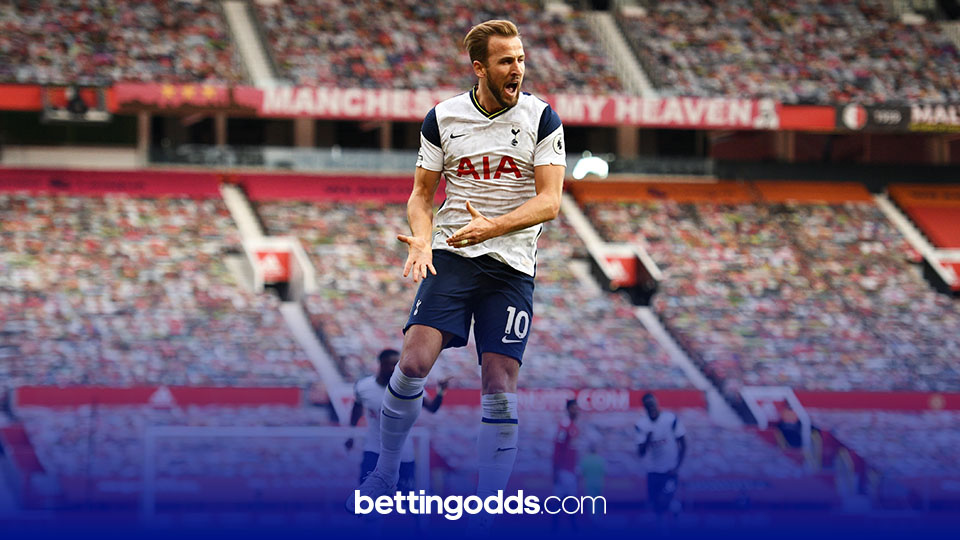 Harry Kane ranks first in the Premier League this season for assists, shots on target and goals. The Spurs talisman features in our boosted 10/1 bet for the game
By Anthony Eadson
16:51 Friday 9th April 2021 - 4 minute read

The last time Manchester United we’re beaten away from home in the Premier League was all the way back in January 2020 against Liverpool and we’ve taken a dive into the stats ahead of their match with Spurs this weekend.

It’s a 4:30pm kick-off in what looks the pick of the games on Sunday and in Harry Kane and Bruno Fernandes, we have two of the top performers in Europe this season. Both players are in contention for the Player of the Year and Golden Boot awards and based on the stats below we’ve picked out a double for the game. Those good folk over at Paddy Power have once again given us a boost which takes the selection from 8/1, up to the generous looking 10/1.

Top Two for Shots on Target

First up let’s take a look at Harry Kane. We’ve all seen the clip from the Amazon documentary where Jose Mourinho tells his star striker that he can help him ‘explode’. Well that statement couldn’t have been more true with the England Captain leading the way for the most goals and assists in the league this season. 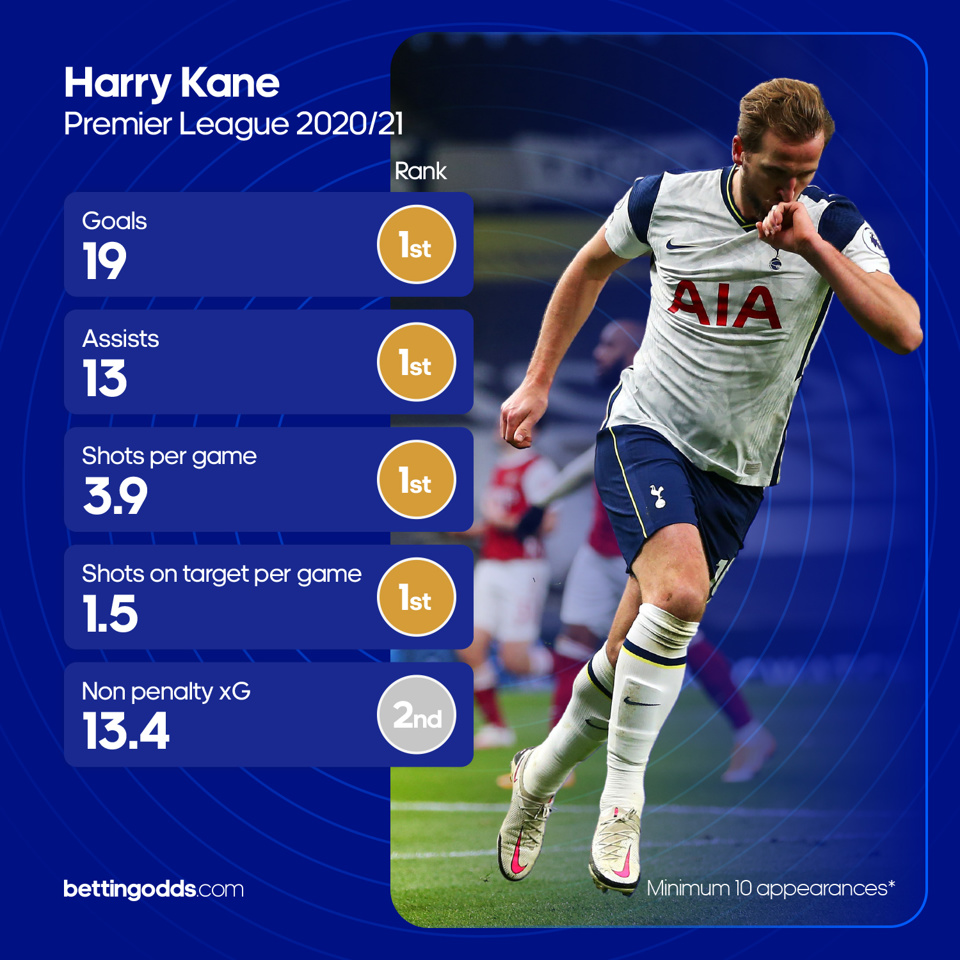 We’ve based the rankings above on all the Premier League players to have made at least 10 appearances this campaign. Kane’s phenomenal output has resulted in the 28-year-old being the current favourite for the top goal scorer award. He’s priced at 8/11 with bet365 to claim that crown with Mohamed Salah (7/4) one goal behind and Bruno Fernandes (8/1) three goals adrift.

Bruno Fernandes continues to raise the bar at Manchester United and his impact has been pivotal to the significant progress that has been made over the last 18 months at the club. For a player who is not a striker, Bruno’s attacking output, in particular his shooting has been exceptional and he ranks second only to King Kane when it comes to shots on target. 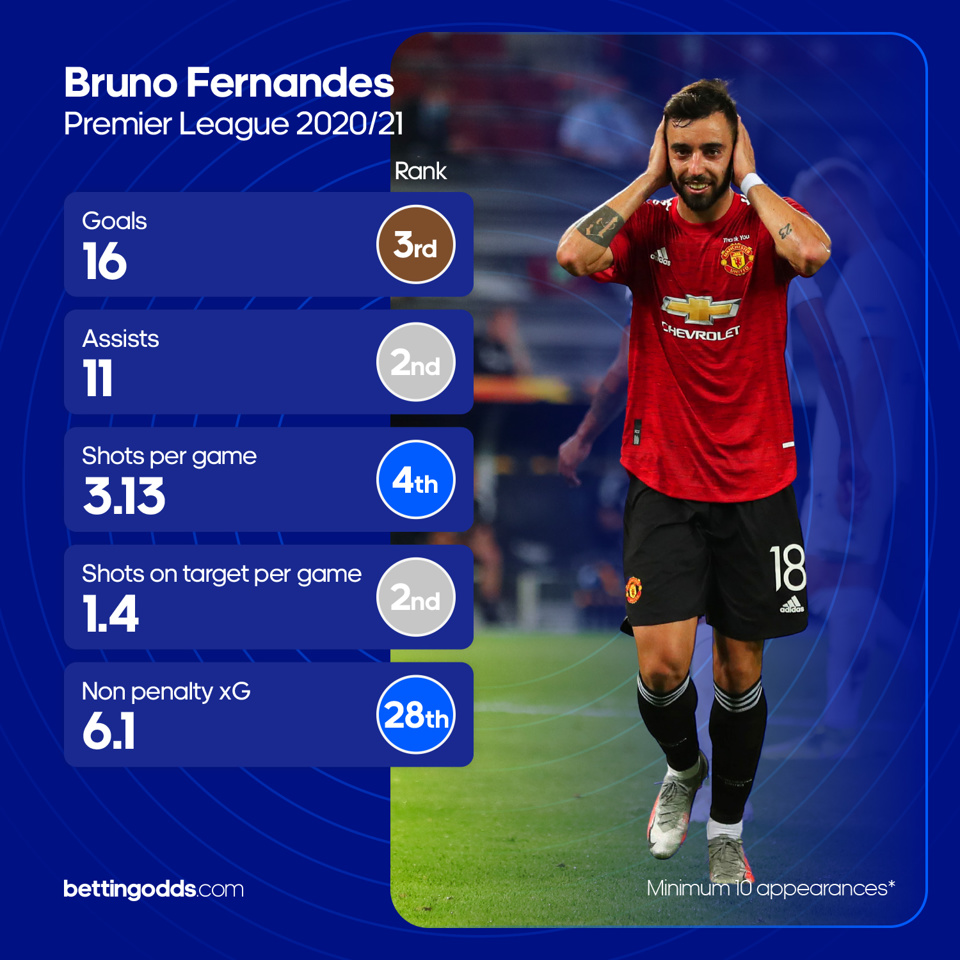 At the time of writing, Manchester United’s biggest threat is the current 10/11 favourite to be crowned the PFA Player of the year on what is his first full season in England. Ruben Dias (3/1) and Harry Kane (4/1) are the next two in the market, although we could well see a swing in those prices dependent upon Sunday’s performances.

This one could also have a bit of added spice when you cast your minds back to October and the result between the two at Old Trafford. Tottenham put six past United that day in an emphatic 6-1 victory, with the correct score priced at a mammoth 250/1. It’s been hard to imagine this Spurs side scoring six goals at points this season with the way they have invited teams to attack them, however United will certainly be seeking revenge.

Both Harry Kane and Bruno Fernandes were on the scoresheet that day, with Fernandes converting from the spot on both his meetings with Spurs since arriving in Manchester.

Having taken into consideration both players stats over the course of the season the stand out here is that we have the first and second rated players in the division for shots on target per game.

The duo have produced impressive numbers throughout the campaign and both registered 3+ shots on target on their most recent league outing. The pair will also both be on free-kick duty for their clubs and have converted 12 penalties between.

With 35 league goals between them and 84 shots on target we think there’s plenty of appeal to the enhanced price of 10/1 for both players to have two or more shots on target. Coral have this same bet at just 9/2 so we’d certainly be recommending using Paddy Power at 10’s here. Good luck if following this weekend and enjoy the game. Please always gamble responsibly.