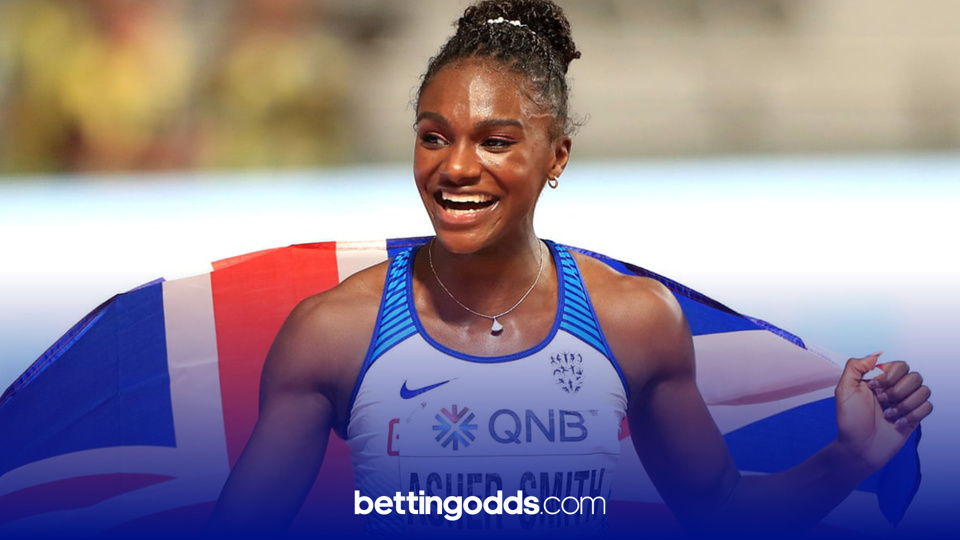 The Tokyo Olympics will finally get underway this week and although Great Britain aren’t expected to win it, they’re still bringing some of the world's top athletes to compete on the biggest stage of them all. From cycling to the 100m, we’re going to take a look at Britain’s best chances for a Gold Medal at the Olympic games and odds to go with them.

Dina Asher-Smith is a household name these days in Great Britain and the bookmakers have installed her as the third-favourite for both the 100m and 200m sprints at the Olympics. The 25-year-old boasts the accolade of the ‘Fastest British Woman in History’ and has been putting up great results as of late. In 2019 she won the Silver medal in the 100m at the World Championships and also managed to win Gold in the 200m at the same tournament. Considering all of this makes the 4/1 and 3/1 prices for both races look incredibly attractive, however her main opponent will be 100m veteran Shelly-Ann Fraser-Pryce, who is one of the most decorated in her field.

Dina Asher-Smith’s 2019 triumph at the World Championships did see her beat Shelly-Ann but many people have argued that this was solely due to the non-ideal conditions at the tournament. However, condition dependent or not, you simply can’t ignore the fact that the Brit did beat her out in the 100m sprint. The Jamaican has been backed into odds-on favourite for the event whereas Dina Asher-Smith is a general 9/2 shot to win the race. If you fancy Great Britain to make a charge on the athletics field, Dina could be the woman to do so!

On a side note, Dina Asher-Smith is currently priced at 5/1 for the Sports Personality of the Year award which puts her as the joint-favourite alongside Mark Cavendish. The trends suggest that an Olympian wins the award whenever the Olympics is in that year and some Team GB heroics could certainly cement their claim to the award this year.

Two players will be turning out for Great Britain in the men's golf tournament at the Olympics, Paul Casey and Tommy Fleetwood are the ones with the privilege of representing their nation in Tokyo. The odds suggest there isn’t much between the two, with Casey representing the shorter odds of 22/1 and Fleetwood being priced at 28/1 to win Gold. However, I believe there’s only one man to pick here and that’s Casey.

The 43-year-old has been fairly consistent on the tour so far in 2021 recording six top 10 finishes in his last 12 tournaments. His best results so far in 2021 are as follows: T4 in the PGA Championship; T5 at the Players’ Championship, and T5 at the Pebble Beach Pro-Am. With his consistency on the tour this season (and also a fairly impressive 2020) I think Casey will be right in the mix.

The last golf tournament was The Open where the 43-year old was the highest finishing Englishman and the second highest finishing Brit just after Robert MacIntyre who snagged 8th place. Unfortunately, two average days cost Casey a higher place after he shot a 68 and 67 on day’s one and two but only recorded a 70 on the final two days which left him with a score of -4. With Casey being priced at 22/1 an each-way shout could pay well since we’d only need a top six finish for a payout, something that he has recorded three times on the tour this season.

I’ve saved the best until last with Adam Peaty as he simply dominates this event. In 2014 Adam Peaty burst onto the scene where he broke the world record for the 100m Breaststroke and then broke it again in 2016. It should come as no surprise to see the Brit priced at 1/18 to win this event which doesn’t sound too attractive, but it shows how likely he is to be victorious. To put this into a percentage perspective, the bookies are giving him a 94.7% chance of claiming Gold which is pretty resounding.

The only thing that could beat Peaty at this event is the world record clock but the athlete has come out and said he is confident in breaking his own record at Tokyo. To quote him, he said: “I know that I grow 10%, if not more, at an Olympic Games.” There’s honestly not much else to analyse when Adam has been this dominant in the sport, this should be a near guaranteed Gold medal for Great Britain.