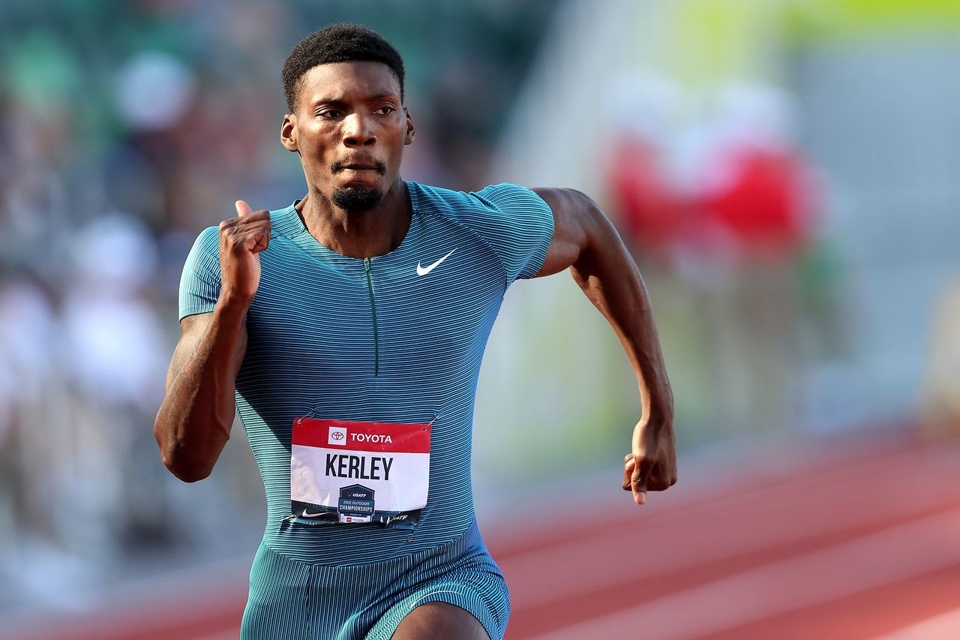 Athletics World Championships: Fred Kerley only moved from the 400m last year but is favourite for the 100m gold after a stellar year
By Adam Roberts
15:02 Wednesday 13th July 2022 - 5 minute read

The 2022 World Athletics Championships take place in Eugene, Oregon from the 15th-24th July. The event was due to take place in 2021 but had been pushed back due to the postponement of the Tokyo2020 Olympics due to the COVID-19 pandemic. We've taken a look at the blue-chip event of the Championships - the 100m sprint and given you a full preview of the runners and riders.

We also covered the Women's 100m which you can read below...

This is the 18th running of the World Athletics Championships, the first being way back in 1983 at Helsinki. The 100m has been long known as the showpiece event and has some titanic battles over the years. Sprint giants USA and Jamaica have dominated this distance historically and the most successful champions have been Usain Bolt, Maurice Green and Carl Lewis, all of whom have won three World Titles.

Here are the full results over the last 17 championships:

So who are the main contenders this time?

The 27-year-old Texan grew up racing in the longer distance 400m format and has only recently just dropped down to the 100m within the last 18 months. Kerley won individual bronze and a relay silver in the 400m at the 2019 Championships and many were shocked when he moved to the shorter distance. However, that change has been justified with a series of superb sub-10 second runs including a 9.84 time when winning silver at the Tokyo Olympics. He then bettered that with a 9.76s personal best when winning the US Championships back in June.

Kerley is a odds-on favourite and it would be a big shock if he doesn't win here.

The fastest man in the world, Fred Kerley, just ran 9.76 in the mens 100m. That is a world leading time and the 5th fastest time in American history. 🔥🔥 pic.twitter.com/dZBXP4cx3l

The 2015 Bronze medalist, Bromell is 27-years-old and hails from Florida. Bromell was the first junior ever to break the 10 second barrier but his initial promise has faded away over the last few years, including failing to make the Olympic final. However, he burst back into form in 2021 and set his PB of 9.76 in Kenya in September.

Jacobs is the 2020 Olympic Champion and the first ever Italian to qualify for an Olympic 100m final. The 27-year-old was born in El Paso, Texas but spent much of his life in Italy due to his Italian mother. He is an extremely fast starter and won the 60m World Championships earlier this year. He is also an excellent Long Jumper.

The current World Champion at this distance, Coleman has had a chequered past in the 3 years since. The 26-year-old missed the 2020 Olympics due to a drug ban, which was subsequently shortened, but still resulted in him missing the biggest event in Athletics. Another superb sprinter and starter, Coleman holds the World Record for the indoor 60m distance.

The Canadian De Grasse is more of a 200m specialist and the current Olympic Champion. However, The 27-year-old has still managed to pick up several bronzes at the 100m distance in the recent major championships so will clearly present a threat to the medal places.

The veteran Blake is perhaps a little past his best having won gold at the 2011 World Championships as the youngest 100m world champion ever. Now 32, the Jamaican Blake was unlucky to be running alongside his more illustrious countryman Usain Bolt during the 2010's, finishing twice in 2012 with the fastest times not to win a gold medal. Blake failed to make the 2020 Olympic final so looks a long shot to contend here.

Who are the British hopes?

The 26-year-old is a silver medalist at the European Championships but hasn't run under 10 seconds since 2019. Will struggle to make the final.

Anguillan-born Hughes is the 2018 European Champion at this event and his PB makes him the 2nd fastest Briton of all time behind Linford Christie. The 26-year-old qualified for the 2020 Olympic final but was disqualified due to a false start.

The Tokyo Olympics will finally get underway this week and although Great Britain aren’t expected to win it, they’re…