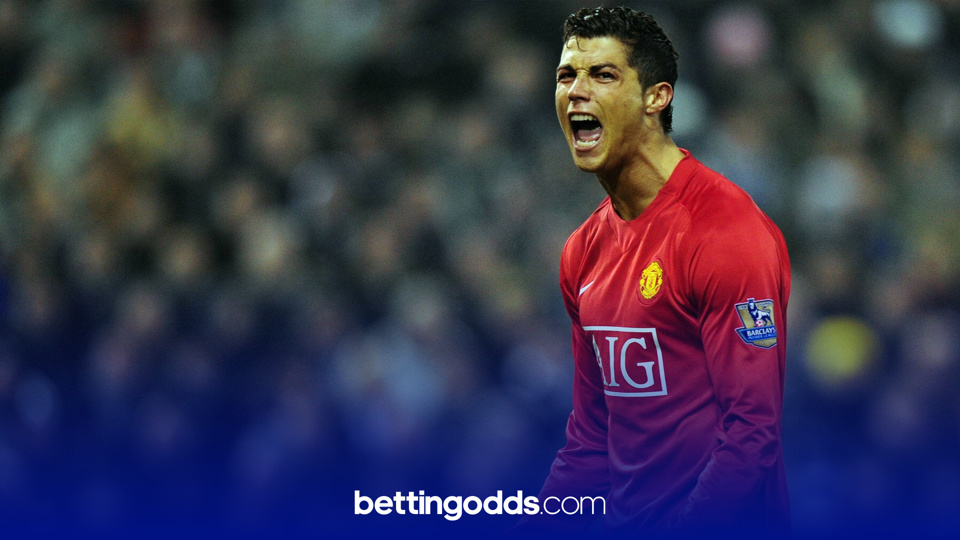 Cristiano Ronaldo has completed a sensational transfer to Man Utd, which blew up the internet recently. The Portuguese international returns to Old Trafford 12 years later and will be looking for not only goals, but trophies for the club. It’s no secret that Ronaldo is one of the most prolific forwards the game will ever see and he’ll be looking to continue his goalscoring form from Juventus to Man Utd. In his first stint at Manchester United, he scored 118 goals in 292 games and assisted 69 times.

The bookmakers have priced up all sorts of markets following his sensational return, and we’re going to take a look at where the value might be for the Red Devils’ new forward.

Cristiano joins the betting market as the 5/1 second-favorite with most bookmakers, just behind Romelu Lukaku who got off to scoring ways in a Chelsea shirt in his first game back for them, and Mo Salah who is always in the mix for the golden boot. Man Utd’s star man will definitely be keeping his eye on the golden boot award which he won back in 07/08 with a staggering 31 league goals in 34 games. CR7 is simply a born goalscorer. Everywhere he has gone he has scored goals. He actually has 19 top scorer medals to his name and when you hear something like that, the 5/1 might seem like a decent bit of value.

Many people are thinking Ronaldo will be the new man for penalties instead of Bruno Fernandes, which could boost his chances to win the award even more. His main threats are of course Lukaku and Salah. Romelu drifted over the weekend to 10/3 from 11/4 and Mo Salah is now priced at 7/2 following a goal against Chelsea. It’s a big ask for Ronaldo considering the number of goal scorers Man Utd have and the fact that he’s missed three games already, however you can get four places still on the market if you want to go each-way.

There was a controversial win with this award for Kevin de Bruyne last season when many thought it should have gone to either Harry Kane or Ruben Dias. This award can sometimes become a bit of a popularity contest and marketing-wise, no one beats Cristiano Ronaldo. The bookmakers have currently got him priced up as the 6/1 favourite for the award.

There’s no doubting his ability as a player but he’s also one of the most famous people in the world which could also help him win some votes for this award. The 36-year-old actually won this award back to back in the 06/07 season and again in the 07/08 season so it wouldn’t be too surprising to see him win the award again. I feel like 20-25+ Premier League goals will probably be enough to see him win this award and he’s going to be more than capable of scoring that many in the United team.

Kevin de Bruyne is right next to him in the market at 15/2 and a win this year would mean KDB has won three in a row which no one has ever done. Man City are the EVS favourite for the Premier League title and a trophy-winning campaign will only boost the Belgians chances at the award.

We’re talking about Mr Champions League here. Cristiano is absolutely out of this world when it comes to this competition and to see him at 9/1 is quite surprising in my eyes. Presumably, the bookies aren’t fancying Man Utd’s chances in Europe this season but with the addition of the veteran, they’re certainly worth a look at.

In 176 Champions League games, he has been involved in 182 goals, scoring 134 and assisting 48. Just to add to this I think Man Utd should have a fairly comfortable time in their Champions League groups where they have been drawn against Young Boys, Villarreal, and Atalanta. The 36-year-old could definitely rack up a few goals against these teams especially considering Man Utd are the favourites to top this group.

Haaland, Lewandowski, Messi, and Lukaku are all above him in the market in that order. It’s surprising to see Haaland so low but his goalscoring record in the competition is also incredible. Lewandowski is always the man to look to for Bayern in general, and this season there seems to be no slowing down for him on the goalscoring front. Messi is going to be an interesting one for PSG but you’ve also got to consider that they’ll have Neymar and Mbappe also scoring goals. Ronaldo is going to be Man Utd’s main goal-scoring output so that 9/1 may shorten fairly quickly during the group stage.