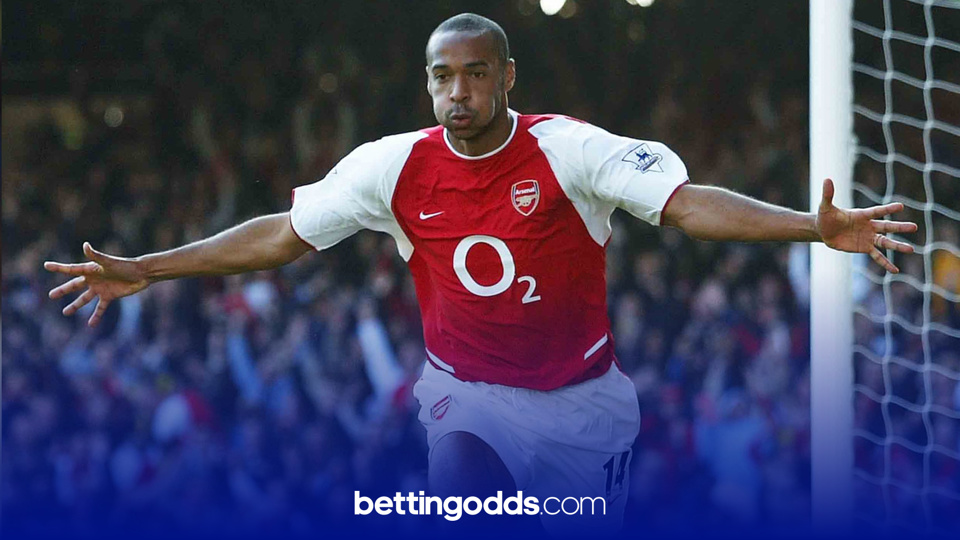 Exactly 21 years ago today, history was made in the Premier League when Thierry Henry signed for Arsenal.

The fresh-faced Frenchman is arguably the greatest player to ever grace the English top-flight, and departed north London in 2007 having contributed 228 goals and 95 assists in 375 appearances.

Below, we pay homage to the Gunners Great and look at five of his best moments for club and country, alongside picking out some of the key odds behind each memory.

Possibly Henry’s greatest goal in an Arsenal shirt, this sensational volley against Manchester United at Highbury is a Premier League Years classic and lives fresh in the memory of our generation.

He receives it on the half turn (all the while holding off Roy Keane), has the audacity to flick it up, turn and then volley it into the top bin with minimal effort whatsoever. If I tried this it would result in several lost balls and a sprained ankle. Life’s unfair.

The best thing about this goal is that it was scored during a period where the rivalry between Arsenal and Manchester United was at its very peak. Both sides were hugely successful and dominated the Premier League and whenever they met it was an incredibly fiery encounter.

United would have hated conceding a goal of this quality, but Roy Keane probably decked himself after the game for letting Henry get the shot away in the first place - even though there was literally no way of stopping it.

Thierry Henry's volley changed my perception of what you could do on a football pitch. This goal is my dream Worldie Challenge recreation. https://t.co/EimA5g1R47

Arsenal Invincibles season in 2003-04 is one of the most talked about campaign’s in Premier League history, and this 4-2 win over Liverpool as the season reached its business end was as emphatic as they come.

After a disastrous week saw Arsene Wenger’s side dumped out of the FA Cup and Champions League by Manchester United and Chelsea respectively, Liverpool threatened to cut The Gunners’ lead at the top of the table.

Indeed, a stunning Thierry Henry hat-trick helped fire Arsenal to a 4-2 win over the Reds at Highbury, in turn extending the north Londoners’ lead to seven points at the summit of the division.

The hosts were even money favourites to see off their north west counterparts, who were priced at 5/2 to clinch three points on the day, before kick off.

Interestingly, at the start of the 2003-04 season Arsenal were an astonishing 5000/1 to go through the entire league campaign unbeaten, and you could have still got odds of 8/1 for them to complete the job prior to this magnificent win over Liverpool!

See how the odds changed as the #Gunners made history 👇 https://t.co/WfANTAXOQk

Dumping Brazil out of the World Cup, 2006

France famously made it through to the 2006 World Cup final, but fell to Italy at the last hurdle no thanks to a certain Zinedine Zidane completely losing his cool at Marco Materazzi, taking his anger out on the Italian defender via an extremely niche headbutt to the chest.

However, before that clash Les Bleus needed to make it past holders Brazil in the quarter-finals.

The South Americans were huge favourites to knock France out of the competition - priced as short as 3/4 prior to kick-off - while Raymond Domenech’s side were as high as 4/1 for the win pre-game.

A tight affair was settled by the ever-reliable Henry swooping onto a deep free-kick from Zidane just before the hour mark. The elegant front man latched onto the set-piece at the back post, before vollying home first time with the inside of his right foot. Beautiful.

After lighting up English shores for eight years, Henry moved to Spain and signed for Barcelona. While his tenure in Catalonia only lasted three seasons, the silky Frenchman still enjoyed a trophy-laden spell across the Bay of Biscay, winning a historic treble under Pep Guardiola in 2008-09.

Henry scored 46 goals in 121 appearances for Barca between the years of 2007-2010, but his brace in a 6-2 demolition job on bitter rivals Real Madrid are perhaps two of his most memorable, considering who they came against.

The 2008-09 campaign was Barcelona’s peak in recent history, with Guardiola orchestrating a side containing the likes of Lionel Messi, Xavi, Andreas Iniesta, Samuel Eto’o and Thierry Henry. They were an absolute pleasure to watch and essentially changed the way football was played in many ways.

Madrid suffered a humiliating 6-2 defeat in their own backyard on 2 May 2009, as the rampant Catalans steamed further towards the La Liga title.

Barca were given a 38% chance of victory pre-match with their odds of 8/5, while Los Blancos were actually priced as slight favourites at 7/5!

#Messi and #Henry netted a brace apiece in a famous #Barca win. 🏟

After leaving Barcelona in 2010, Henry spent the final years of his career with New York Red Bulls in the MLS, where he’d help revolutionise football in America by contributing 52 goals and 42 assists in 135 appearances.

The Frenchman, now at the very end of his career, re-signed for Arsenal on loan in January 2012 to maintain match fitness ahead of the new season starting in the US. His tenure back in north London was not expected to be too memorable, and his services were only required as cover for the likes of Gervinho and Marouane Chamakh, who were both away at the African Cup of Nations.

Having treated Highbury as a playground for so long, playing at the Emirates was a new experience for Henry, but one that he would grab with both hands in an FA Cup third round tie against Leeds United. Rising off the bench with the scoreline poised at 0-0, the Gunners legend latched onto a through ball from Alex Song, opened his body up and slotted home in the far corner in true Thierry Henry style to win the game for his beloved club.

Henry proved to spare Arsenal’s blushes with that late goal, considering they were priced as short as 1/4 to see off the West Yorkshiremen (10/1 to win) on home soil.