Liverpool v Everton Betting: Why Thiago's numbers all point to a booking this weekend

Thiago is currently averaging 2.45 fouls per game in the Premier League this season, higher than any other player to have played over five games
By Anthony Eadson
16:03 Friday 19th February 2021 - 5 minute read

When Thiago Alcantara signed made the switch to the Premier League many expected the Spaniard to give Liverpool’s midfield a new dimension. After picking up 196 points across two seasons the idea was that Thiago could only add to this side, however lately the midfielder has come under some criticism, with former Reds stalwart Jamie Carragher labelling him a “defensive liability”

There is no denying that Thiago is one of the best deep-lying playmakers in the game and the way he keeps the ball moving has been a positive for Jurgen Klopp’s side. One particular area of the former Bayern Munich man’s game that has come under scrutiny lately, though, is tackling and the high volume of fouls he is committing. With the small matter of the Merseyside derby on Saturday we’ve taken a look at a few of Thiago’s statistics with an eye towards him picking up a booking at Anfield.

Top of the table for fouls

Shortly after the season kicked off back in September Thiago picked up an injury that left him on the treatment table until the end of December. The 29-year-old has started just eight Premier League games and has made three substitute appearances this season.

When looking at Thiago’s stats, his large quantity of fouls catch the eye with him recording 2.4 per game and 2.96 per 90 minutes. Those are high numbers and although breaking up play and stopping counter attacks have always been part of his manifesto, he has struggled with the pace of the game, which has been left exposed at times. This has led to Thiago making plenty of tackles and if we look below at the most fouls per game in the Premier League of players to have made over five appearances this season, he ranks first. 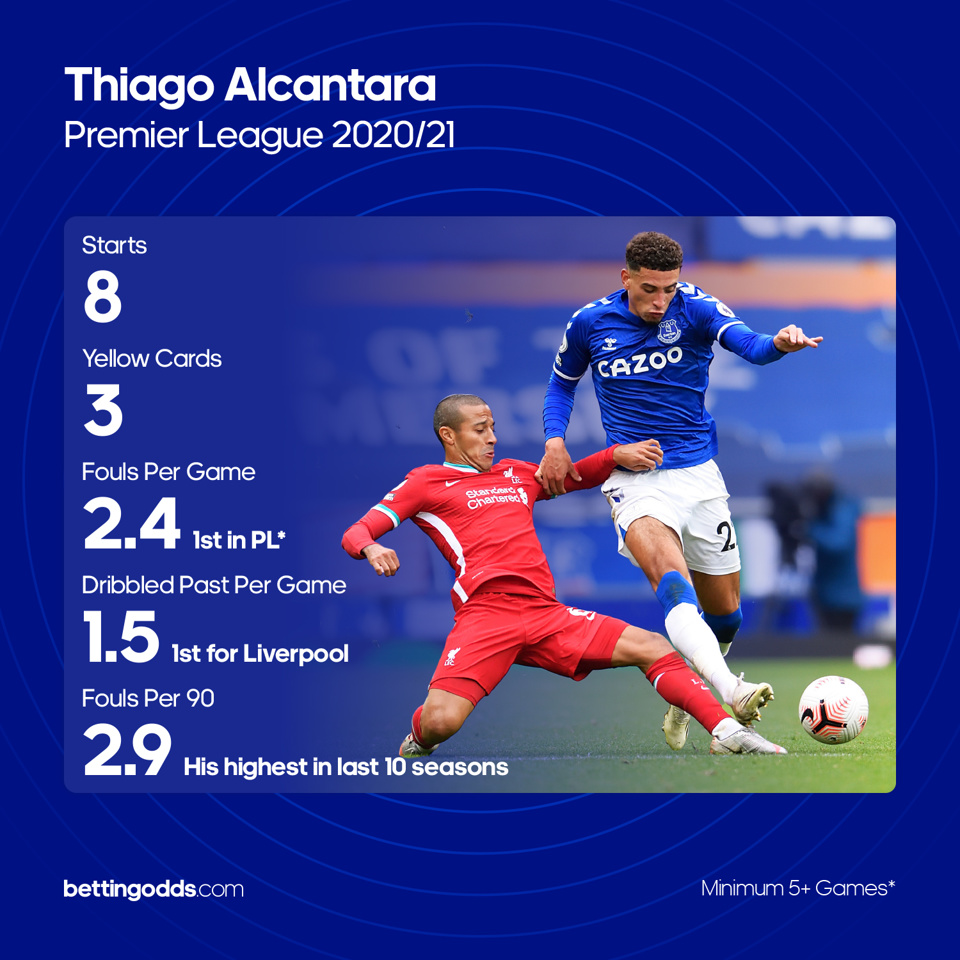 Breaking up play is nothing new, but the high volume of fouls is

With Liverpool often having to play Jordan Henderson or Fabinho in central defence, they have lost power in the engine room which has left Thiago exposed. On average Thiago is currently being dribbled past 1.5 times per game which is higher than any other player at Liverpool this season.

In his final Bundesliga season in Germany, the midfielder picked up seven yellow cards in just 24 appearances. For Liverpool, he’s already had three cautions in just eight league starts and the timing of his tackles has been questionable in certain games.

Thiago’s figure of 2.9 fouls per 90 minutes will in fact be the highest figure he has ever yielded for a season in his career should he continue at this rate. Below, we’ve listed his last ten league campaigns where you can see a sharp rise from his previous season.

Thiago, fouls per 90 mins throughout his career

So, will he pick up a card against Everton?

After three yellow cards in eight league starts, the burning question is will he pick up a booking against Everton. Let’s have a look at the referee for the game, Chris Kavanagh. The official currently averages 3.07 yellow cards per game, which ranks him eighth out of nineteen officials to have taken charge of a top-flight game this term. One other factor worth mentioning here is that Kavanagh actually ranks third for fouls per game given this season with 24.29 on average.

The Previous game at Goodison

Cast your minds back to October and the 2-2 draw that Liverpool and Everton played out at Goodison Park. It was a feisty game that included Virgil Van Dijk picking up a season-ending injury courtesy of a Jordan Pickford tackle. Then there was also Richarlison’s ridiculous challenge on Thiago which should remain in the memory of the Spaniard in a game that yielded five yellows and one red card.

Having a look at the current prices from the bookmakers and it’s BetVictor who at the time of writing are offering the best odds on Thiago finding his way into Chris Kavanagh’s notebook on Saturday, with odds of 18/5 (4.6). Betfair and Paddy Power are slightly shorter with 7/2 (4.5) being offered in their odds boost and power price sections on-site.

Merseyside derbies have more than just a tendency to be fiery clashes with this fixture having produced more red cards than any other in Premier League history. With Thiago’s recent foul figures in mind married with what happened in the reverse fixture in October, we’re fancying the former Barcelona and Bayern man to be shown a card at Anfield.

We’ve got a full range of football tips on BettingOdds.com this weekend, including a full preview for Liverpool v Everton which can be seen live on Sky Sports kicking off at 5:30pm. As always, please remember to gamble responsibly.