Shoot on sight: The incredible stats which crown Bruno Fernandes as the king of shots on target 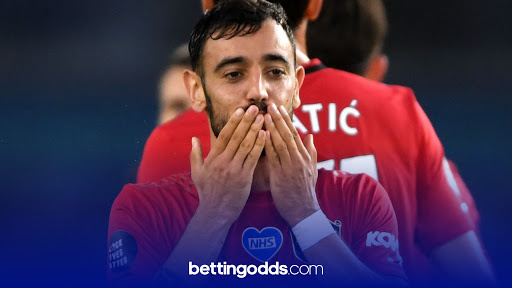 Bruno Fernandes has been a revelation since joining Manchester United from Sporting CP in January. The Portugal international has adapted to the speed and intensity of the Premier League effortlessly and looks to have an incredibly bright future in the English game.

He has also massively improved a United side which desperately lacked a creative spark when Paul Pogba’s off days started to become a more regular occurrence, while his presence in the side has also benefited teammates like Marcus Rashford and Anthony Martial, with the pair impressing prior to the break and seemingly picking up where they left off since the top-flight restarted last month.

Contributing six goals and four assists in just 13 appearances for the Red Devils, it’s fair to say that Fernandes has settled in well at Old Trafford. The 25-year-old was on the scoresheet during United’s 3-0 win over Brighton on Tuesday night, netting two goals to extend his club’s unbeaten run to four games and put them to within touching distance of a spot in the Premier League top-four.

Fifth-placed United are now just two points behind Chelsea in fourth, and a win over relegation-threatened Bournemouth this weekend could see them leapfrog the Blues should Frank Lampard’s side lose to Watford in Saturday’s late kick-off at Stamford Bridge - Fernandes is largely to thank for the Red’s recent upturn in form.

What is perhaps most impressive about the former Sampdoria man is his shooting ability from range. Since joining United in January, Fernandes has only failed to register a shot on goal twice - in the respective 2-0 wins over Chelsea (17 February) and Manchester City (8 March).

In his debut game for the Red Devils, against Wolves, Fernandes was priced up at a huge 10/1 to have 2+ shots on target by bookmakers. The 25-year-old took five shots on goal that game - three of which were on target - and in turn instantly put his name on the map in the Premier League.

After the win over Chelsea, where Fernandes would hit the post from a free-kick but fail ever so closely in registering a shot on target, United’s new signing was instrumental in the club’s 3-0 win over Watford by scoring a penalty. Four days later and he was at it again, this time against Club Brugge in the Europa League, scoring another spot-kick and taking four shots on goal - three of which were on target.

Momentum was really starting to build for Fernandes on English shores, and clearly full of confidence he headed into United’s game against Everton ready to wreak more havoc. He did just that with another goal in a 1-1 draw, and although he only found the back of the net once, any punters who backed him to have one/two+ shots on target would have been licking their lips after he registered three (on target) against the Toffees and six overall.

In United’s final game before the break, a 5-0 demolition job on LASK in the Europa League, Fernandes was again in emphatic form. Despite not scoring, the midfielder took a total of five shots on goal - two of which were on target - once again pleasing SOT backers across the country. 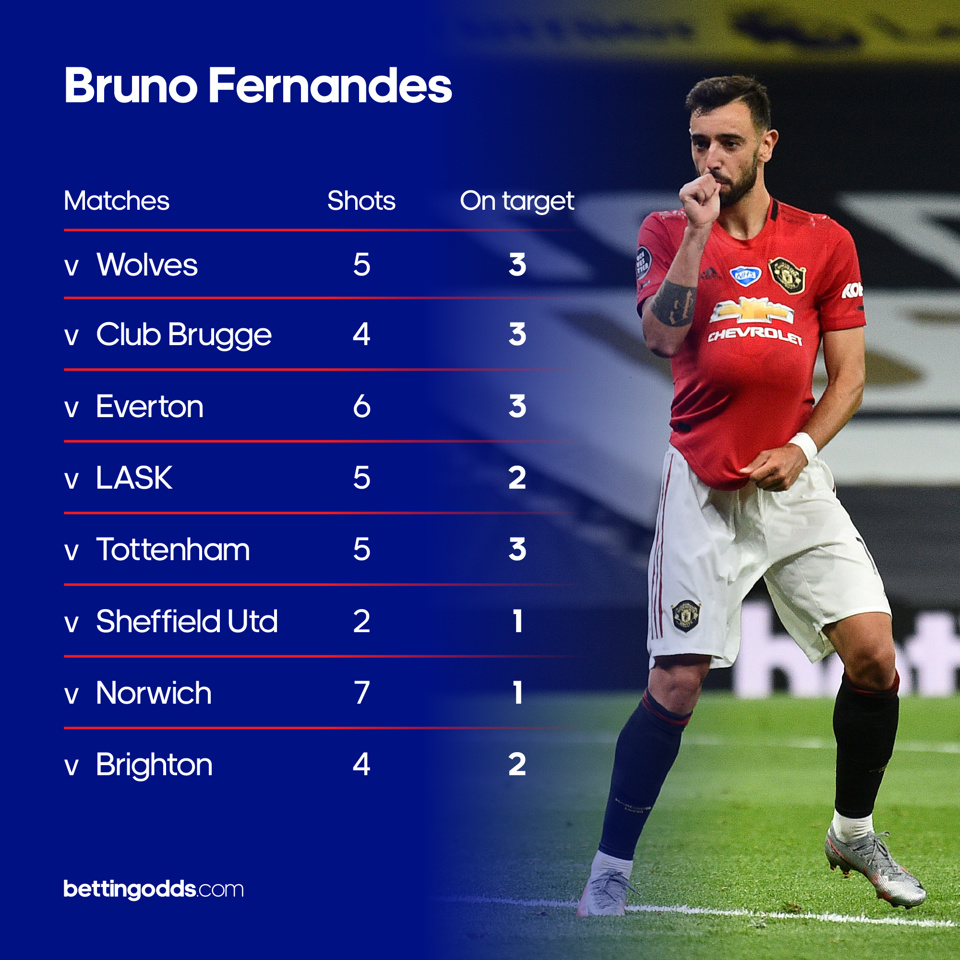 Since the restart, Fernandes has seemingly picked up where he left off. The 19-cap Portugal international has registered at least one shot on target in each of United’s four games, scoring twice against Brighton in midweek.

Against Norwich in the FA Cup he registered a whopping seven shots on goal (sadly just one of those ending up on target), which shows just what a positive player he is and how he’s always looking to get shots away from range.

Fernandes is the king of shots on target, but unfortunately that crown comes at a cost, for us. The bookmakers have been quick to cotton on to his shooting habits, slashing his price for the market week by week.

Against Bournemouth this weekend the 25-year-old is as short as 1/12 to have one or more shot(s) on target, while his price to register two or more against the Cherries is just 4/7 - a far cry from the 10/1 he could be found at ahead of his bow against Wolves back in January.

Those odds will obviously increase a little against stronger opposition, so it is worth always looking into his price for the SOT market when choosing your bets for a United game. Definitely one for the Fantasy Football team, too.