It’s been a tough and gruelling process but in the end there could only be one victor in The Sack Race’s Top-5 2019/20 EFL Managers of the Season: Gareth Ainsworth.

The EFL’s longest-serving manager - at the time - may not have won a league title, however he did conjure up the fairytale story of the season after he soared Wycombe into the Championship for the first time in their history. Let’s take a closer look...

Every manager’s trajectory is different. Yet there is something incredibly special about a manager who started from scratch, learnt on the job, resisted the lure of bigger clubs, saved his side from relegation on multiple occasions, battled against financial limitations yet continues to exceed expectations and, in turn, lead a club from the foot of the Football League into the Championship.

In an era of instant gratification and short-term tenures, Gareth Ainsworth has worked miracles over an eight-year period, bringing Wycombe fans goosebump moments that will be forever cherished.

Ainsworth’s side finished the strangest of EFL seasons in jubilation at Wembley after they sealed an historic and unexpected promotion to the Championship following a 2-1 win over Karl Robinson’s Oxford. The crowning moment of the club’s 133-year history to date.

However, it could have been so different if the long-serving manager had left Wycombe in the opening few months of the season. The likes of Sunderland, Lincoln, Millwall and Southend were all after his services over the autumn period. "I’m ambitious,” Ainsworth said at the time. “I want a club that has ambitions to play in the Championship, to be as high as they possibly can.”

Those were nervy times for Wycombe fans but in the end Ainsworth remained loyal to the Chairboys, a decision that has well and truly paid dividends.

It’s a managerial journey that began in the early weeks of the 2012/13 campaign when he was named caretaker/captain of the club. He kept Wycombe in the Football League on goal difference in his first full season, then a year later he agonisingly lost on penalties in the League Two play-off final. Cut to 2018 and he’d fired Wycombe into League One, then successfully preserved the club’s third-tier status. 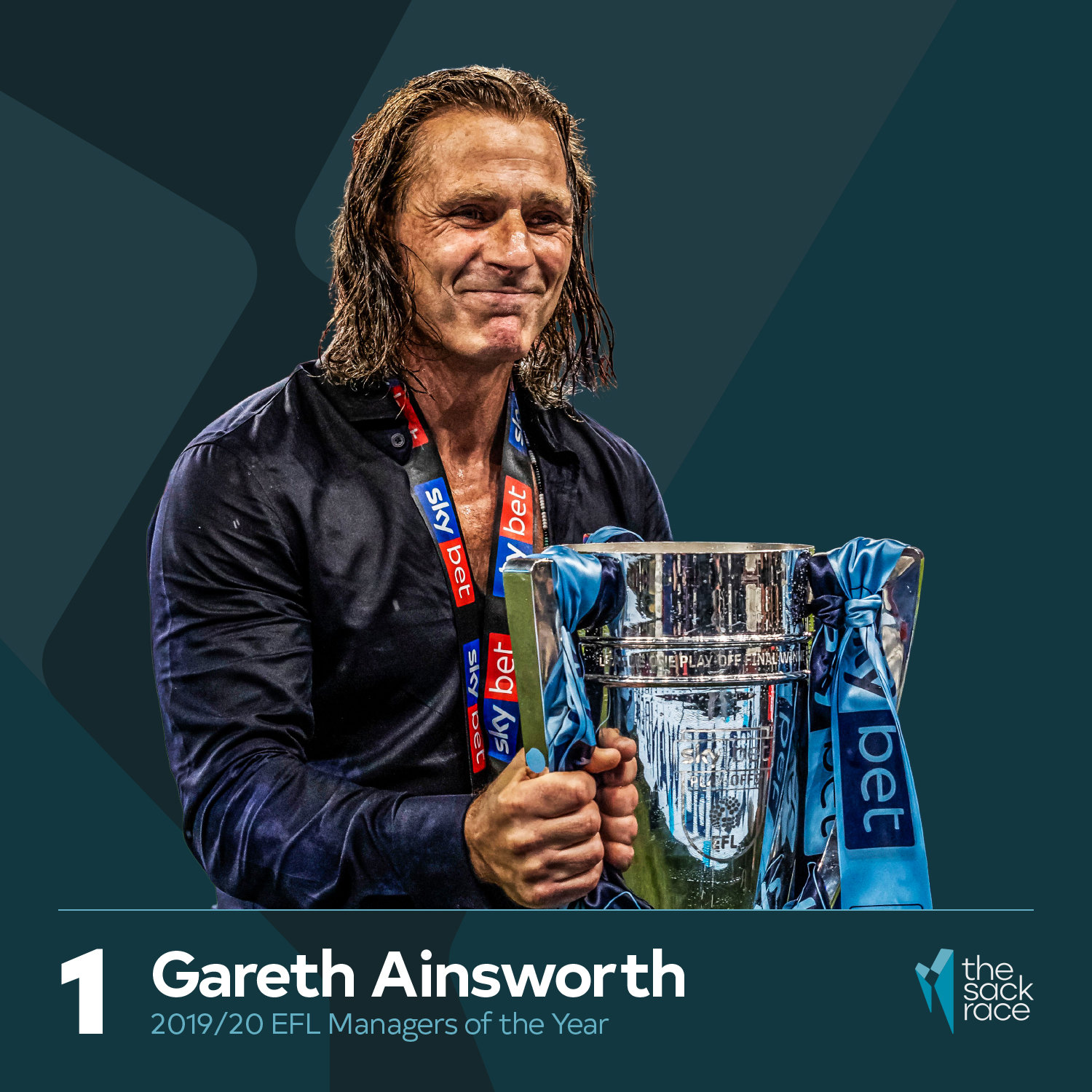 External aspirations may have been low ahead of the 2019/20 season: Wycombe were 66/1 outsiders to win the league, a 16/1 shot for promotion, and the third favourites to be relegated. However, Ainsworth’s men made a mockery of their pre-season odds as they roared out of the blocks, suffering only the one defeat in their opening 20 games through to mid-December.

A tough and testing festive period followed and while results dropped, at least The Cold Blooded Hearts’ Christmas single ‘The Wanderer’ provided some cheer - Ainsworth is the lead singer. The boss, who idolises Mick Jagger, then picked his troops up and recorded some pivotal wins during a hit-and-miss start to the year before the season was stopped in March.

The Points-Per-Game formula came into play, a system Wycombe benefited from as they moved from 8th to 3rd in the League One table, which meant they had sealed a prized place in the play-offs.

Philosophies and styles may be all the rage at the moment but Wycombe shunned all that razzmatazz in favour of effective and results focused football. No team picked up more points on home soil than Wycombe. While they may not have swept many teams aside, their determination, mental focus and concentration shone through as nine of their 17 wins were recorded by a one-goal margin.

Ainsworth created a winning environment and then seized upon brilliant opportunism as Wycombe hammered Fleetwood 4-1 away to effectively end the play-off semi-final as a contest.

In the build-up to their showcase spectacle at Wembley the club’s sports scientist and analyst reportedly got involved in training matches as there weren’t enough players.

Oxford were then beaten in the final and the team that many predicted would sink back down to League Two had conjured up the most unlikely of promotions to the Championship - unchartered territory for the club.

“It’s an amazing feeling,” Ainsworth said in his post-match press conference. “To take this club into the Championship is surreal. It’s beyond my wildest dreams.”

- 2015: Survived relegation to the Conference on the final day of the season
- 2017: Missed out on automatic promotion and lost in the Play-Offs
- 2018: Promoted to League One
- 2020: Promoted to the Championship for the first time ever 👏

It’s almost incomprehensible to think that Wycombe didn’t even have 11 players on the opening day of pre-season. Any manager would have been deflated at returning from their summer break only to discover half-a-team. But, aided by the arrival of American businessman Rob Couhig, Ainsworth worked his magic in the transfer window. He snapped up the likes of David Wheeler, Jack Grimmer, Alex Pattison and Fred Onyedinma for free, and utilised the loan market effectively by acquiring the services of Nnamdi Ofoborh and Paul Smyth.

Club captain Matt Bloomfield and Adebayo Akinfenwa thrived as leaders, Darius Charles was a true inspiration, while the contribution of defender Joe Jacobson was pivotal. He even scored a hat-trick - not bad for a left-back. However, it was the team’s cohesion and collectivism which brought about promotion.

So, the rockstar man-manager with lucky cowboy boots orchestrated a fairytale success story on limited resources but buckets of belief, and with that said: Gareth Ainsworth, we hail you as The Sack Race’s 2019/20 EFL Manager of the Year!

Gareth Ainsworth might just be the coolest manager around! 😎 pic.twitter.com/eD5J7m8x37