The miraculous odds behind Greece's journey to becoming European Champions

2020 has been a bizarre year, to say the least. Somehow it is now July and it feels like the whole world has been in hibernation since early-March due to the coronavirus-enforced lockdown.

The Premier League is still on our screens despite this time of the year typically being the start of pre-season training for clubs. Perhaps most disappointingly, though, the scheduled European Championships - which we would now be approaching the business end of - have been postponed until next year.

Right now I should be writing articles overhyping an England side who look ‘promising’ after beating the Czech Republic 2-1 in the group stages of Euro 2020.

I should be telling the world that Jadon Sancho is the future of English football and that Marcus Rashford is going to single-handedly win us our first major international tournament since 1966. But I'm not, and that’s a shame.

What I am going to do, however, is take you all on a trip down memory lane, right back to 2004 when rank outsiders Greece provided one of the biggest shocks in football history by winning the European Championships, exactly 16 years ago today.

150/1 shots to win their first major tournament before the competition kicked off on 12 June 2004, Greece lined up against hosts Portugal in their group stage curtain-raiser with little to no hope of going the distance.

This was, remember, a country who had never even won a game at a major international tournament; a country whose last visit to the European Championships had come back in 1980, where a lonesome 1-1 draw against Czechoslovakia - a team who cease to exist in 2004 - was to be the limit of their success in Italy.

Priced at 5/1 (an implied chance of just 17%) and firm underdogs for the win that day, Otto Rehhagel’s side got off to the perfect start when Georgios Karagounis found the net after a superb solo run in the 7th minute.

Things got better for Greece after half-time when Angelos Basinas converted a penalty in the 51st minute which meant that, despite Cristiano Ronaldo’s last-minute header in added time, Greece had kicked off their European campaign in the best way possible by winning 2-1.

Full of confidence after beating the tournament hosts in their own backyard, Greece headed into their second match against Spain full of confidence, but knew that they’d have their work cut out to repeat their exploits against a side containing the likes of Carles Puyol, Romero, Xavi and Raul (among plenty of others).

Indeed, another impressive performance ensued and Greece managed to hold Inaki Saez’s side to a 1-1 draw after initially falling behind through a Fernando Morientes goal in the first-half. Angelos Charisteas’s 66th-minute strike was enough to maintain his country’s unbeaten record in Group A, with the full-time draw priced up at 21/10 before kick-off.

The Greek’s did hit a slight bump in the road in their final group stage clash against Russia, losing 2-1 to the Eastern Europeans, but qualified for the quarter-finals thanks to Portugal beating Spain 1-0 in the group’s other final match, in turn knocking the Spaniards out on goal difference.

Things had now become very real for Greece, they had made it through to the quarter-finals against all odds but the end of the road looked to be approaching with holders France standing between themselves and a spot in the semi-finals.

This is a team which contained Thierry Henry in his absolute prime, a player who is arguably the best central midfielder to ever play the game in Zinedine Zidane, alongside the likes of Claude Makelele, Robert Pires, Patrick Vieira and Marcel Desailly.

Vieira and Desailly were actually rested for this clash, with manager Jacques Santini clearly having one eye on the semi-finals and disregarding the strength of his opponent.

If that was the case, it certainly came back to bite him as Greece put in a typically organised performance, again enjoying the lesser share of possession and taking fewer shots on goal (five to France’s eleven) but winning 1-0 thanks to a bullet header from Angelos Charisteas in the second-half. Onto the semi’s..

The Czech Republic’s route to the semi-finals was slightly more straight forward. Having won their group without dropping a single point, Karel Bruckner’s side comfortably dispatched Denmark 3-0 in the quarter-finals before facing the tournament’s surprise package in the competition’s penultimate round.

Czech Republic entered the game as favourites, with underdogs Greece priced up at 4/1 - given just a 20% chance of winning.

After a goalless 90 minutes, the game was finally settled in extra-time courtesy of defender Traianos Dellas heading home a corner in the 105th minute; Greece were heading to the final of the European Championships for the first time in their history.

They would play Portugal, the hosts, and the side where it had all began just three weeks prior. Felipe Scolari’s side had famously knocked out England on penalties in the quarter’s before edging past the Netherlands 2-1 in the semi-finals.

Unsurprisingly, with a team containing Luis Figo and a fresh-faced Cristiano Ronaldo Portugal were firm favourites, given a 57% chance of beating Greece prior to kick-off, while Otto Rehhagel’s side were 4/1 shots to win in 90 minutes.

The final was played out in a familiar manner, with Greece’s resilient defending frustrating Portugal and chances coming few and far between.

Again it was the hosts who enjoyed the lion share of possession (58%) and took more shots on goal (17 to Greece’s four), but it meant nothing when that man Charisteas scored his third goal of the tournament with a carbon copy of his effort against France in the quarter’s, heading home from a corner just before the hour mark.

Otto Rehhagel had engraved his name into German football history when he guided FC Kaiserslautern to a miraculous title-win in 1998, in doing so becoming the first and so far the only manager to win the Bundesliga with a team who were promoted from the second-tier just the season before.

Six years later and he had done something very similar, this time on the international stage with Greece, winning the European Championships against the odds; all 150 of them, to be precise. 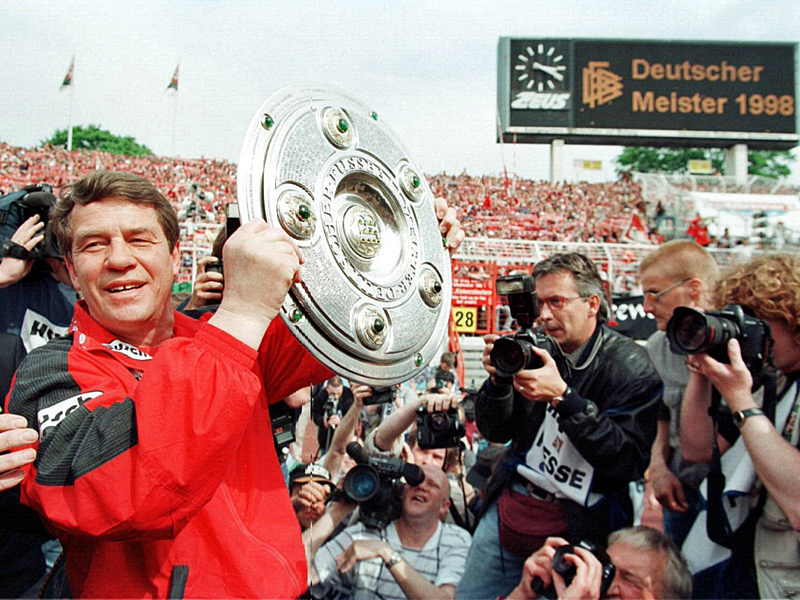 Their manager was Otto Rehhagel who in his next job guided 150/1 Greece to Euro 2004 glory... 🤩 https://t.co/iFepFHZoNw https://t.co/fAWkwWRiNc