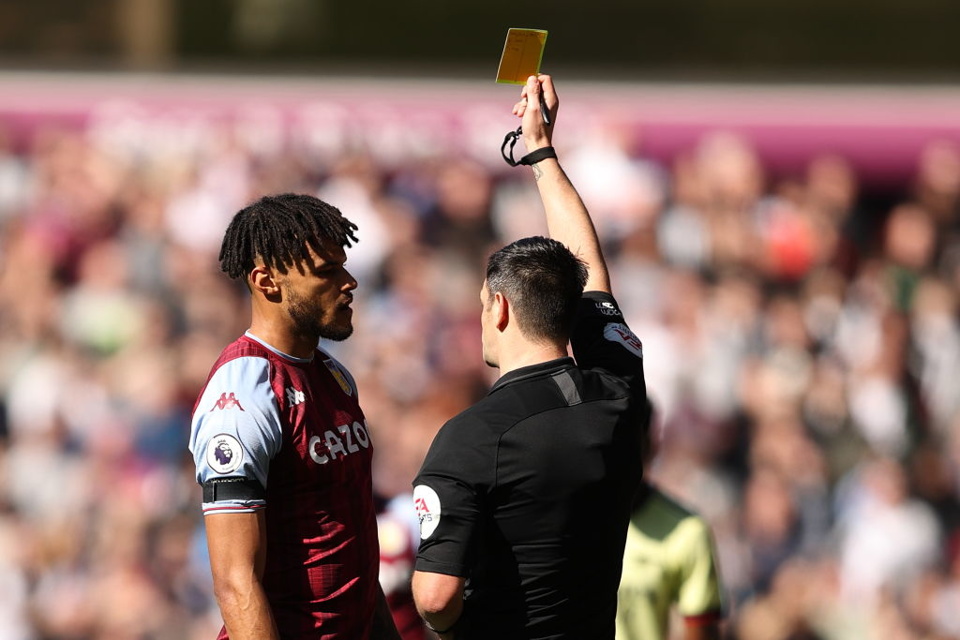 No player in the league picked up more cards than Tyrone Mings last season with 11
By Anthony Eadson
09:30 Saturday 27th August 2022 - 4 minute read

Three Premier League matches take place on Sunday with Wolves against Newcastle and Nottingham Forest against Spurs being the two live offerings on Sky Sports. Aston Villa host West Ham in the afternoon’s only other top-flight fixture and we’ve provided you with our best accumulator tips and have picked out three selections we like the look of.

The treble pays best with bet365 at 103/1 although the tipster is recommending playing the trixie, meaning it will be profit if two of the three land.

The first player I’m targeting for a card on Sunday is Tyrone Mings. Aston Villa welcome West Ham to the Midlands in this all claret and blue affair, with neither side having got off to the best of starts in the league, having just three points between the pair.

Back in the side after his early season spat with Steven Gerrard, and needed even more than ever since the injury to Diego Carlos, Mings will have Michail Antonio to deal with on Sunday. Only 10 players in the division drew more fouls than the West Ham forward last season which fits in nicely with Mings’ disciplinary record.

Last season three players led the way with the most yellow cards in the Premier League, with Junior Firpo, James Tarkowski and Tyrone Mings each collecting 11. Furthermore, we also have a good referee for cards on this game with David Coote taking the whistle. Of all the top-flight officials to take control of 10+ games last season, Coote ranked highest for yellow cards with an average of 4.6 shown per game.

Remaining in the Midlands and we are next off to Molineux where Wolves take on Newcastle. The Magpies were involved in a thrilling 3-3 draw with Manchester City last week and one of their best players in that game was Allan Saint-Maximin. The Newcastle forward’s pace and trickery is proving a problem for plenty of defenders this term and has drawn a yellow card from four different players in just three matches. 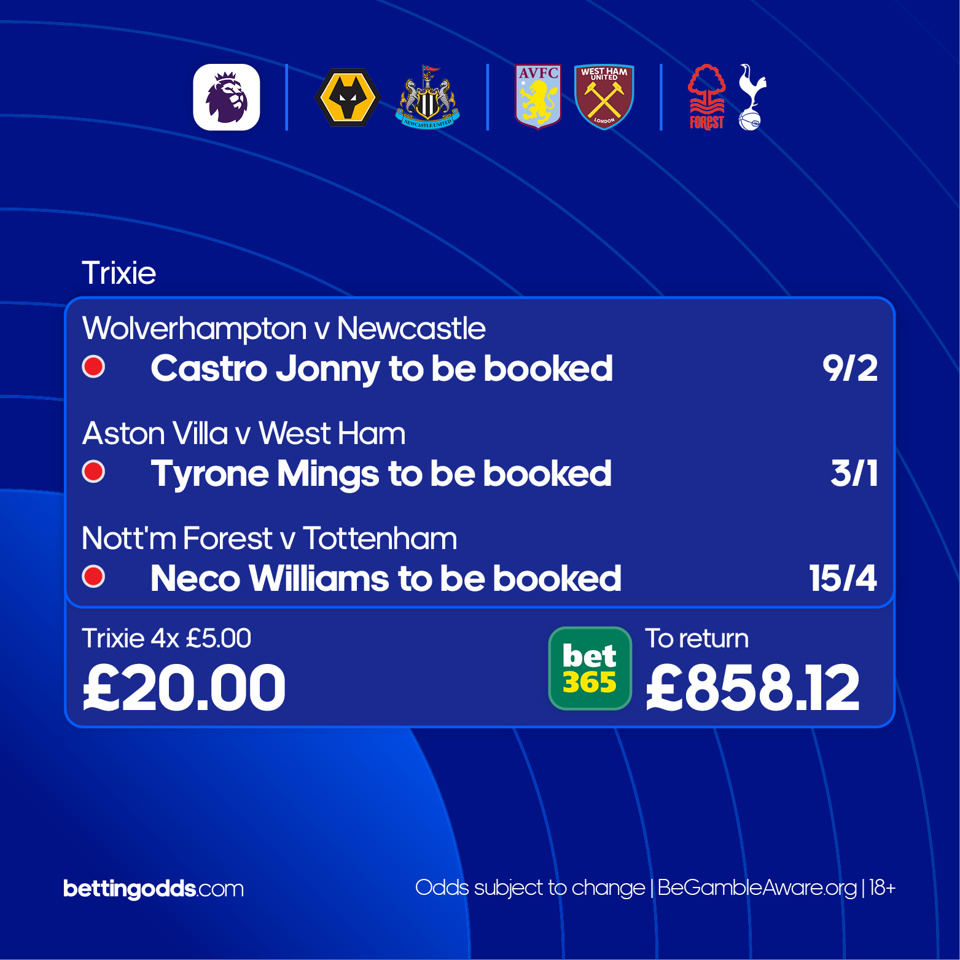 John Stones, Solly March, Joe Worrall and Neco Willliams are the quartet who have all become a cropper under the lure of ASM this term and found their way into the book. With this in mind I’ve taken a lean towards Wolves’ Jonny Castro to be carded on Sunday with him being the direct opponent of Saint-Maximin, and at 9/2 he makes appeal in this market.

The final player in this 103/1 Trixie is Neco Willliams of Nottingham Forest. Steve Cooper’s side face Tottenham at the City ground on Sunday in what could be their toughest test yet since returning to the big time.

Williams made the switch to the City Ground this summer after signing a four-year contract for a fee reported to be around £17m. The Wales international has started and played the full 90 minutes in all three league matches so far for his new employers, and has been shown a yellow card in two of those.

To recap, that’s Tyrone Mings, Jonny Castro and Neco Williams all to be carded in a trixie. It’s also worth noting that we have three of the best referees in charge on Sunday in terms of yellow cards from their stats last season. Of the officials to take control of 10+ matches in 2021/2022, David Coote (Villa vs West Ham) ranked first for yellows per game (4.6), Peter Bankes (Wolves vs Newcastle) ranked second (4.5), and Craig Pawson (Forest vs Spurs) ranked fourth with an average of 4.3 yellows per game.