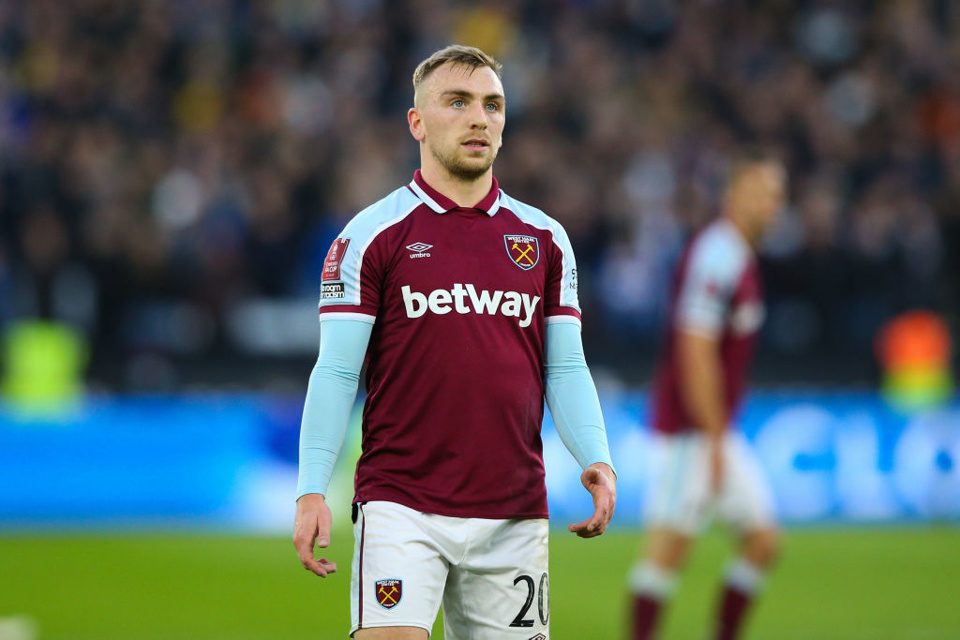 Jarrod Bowen scored and was carded in the same game on five occasions last season in all competitions
By Anthony Eadson
11:00 Saturday 13th August 2022 - 4 minute read

There’s plenty of football on this Sunday with two games in the top-flight being shown as part of Super Sunday on Sky Sports. We’ve tasked @AnthonyEadson to provide us with his best accumulator tips for the afternoon’s proceedings.

This week he’s picked out two bet builder doubles with bet365 which combine for an acca, which at the time of writing pays a whopping 663/1.

Nottingham Forest host West Ham in the first of two Premier League matches on Sunday, with both sides in search of their first points of the campaign, after opening day defeats. Jarrod Bowen is the player I’m focussing on here, kicking the acca off with him to score anytime in the match.

It was a fantastic 2021/2022 season for the former Hull City man with 18 goals in all competitions, 12 of which came in the league. Bowen also recorded more shots on target than any other member of the Hammers squad last term (34), with only five players in the entire division doing so on more occasions. A game against a newly promoted club provides David Moyes’ men with a good opportunity to get that first win on the board and Bowen can get on the scoresheet here as he goes in search of a place in the England squad for the winter World Cup.

It feels like it may have gone under the radar with the current quotes of 9/1 on show for a card on Sunday, but Jarrod Bowen received six bookings in the league last season, with Declan Rice being the only player to pick up more for West Ham. The 25-year-old was also booked in the Europa League and the Carabao Cup last season taking his tally to eight yellows in all competitions. Furthermore, in five of those eight matches that Bowen was booked, he also scored. With that in mind, quotes of 37/1 for the ‘to score & be carded’ double look very generous with bet365.

Following on from Forest vs West Ham is the main game of the day where London rivals Chelsea and Spurs face off at Stamford Bridge. I’m using the same methodology as with Jarrod Bowen here, but this time have honed in on Harry Kane to score and be carded in the game.

Spurs may have failed to score in all four matches they played against Chelsea last season across the Carabao Cup and Premier League, but I’m expecting that not to be the case this weekend. Spurs very much started the season off where they left last season by putting four past Southampton on the opening day. Harry Kane may not have been on the scoresheet that day but looking back to last season, he finished with nine in his last 13 appearances and he will be eager to get off the mark against Chelsea, a club which he has found the net against six times in the past.

I’ll also be backing Kane to pick up a card off referee Anthony Taylor who averaged 3.61 yellows per game last season. This is a fixture which has produced some lively encounters in the last decade and it’s worth noting that Harry Kane has picked up more yellow cards against Chelsea than against any other opponent in his career. All things considered, quotes of 5/1 for a player who made more fouls than any other player for Spurs last season (42), look very appealing, especially considering Kane’s previous disciplinary history against Sunday’s opponents.