Six of the best Maverick Managers in the game today

The Oxford English Dictionary. A maverick. NOUN: An unorthodox or independent-minded person. E.g. ‘he's the maverick of the fashion scene’.

Cheerleading the crème de la crème of football management is a real necessity for all the grief the hardest job in the sport can potentially attract on a weekly basis for a matter of a mere three points.

But it’s not just the trophy-lifters who make the beautiful game attractive. The Sack Race especially thrives on the characters, the curmudgeons, the comedians, the combatants.

So, here’s to the crazy ones. The misfits. The rebels. The troublemaker. The round pegs in square holes...

Leonid Slutsky is the Dancing Queen partial to a bit of Mariah Carey who believes certain Dutch referees have a penchant for exacting the harshest punishments on ‘fat and bald people’.

English football fans got a tantalising taste of the volatile Volgogradian with a six-month, four-win spell with Hull City back in 2017.

We await the latest video of Slutsky’s escapades with greater anticipation than a K-pop fan preparing for a BTS release - check out his current classic in the tweet below.

All We Want For Christmas is for the great Slutsky to be back in England.

Here he is rapping for current club Rubin Kazan 😂

Recently returning to yet another incarnation of Italian side Foggia for, incredibly, his fourth (FOURTH!) spell with the club, Zdenek Zeman is the archetypal underdog who stunned Serie A in his early years with a Foggia team that can be best described as being constructed from a scouting trip to the Island of Misfit Toys.

An advocate of the ‘we’ll win by outscoring at the expense of defence’, Zeman demands that the sport retains its soul. The Czech gaffer has garnered considerable attention with comments made over the doping scandals in Serie A (‘extremely muscular’ he said with a smirk upon the returning Juventus players) and he detests the perpetual commercialisation of football, going on record to say that “this sport is hugely popular not because of big business or pharmacies but because in every corner of the world there is a child having fun with a football.”

A wonderfully popular cult figure with much-needed integrity, Zeman has also inspired songs and even a popular comedy character, and observing his individual style of football will have you praying at the altar of Zemanlandia in no time.

Jesualdo Ferreira is predominantly on this list for one reason.

There is a growing collective of those who have risked the wrath of Jose Mourinho, and in fact come out smiling, ever since The Special One began a downward slide after his last Premier League triumph with Chelsea.

Those who have antagonised the antagonist, shall we say. Bastards Anonymous. Ferreira is the one, however, who can proclaim to have aggrieved Mourinho before it was cool. A real journeyman who has managed all three of Portugal’s terrific triumvirate - Porto, Benfica, and Sporting CP - Ferreira first went tête-à-tête with Moody Mou in the eighties when he was a teacher and Mourinho was a student at Lisbon Superior Institute for Physical Education.

Following his treble-winning success with Porto which led him onto the big stage, Mourinho swiped at his former master, Anakin Skywalker-style:

📹 VIDEO: #AlSadd players honour Jesualdo Ferreira ahead of his last match as coach of the team

Francesco Totti’s bezzie, Luciano Spalletti, finally ended his sabbatical with a return to Serie A with Napoli in May following his dismissal from Inter Milan all the way back in 2019.

A manager partial to greatness, including orchestrating the first Italian team to defeat Real Madrid over two legs in the Champions League back when he was running Roma, and who took Empoli from the doldrums of Serie C1 to the top-flight, Spalletti is a manager many clubs can’t seem to quit, despite the baggage he brings: no less than five clubs have brought him back for a second serving after an initial tenure.

In fact, his longest role was outside of his native Italy, north in Russia with Zenit St. Petersburg.

Described by Jonathan Wilson as ‘the last Italian innovator’, Spalletti’s great football brain refuses to be criticised. “You are a loser”, Spalletti once raged against a probing journalist concerned about his side’s defence, “Everyone knows I’m missing a central defender. Even my mum is aware of that.”

….and speaking of being back.

Aloysius Paulus Maria van Gaal, or Louis to most, has been away from the game for far too long, and so it was with great pleasure this summer that we will hopefully once again see King Louis attempt his best Fosbury Flop upon the touchline, even though it will be with less regularity due to the international stage with the return to the Netherlands set-up.

Van Gaal is a walking soundbite who has almost as many catchphrases as pieces of silverware.

With Louis van Gaal back in management, we're hoping for more moments like this... 😅

Still apparently looking for work today at the ripe old age of 79, Egil Olsen professed that there were only ever two teams he dreamed of managing: the five-time World Cup champions Brazil. And Wimbledon.

The latter he indeed did, in an ill-fated but extremely memorable spell at the end of the nineties, when Olsen - nicknamed ‘Drillo’ - became the first Norwegian manager in the Premier League, around the time Ole Gunnar Solskjaer was heading towards immortality at Camp Nou.

His Dons tenure lasted less than an year, by which end Wimbledon icon Vinnie Jones was regretting ‘not chinning him’ for Olsen’s irritating unconventionality.

As recounted by The Set Pieces, the geography-passionate Olsen is a former communist ‘who knows the height of every country’s highest mountain off the top of his head’, who walks to training because he doesn’t own a car, and scolds strangers who smoke on the street.

Olsen also hit the boundaries of the humanitarian spectrum by managing the national teams of his native Norway (recently ranked the third best country for quality of life) and Iraq (4th worst on the Corruption Perceptions Index…). 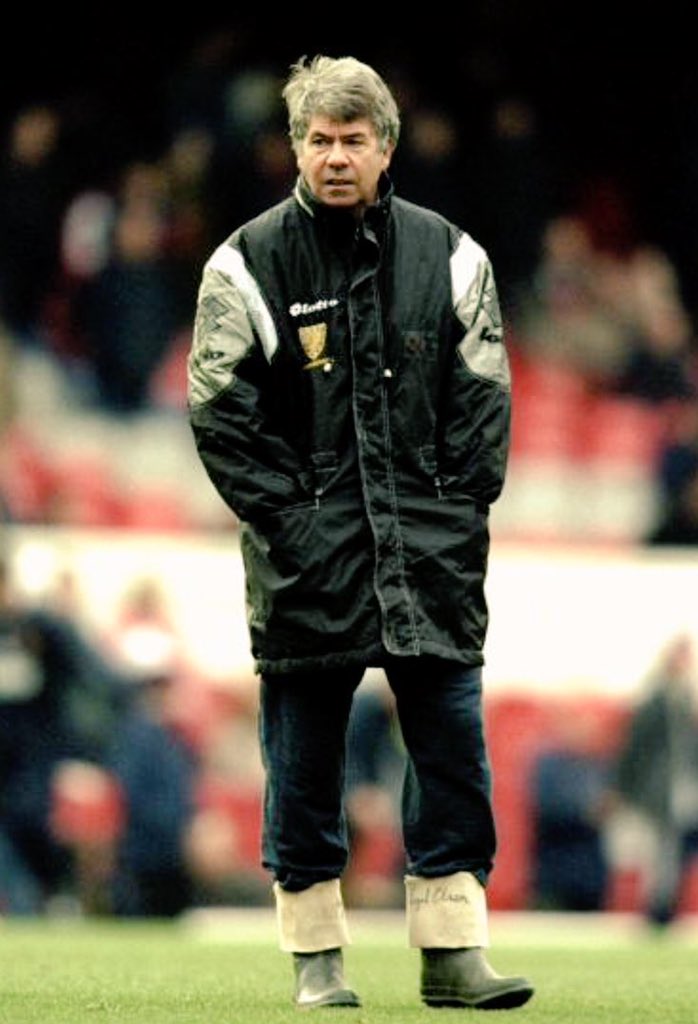 Egil Olsen, the former Wimbledon and Norway manager, was a card-carrying member of the Norwegian Workers' Communist Party and has proudly described himself as a Marxist-Leninist.