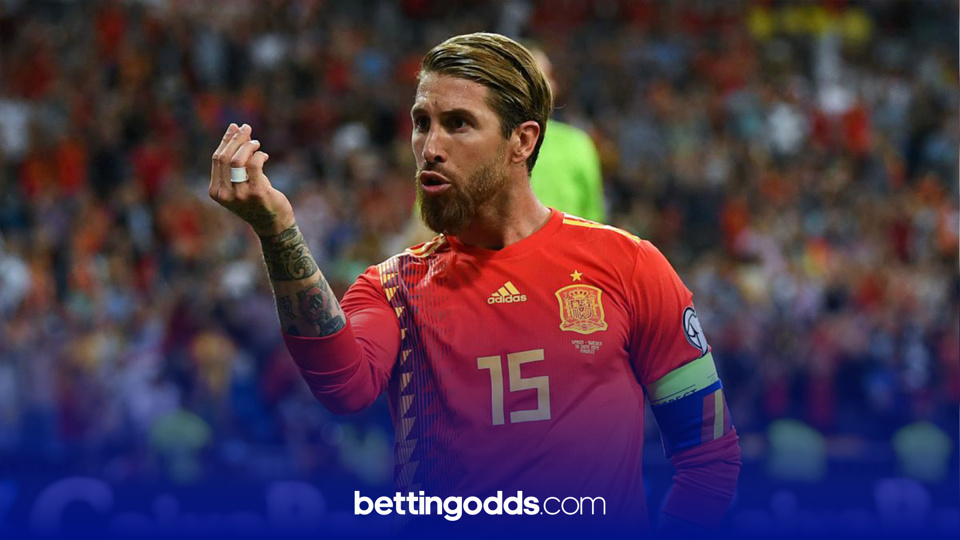 The Premier League takes a short break this weekend which means international football takes centre stage, and while the forthcoming Nations League action is perhaps difficult to get excited about, I’m going to do my best to liven things up by hopefully landing a shots on target winner.

Saturday’s games are pretty dismal overall, though there are two standout ties involving two of the favourites in the Euro 2021 winner betting market - Ukraine v Germany and Spain v Switzerland.

I’ve picked out a shots on target selection for both games and thrown them together in a juicy double which pays just over 11/1 with Paddy Power.

First up is Spain’s talismanic captain Sergio Ramos to register one or more shot(s) on target against Switzerland. The Real Madrid defender is the first name on manager Luis Enrique’s teamsheet, and for good reason.

Having amassed 23 goals in his 173 senior appearances for La Furia Roja, the 34-year-old is the second-highest scoring defender in Spain’s history, and is now just seven shy of equalling Hierro’s record (30 int’l goals).

Interestingly, Ramos ranks highest for shots on target in the Spain squad despite his position in the back-line with an average of 1.5 per game, helped largely by the fact he is on penalty duty and his exemplary ability in the air from corners and set-pieces.

The Los Blancos skipper scored a brace in Spain’s 4-0 victory over Ukraine back in September, taking his goal-tally to 10 in his last 16 international appearances - a truly remarkable record for a defender.

It is worth remembering that Spain are not the team of old, with their attacking force now hugely weaker compared to the side of yesteryear and because of this they have had to adapt their gameplan to a more direct approach at times, one which focuses on supplying Ramos with crosses to latch on to from set-plays.

It is a formula that appears to be working, though, and fills me with confidence when backing Ramos for a shot on target this weekend. As previously touched on, he is such an aerial threat from corners and I can see him testing Switzerland stopper Yann Sommer this weekend.

Ramos is 4/5 for one shot on target this weekend but if you’re feeling a little advantageous, you can get him to register two or more at 4/1 with Paddy Power. I’m sticking with just the one for this weekend’s double, however; don’t let us down Sergio.

Sergio Ramos will go down as one of the greatest goalscoring defenders 👑 https://t.co/2vk2KD1ypA

For the second part of this double we’re heading to Kiev, as Germany take on a Ukraine side who have massively fallen victim to Covid-19 of late.

Andriy Shevchenko is without 14 of his players after the virus tore through his squad, and enter this match-up on the back of a 7-1 thrashing against France on Thursday evening.

Confidence will be low for the Eastern European’s heading into this one and I can envisage another extremely one-sided affair with Germany keen to return to winning ways following two back-to-back 1-1 draws against Spain and Switzerland last month.

There should be plenty of attacking chances for Joachim Low’s side in this one, meaning an array of shots on target opportunities for the team’s more attack-minded players.

Julian Draxler is the one I’m getting behind here after analysing Germany’s recent performances and statistics.

The Paris Saint-Germain playmaker ranks highest in the SOT department for Die Mannschaft with an average of one per game, registering one on target in each of Germany’s previous two games, and I think he could find some joy here against a severely depleted Ukraine outfit who are hugely down on their luck.

We’ve seen just how poor they are defensively having been torn apart by France, so a side with as much quality as Germany should find no issues in creating plenty of chances in the final third.

With Draxler’s recent form in this particular area considered, I like the look of his price of 6/1 to register two or more, while there is also huge value in him to just have one or more at odds-against (6/5) this weekend, so if you’re adding him to a larger bet with more variables then that could also prove to be a profitable selection.

Good luck to anyone who’s on this bet, and please remember to gamble responsibly.

Nations League shots on target double
Sergio Ramos 1+ SOT v Switzerland & Julian Draxler 2+ SOT v Ukraine
11/1
On penalties and always effective from set-pieces. Averages most SOT per game for Spain with 1.5. Draxler averages 2 shots per game for Germany and is the highest rated player for SOT p.g with 1.
Odds correct as of 2020-10-09 13:35 Odds subject to change.
Free bets