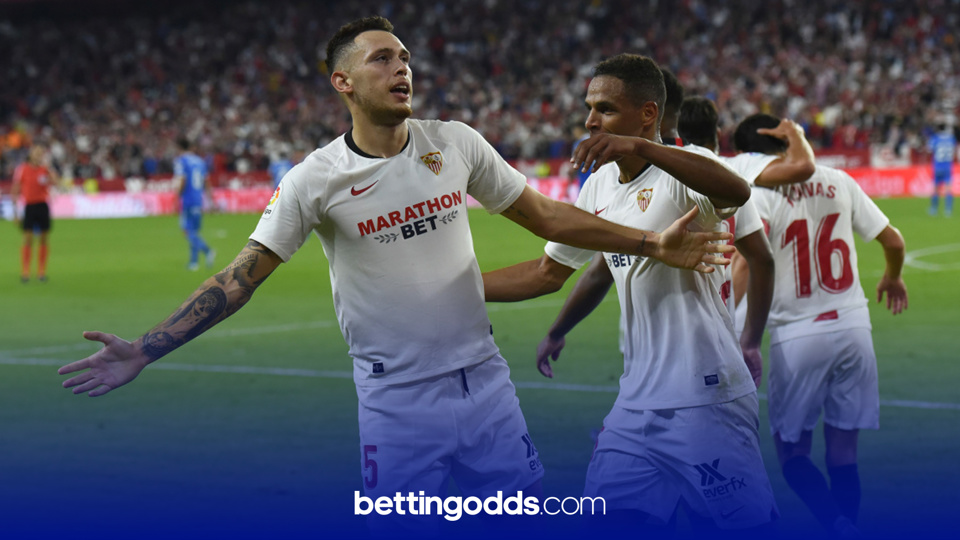 Lucas Ocampos proved to be the match-winner against Wolves in the last round
By Callum Pragnell
16:03 Friday 14th August 2020 - 5 minute read

Sevilla and Manchester United face off for a spot in the final of the Europa League this Sunday, with both sides desperate to taste success in a competition they both have fond memories of in recent years.

Sevilla are the tournament’s most successful side having claimed the trophy five times in their history, while United were crowned the Europa League winner back in 2017, and will be determined to repeat those exploits with another victory this season.

Looking into the outright betting for the match and there is little to separate these two sides according to the odds. United are slight favourites to win in normal time, priced at 6/4 (an implied chance of 40%), while Sevilla are being given a 33% chance of overcoming their English counterparts in 90 minutes with their odds of 2/1. The draw is best-priced at 11/5 with Betfred and William Hill.

In terms of team news, United will be without Phil Jones, Luke Shaw and Axel Tuanzebe as the trio are injured, but aside from that manager Ole Gunnar Solskjaer has a full squad to choose from.

Sevilla by contrast will be without long-term absentee Sebastian Corchia and Nemanja Gudelj, but have no fresh concerns ahead of this bout in Cologne.

Kick-off is 8pm, and the game will be shown live on BT Sport. I have picked out three football tips for the game below, but please always remember to gamble responsibly.

The first of my three bets is Sevilla marksman Lucas Ocampos to score anytime (normal time only). The Argentinian is undoubtedly the key man for the Spaniards here and has the potential to really harm United if they don’t deal with him properly.

Ocampos has netted 17 goals in all competitions for Sevilla this season and turned out to be the match-winner against Wolves in the quarter-final, scoring the only goal of the game as Sevilla edged the West Midlands outfit 1-0.

The 26-year-old is also on penalties for his side, further bolstering his chances of finding the net in this one. I can picture him causing the Red Devils back-line plenty of issues on Sunday, and after tipping him to score against Wolves (thanks again to Ruben Neves for failing to have a shot on target and costing us a 33/1 longshot) I’m feeling confident in Ocampos delivering the goods once more.

This bet is priced up at 2/1 with bet365, so you’d be getting slightly better value for money backing it with Betfair at 9/4.

I can see little separating these two sides in 90 minutes and wouldn’t be surprised to see this game having to be settled in extra-time or by penalties.

United’s previous two Europa League performances since the competition restarted have been far more convincing. A narrow 2-1 win over LASK was followed by an extra-time win over Copenhagen in the last-eight on Monday evening after the game ended 0-0 in normal time, while Sevilla overcame Wolves by the smallest of margins in a 1-0 win on Tuesday night.

With both sides possessing plenty of quality all over the pitch I can see them cancelling each other out during 90 minutes, with breakthroughs at each end of the pitch coming few and far between.

With that said, with the likes of Ocampos, Bruno Fernandes, Anthony Martial and Youssef En Nesyri all in action I can’t see this game ending goalless, so am going to have a nibble on a 1-1 correct score bet, priced at 11/2 with BetVictor (5/1 with most other firms).

For my longshot bet I’ve plucked out an appealing Bet Builder, priced at 40/1 with bet365.

Kicking it off is United’s man of the moment Bruno Fernandes. I’m backing the Portuguese midfielder to score anytime in 90 minutes due to his fantastic stats since arriving at Old Trafford back in January.

Fernandes has averaged 4.5 shots per game in this season’s Europa League and is never afraid of shooting from distance. He is also on penalties and free-kicks which boosts his chances of scoring his 12th goal for United, and was the match-winner for the Red Devils against Copenhagen on Monday evening, scoring a spot-kick in extra-time to secure qualification to the semi-finals. I’ve got everything crossed for a repeat performance against Sevilla.

Doubling this bet up is United full-back Aaron Wan-Bissaka to be booked. The young England prospect is famed for his robust tackling, which at times can land him in hot water with the referee due to the speed and intensity of his challenges.

Wan-Bissaka has seen yellow eight times this season, second only to midfielder Fred who has picked up nine in all competitions, and with so much riding on this fixture I can see him working his way into the referee’s notebook once again.

To round off this three-pronged-punt I’m including under 2.5 goals in 90 minutes. As touched on earlier, I can see this match being a close-knit affair with few chances and goals, with a 1-1 draw feeling like a plausible final score. Therefore, including under 2.5 match goals seems like a good option here, which boosts this Bet Builder massively from 12/1 to 40/1!