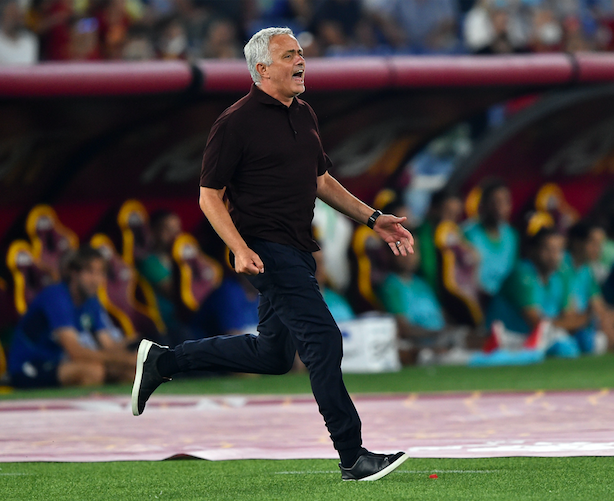 get offer get offer
#Ad. Your bet will be paid out in full if your team is winning by 2 goals at any stage in the match regardless if your selection goes on to draw or lose the game. Applies to all Premier League, La Liga and Bundesliga games. T&C's apply, 18+ begambleaware.org

The new Serie A season starts this weekend and one club we’re looking forward to seeing in action is Roma, who have had a jam-packed summer in the transfer market. Expectations are on the rise in the Italian capital with Jose Mourinho gunning to make an impact domestically following his European exploits last season.

His Roma side kick-off their 2022/23 campaign away to Salernitana, which will be screened live on BT Sport 1 at 7.45pm.

There’s a real buzz around Roma at the moment, so much so that a rare title challenge is even being whispered throughout the historic streets of the famous city. I Giallorossi may have experienced a rather average Serie A 2021/22 season but the club is invigorated after tasting glory in the Europa League Conference.

Paulo Dybala has been lured over on a free - amidst much excitement - Nemanja Matic and Gini Wijnaldum bolster Jose Mourinho’s midfield options, while Tammy Abraham will be looking to build on an impressive debut season in the Eternal City

Mourinho will now be tasked with significantly improving both results and performances domestically, and should he work his managerial magic, a special season could well be on the cards. A return to the Champions League is the main aim, with Roma priced at 11/10 to finish in the top-four.

Sunday’s opponents Salernitana returned to Serie A last summer after a 23-year absence. They had three different managers throughout the campaign, including Davide Nicola who performed a miracle in keeping the club in the top-flight.

They’ve already exited the Coppa Italia this term, losing to second-tier side Parma, and now face a tough task of picking themselves up for a tricky opener at home to Roma. The hosts, who won just three home games last season, can be backed at 6/1 for the three points. Jose Mourinho’s side are the hot 1/2 favourites, with a draw at 15/4.

On paper at least, Roma should be too strong for Salernitana. There's not much value to be had in backing Mourinho's side outright, but I like the sound of 5/2 for Roma to win and both teams to score, which Boylesports have boosted up from 9/4. This bet landed in the April clash between the two sides as Roma left it late in a 2-1 comeback win, bagging both goals in the final 10 minutes.

With Dybala added to their attack, you can expect the capital club to be far more threatening this term as the bid to improve a goal count which stood at a fairly average 59 last season. Dybala, Abraham, Pellegrini and co should all fancy their chances against last season's worst Serie A defence, which leaked in a whopping 78 goals in 38 matches, including six to Roma across the two games.

Salernitana did, however, significantly improve under coach Nicola and found the back of the net in eight of their final nine games; seven of those eight games saw BTTS.

Tammy Abraham opted to venture outside of England last summer for more opportunities, joining the then new boss Mourinho in Rome. We all know that the Portuguese maestro loves a striker, and he's continued to prove that with Abraham under his wing.

The Englishman netted a tasty 27 goals in all competitions last term, while his tally of 17 in the league was only bettered by three players. He'll do doubt be targeting the magic 20 goal milestone and will feel he has a cracking opportunity to get off the mark against Salernitana, who kept just two clean sheets last season.

The 24-year-old scored on his last visit to the Stadio Arechi and can be backed at 6/4 to do so again on Sunday.