Real Madrid vs. Man City Betting Tips: We've studied the data and picked you out a 33/1 bet-builder 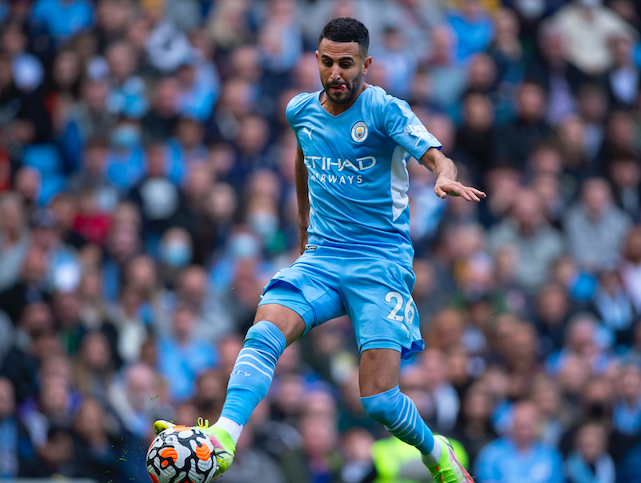 Real Madrid vs. Man City Stats: Riyad Mahrez is City's top scorer and was so close to scoring in the first leg.
By Adam Roberts
16:06 Tuesday 3rd May 2022 - 5 minute read

The Champions League semi-final second legs conclude on Wednesday with Real Madrid versus Manchester City. We will have a full match preview and best bets on the site from our regular tipsters, but we've also asked our statman @OddsT3rrier to take a deep dive into the recent history between the two sides, and look into this season's stats to see if there are any angles which you can use to your betting advantage. He's also selected four picks and combined them into a 33/1 bet-builder for you.

What an unbelievable match it was at the Etihad last week, which has tipped the head-to-head record between the two clubs in City's favour. They now have a record of 3 wins, 2 draws and 2 losses -  the three wins have incidentally come in the last three matches between the two clubs, signifying City's recent dominance in this competition. 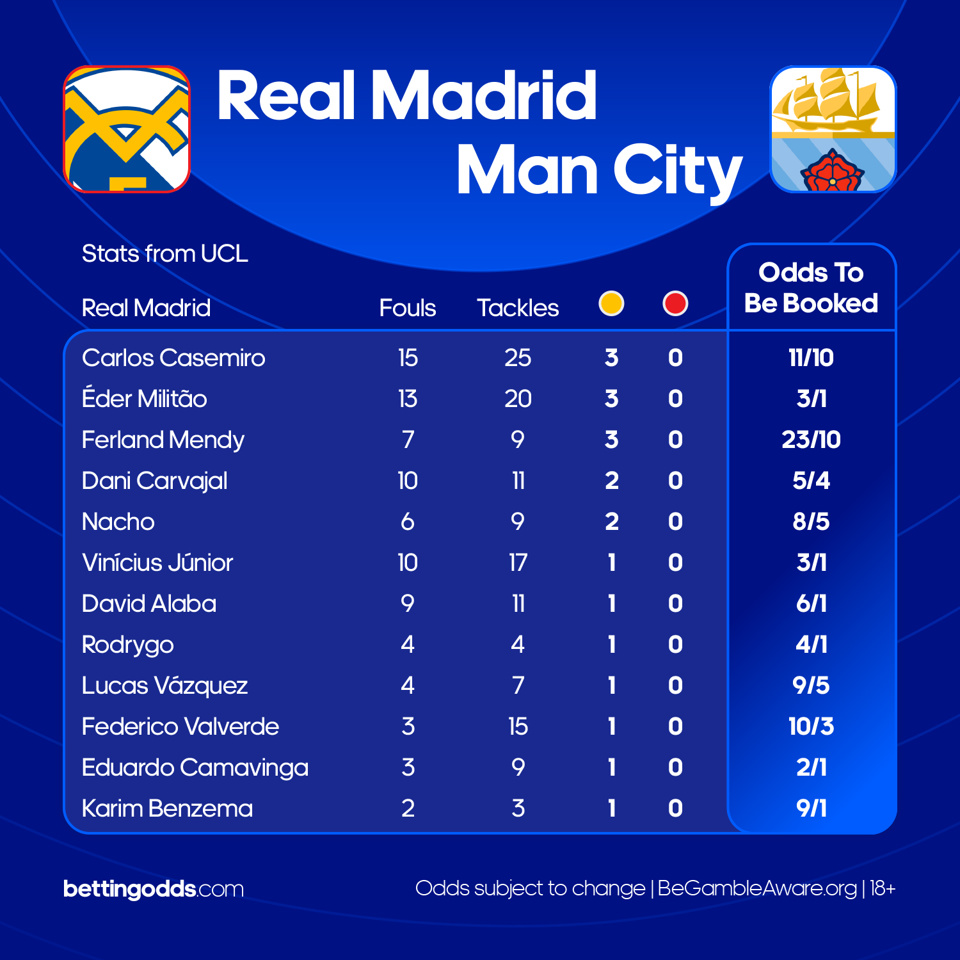 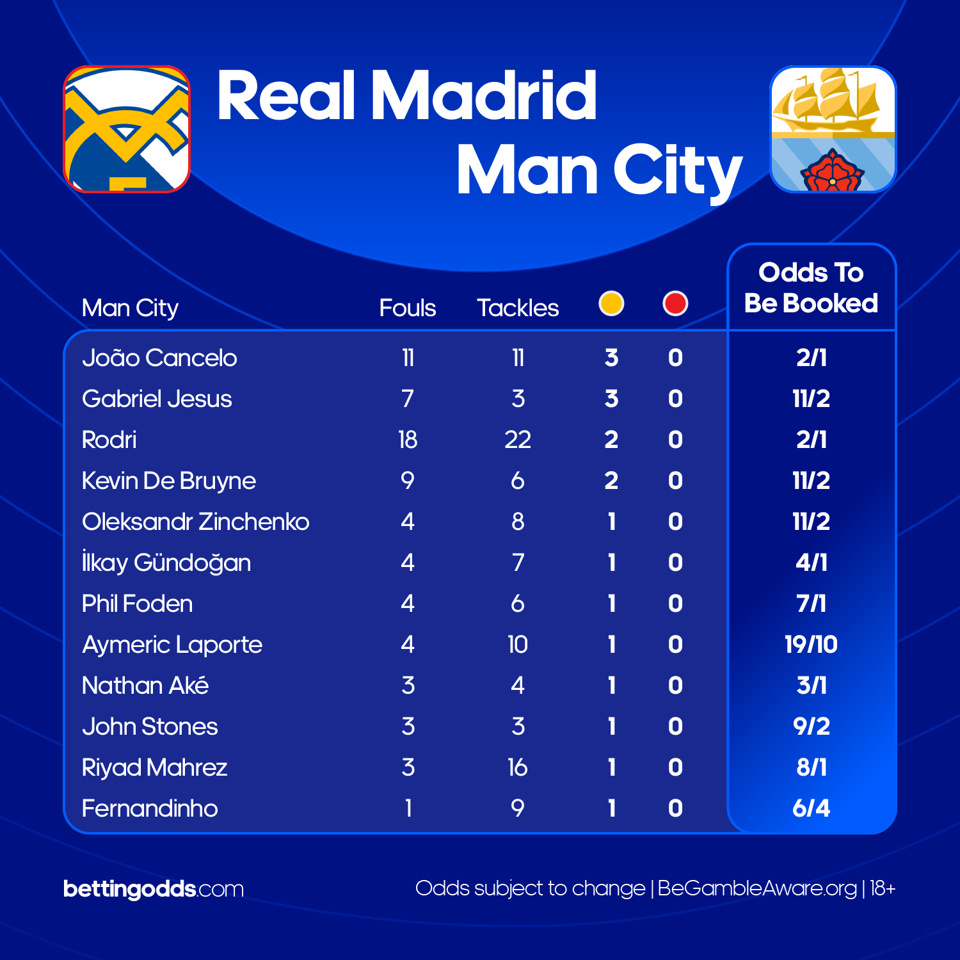 We start our data study with the cards markets and one thing that is immediately obvious is the odds are significantly shorter across the board than in last weeks fixture. I would put that down to a couple of reasons:

Nevertheless, Madrid players are in the main priced lower than their City counterparts. That is unusual for a home team, but they are behind in the tie and will be the more desperate to force the game.

In terms of individuals, two men stand out to me here. Nacho, who will likely be a direct replacement for David Alaba who is rated as extremely unlikely to play due to injury, picked up a booking in the 93rd minute last week and I fancy him to do so again here. He has two already in the Champions League from four starts and five from just 13 starts in La Liga.

For City, Gabriel Jesus stands out again. He is full of confidence after scoring six in his last three games, but is also a decent bet for a yellow card. He puts himself about and is up against Nacho and Militao here who never shirk a challenge. He has three yellow cards in the Champions League and also picked up a recent yellow in the FA Cup Semi Final vs Liverpool. 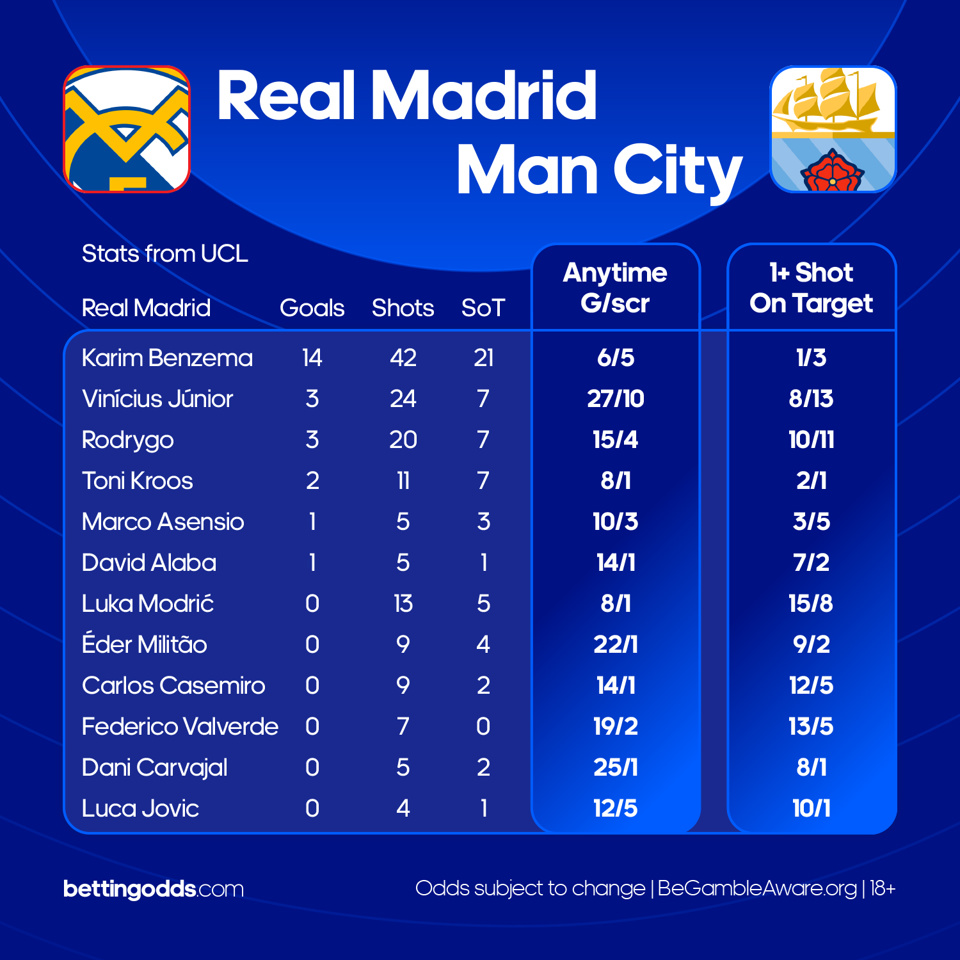 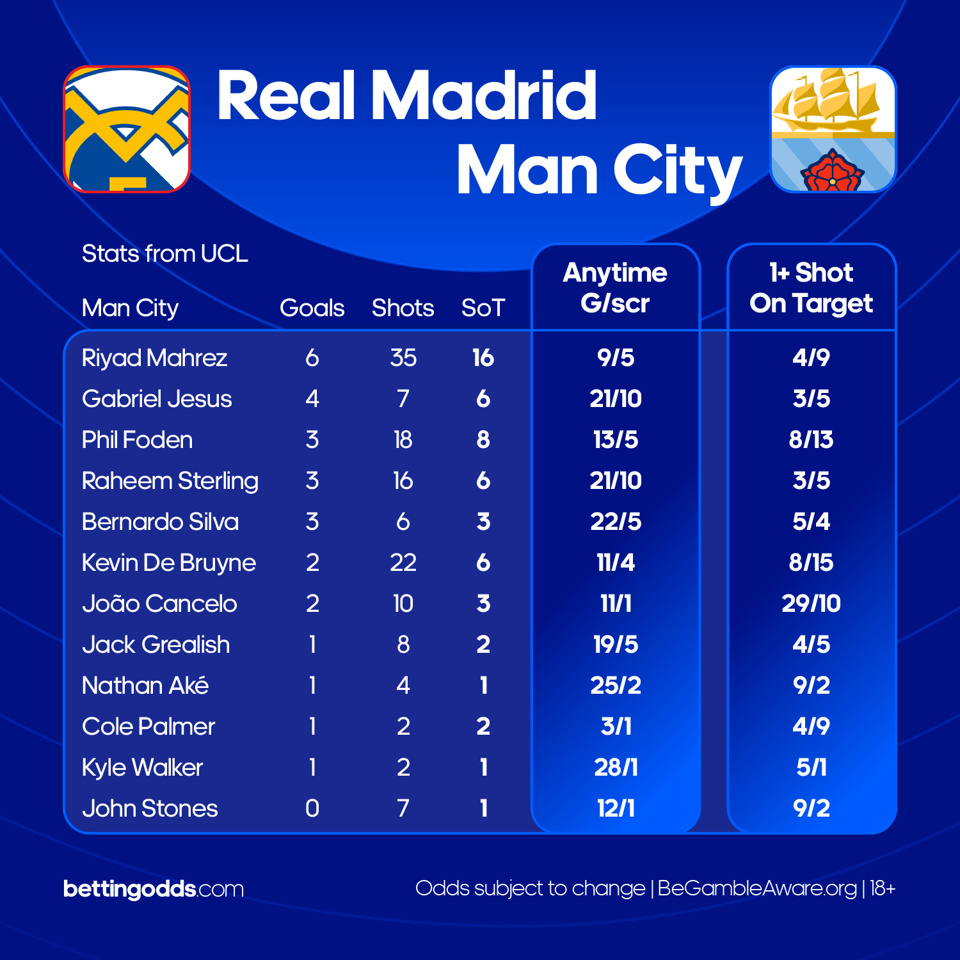 We move into the shots and goals markets and again there appears to be plenty of value on offer. This should be a fun market to bet in if the first leg is anything to go by. Goalscorer and shots on target boosts were raining in after just 20-30 minutes last week and hopefully its the same story here.

Obviously the main man here is Champions League top scorer Karim Benzema who has raced to the top of the charts with nine goals in his last four games in Europe. The 1/3 for a shot on target looks skinny but in the form the 34-year-old Frenchman is in the 6/5 on offer for him to score at Unibet looks on the large side.

City's main man in this competition has been Riyad Mahrez who leads the side in goals, shots and shots on target and he was extremely unlucky not to register a shot on target last week  - he had three shots, two just missed and the other hit the post. He's 4/9 at BetVictor for one this Wednesday.

I've combined the four selections above, which pays a whopping 33/1 with bet365's bet-builder algorithm, compared to a paltry 18/1 for the same selections at William Hill. Bet365 are giving out a free £5 to new and existing customers for this game so this could be a great selection for that.

Good luck and enjoy the game!

Nacho & Jesus to be booked, Mahrez 1+ Shot on target and Benzema to score
33/1
Odds correct as of 2022-05-03 15:50 Odds subject to change.
Opt-in
Sign up for market leading stats and exclusive expert picks delivered to your inbox from next season
Click to sign up to receive tips
By clicking opt-in you agree to our privacy policy and terms and conditions below
Opt-in
Your Details
Complete your details below to enter:
Full Name
Email
SUBMIT
Please fill in both your name and email
Opt-in
SUCCESS!
Thank you for your submission.