Who will win the 21/22 Premier League season according to bets placed?

The Premier League trophy that teams will be fighting for in the 21/22 season
By Steven McQuillan
15:14 Wednesday 28th July 2021 - 8 minute read

The 21/22 Premier League season is sure to be an absolute banger, with the top four in the market arguably all having just as good a chance as the other. Man City being one of the best teams in the world, Liverpool getting Van Dijk back in their team, Man Utd having a solid transfer window, and Chelsea winning the Champions League. Punters aren’t sure where to put their money with this highly competitive field but Ladbrokes have provided a breakdown into where the money is going.

We’ll start with the most backed team according to the bookies. Man Utd have had a tremendous summer transfer window so far securing the signatures of Jadon Sancho and Raphael Varane. These two signings have seen them top the list as the most backed team in the Premier League outright market with a whopping 26.1% of punters backing them to win the top-flight for the first time since the 12/13 season.

United showed brief spells of brilliance last season where they spent a very small amount of time at the top of the table thanks to some heroics from Bruno Fernandes, punters will be hoping that the new attacking and defensive options only make their claim to the title even stronger. Man Utd see themselves as the fourth favourites in the market at around 7/1 which could be the reason they’re getting such a large amount of bets, in terms of value, you’d think with that squad it’s definitely there! 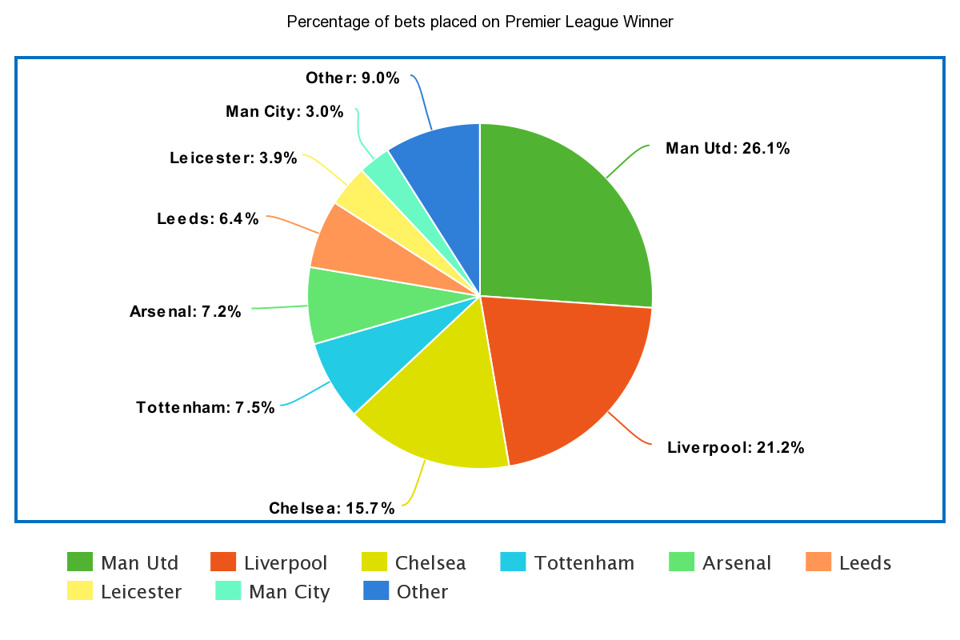 Liverpool were absolutely dominant in the league in the 19/20 season winning the league by 18 points and finishing a staggering 33 points ahead of Man Utd in third place. The Virgil van Dijk effect was in full swing this season as they only went on to lose three games this season. Van Dijk was injured at the start of the next season and that’s where it all went downhill for Liverpool. They lost nine games in the next season without the big man at the back proving just how important he is to the squad.

The Dutch international will be back this season which is giving Liverpool fans a lot of hope heading into the new season; he didn’t go to the Euros so that he could focus on the upcoming season with Liverpool. The bookmakers have them priced as the 5/1 second favourites to win the Premier League and if Van Dijk proves how good he is again, the 21.2% of punters that have backed them will be buzzing.

I’m a bit surprised they aren’t higher up in this list to be honest. Thomas Tuchel has transformed Chelsea into one of the best teams in the world and he proved that by winning the Champions League without a problem. Since taking over he’s managed 16 games in the Premier League and taken 35 points from those games, that’s an average of 2.19 points per game which is just shy of Guardiola’s record of 2.34 points per game. Many Chelsea fans are a bit disappointed at the lack of transfer business the club has had this summer but with the squad they already have, I’m not sure much else is needed in that team.

Kai Havertz had a solid Euros campaign where he finished as Germany’s top scorer and had a fair few solid showings for the national team. Chelsea are third favourites in the outright market at around 6/1 and that might be tempting a few people to whacking a few quid on. If Tuchel can carry over the performances from last season, they’re going to be tough to beat.

Not entirely sure what’s going on here to be honest. Spurs have somehow taken 7.5% of the total bets in the market for the outright betting in the Premier League and I can’t tell you why. Under Jose Mourinho they had a decent spell at the start of last season with Harry Kane and Son Heung-Min turning into the most deadly duo in world football, but they quickly fizzled away and they ended up finishing 7th in the table.

One thing they do have going for them is a new manager in Nuno Espirito Santo who many Spurs fans hope will inject some new life into the club. Son is now tied down to a new deal and the next thing they need to do is keep Harry Kane at all costs if they want to be serious about competing for the league title. I’m still not sure why they’re such a popular bet but keeping Harry Kane and having a new manager might give the club something they needed.

Another one that is a bit confusing. 7.2% of punters are fancying Arsenal for Premier League glory next season. Arsenal finished just behind Spurs last season in the league at 8th position and the only reason I can think of people putting their money on them is their proposed transfers. Arsenal have already made two signings this season in Lokonga and Travares, two 21 year old signings in the centre midfield and left-back spots. However, they are also heavily linked with signing Ramsdale, White, and Maddison.

The addition of Ben White in my opinion would massively help any Premier League club as he’s proved himself to be one of the more solid defensive options in the league and Aaron Ramsdale could prove to be a solid young keeper to add to their squad. The best signing for me would be James Maddison from Leicester who Arsenal are currently odds on to sign. Arsenal have really lacked a creative outlet recently and that was proved when Odegaard went to Arsenal and became one of their best players, if they can get Maddison into their squad, who knows what the likes of Aubameyang could do.

Leeds were always going to be a popular bet coming into the new season just because of how big their following is. Even when they first came back into the Premier League, Leeds were still shorter priced than they should be to win the league thanks to their fans. Leeds last season proved that they aren’t just in the Premier League to make up the numbers. They managed to claim points off Man City, Man Utd, Chelsea, Spurs, Liverpool and Arsenal.

To say they took points off the whole big six is an incredible achievement and if they can put up more consistent performances like them, they could see themselves finishing even higher in the league. Winning the league might be a bit of a stretch but if you do fancy that, you can get 100/1 for them to win the league.

Since their incredible 15/16 season Leicester have well and truly established themselves as one of the best teams in the Premier League. If we weren’t to go off the historical value of the Premier Leagues ‘Big Six’ then you’d have to say they deserve a spot in the top six Premier League teams. The 5000/1 season was truly incredible and because of that they are often a popular bet in the Premier League. However, you won’t be getting 5000/1 for this team anymore, they’re actually the 6th favourite to win the league at 50/1 this season.

Jamie Vardy is getting on a bit now and while he can still definitely do a job in the Premier League, his numbers last season were a bit disappointing especially if you take away his penalty goals. It feels like Leicester are looking for a Vardy replacement in Patson Daka. Their new signing is another pacey forward with a prolific goal scoring record for RB Salzburg. In the Bundesliga last season he scored 27 goals in 28 games and assisted 7 times, an absolutely phenomenal record and if he translates any of that over to the league, they could cause a serious problem in the league.

Man City are looking like the most dominant force in the world of football at the moment. With Ruben Dias joining their squad they’ve been absolutely incredible. Last season they won the Premier League with ease after a stunning second half of the season where they went on a 19 game unbeaten streak. They made it all the way to the final of the Champions League but they still seem to be cursed in that competition and fell just short of glory as Chelsea claimed the spoils.

I feel the main reason that they are not so high in this list is because of the price they represent. Man City are priced at 4/6 with most bookmakers to win the league and it honestly isn’t very attractive for such a competitive league. Now we could go on all day about how good of a team they have and how good of a manager Pep Guardiola is, but most people don’t fancy betting on a Premier League winner at 4/6 and I don’t blame them really. This edition of the Premier League on paper looks like one of the most competitive ones so far and we could very well see City upset. Of course, there’s a reason why they’re so short in the betting, but only time will tell!