Premier League Card Betting: Mike Dean's record in charge of big games should see a flurry of cards this weekend

International football is done and dusted until March and the Premier League returns this weekend, praise the lord. The standout fixture is undoubtedly Tottenham v Man City on Saturday at 5:30pm and the man in the middle for that game will be none other than Mike Dean, the celebrity-standard referee who loves the big occasion.

I've done a little bit of digging and delved into the Liverpudlian's statistics from recent big game meetings to show what we can possibly expect from Dean this weekend. With two sides with plenty of history both battling it out for the title, there should be plenty of talking points and, more importantly, plenty of cards distributed... 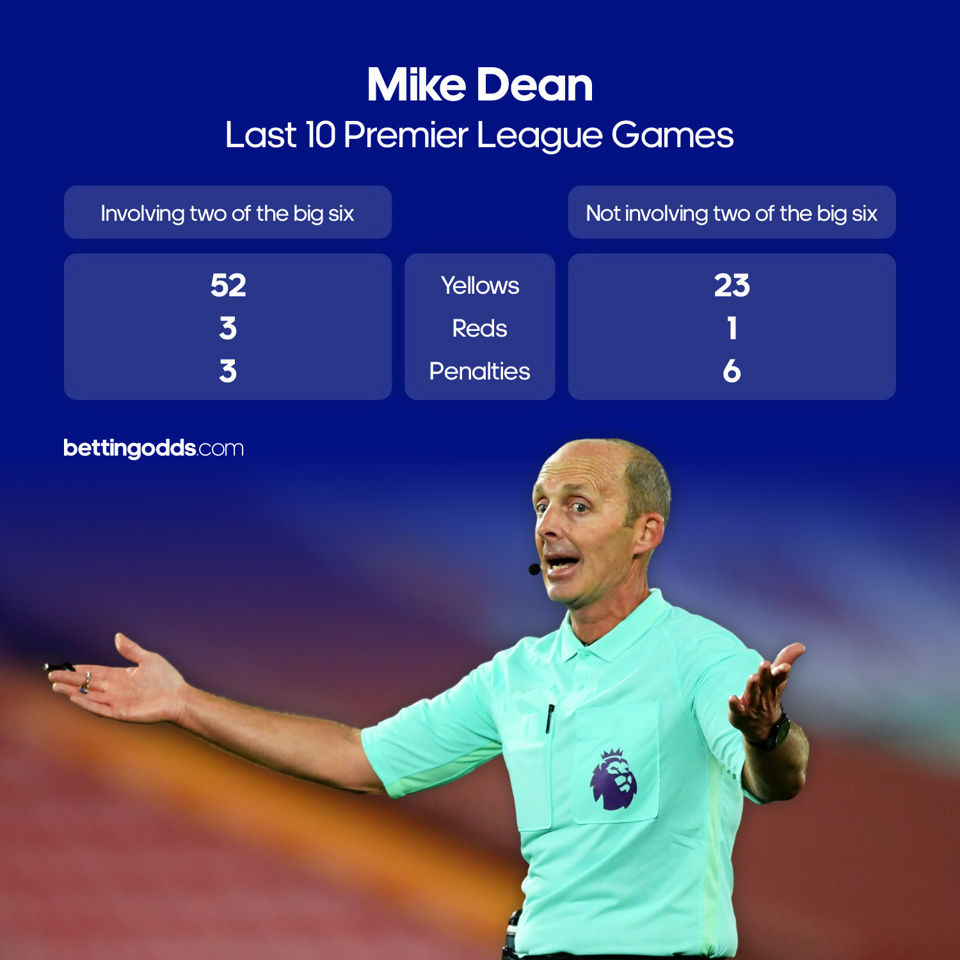 It's clear that Mike Dean thrives in big games. His persona and arrogance is perfectly matched to the biggest fixtures where the biggest teams feature and this weekend there is no bigger tie than Spurs v City, live on TV.

The two teams are genuine title-rivals at this stage of the campaign and there is still plenty of bad blood from that fateful clash in the semi-final of the 2018-19 Champions League.

Mourinho v Pep is another huge angle in this one, the two have a respectful yet intense rivalry with each other and tempers could easily boil over in north London which would only cater to Mike Dean's continuous need to be embroiled in the middle of the action.

Just sit back and enjoy some peak Dean 🤣 https://t.co/PduKxvapC9

Dean's track record speaks for itself

The last high profile match Dean took charge of was Man Utd v Arsenal at the start of November and in that game he gave out six yellow cards and a penalty.

Before that, it was the Manchester derby back in March where he again dished out six yellows. Interestingly, he was the man in charge when these two sides met back in February, again brandishing six yellow cards, one red and another penalty!

The 52-year-old has averaged 5.2 yellows and 0.7 penalties per game during the last 10 PL games featuring two of the 'big six' he's officiated, and this season he has given out 17 yellow cards and one red in just six appearances overall.

City have been on the receiving end of most of Dean's career bookings - 92, second only to United players he has booked (94) - and should this trend continue then the Sky Blues could be in for an onslaught of yellows on Saturday evening. 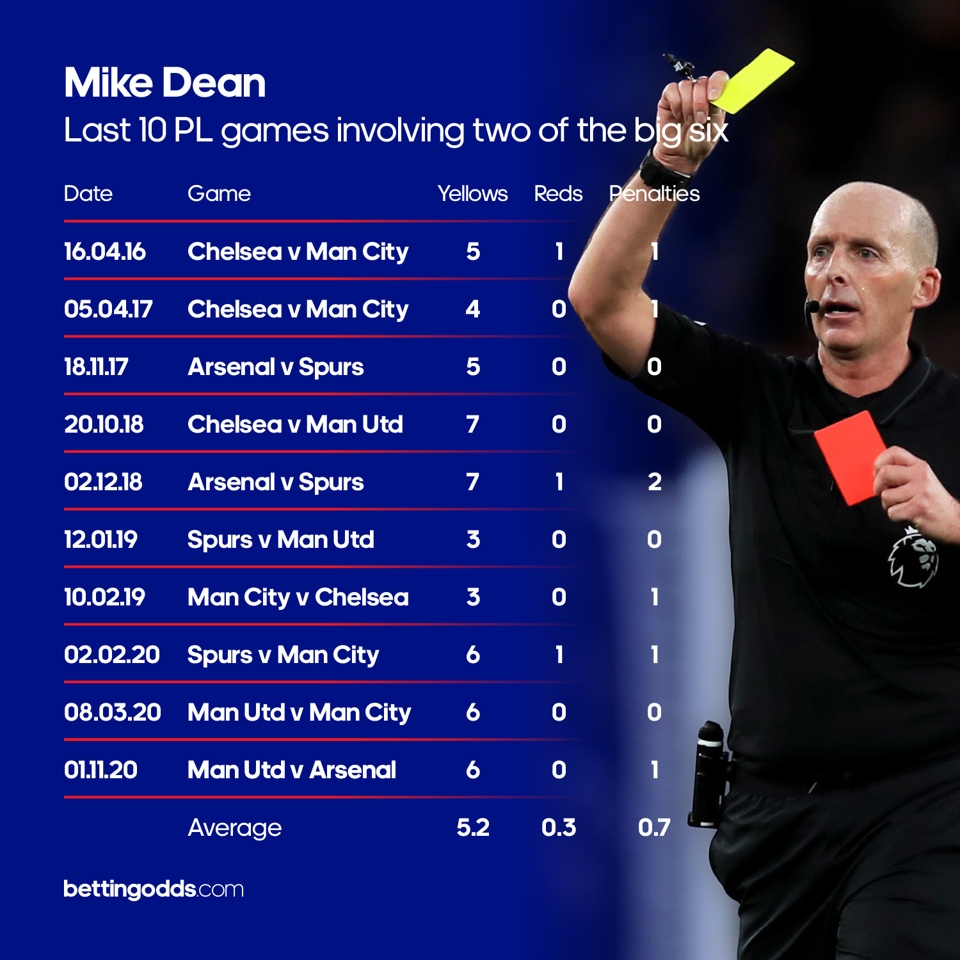 Who's usually good for a card?

Tottenham have been pretty well behaved this season, picking up only eight bookings but Mourinho will have his troops fired up for a game of this magnitude so I firmly expect to see strong challenges and shithousery aplenty in this one, especially with the match official considered.

Despite them escaping caution, the north London side do rank fourth for fouls in the top-flight, they just seem to get away with it more often than not. With Mike Dean at the helm, however, this is something I can see being picked up on which could well result in the hosts adding to their card tally for the season.

City have picked up 12 yellows so far but have played one game less than Spurs and have a number of players who frequently see their names jotted into the black book. The likes of Rodri in the heart of midfield is usually good for a card and he has picked up two yellows in seven appearances this time out, while Tottenham's Tanguy Ndombele has the same amount to his name and is another who is not afraid to put a foot in when the going gets tough.

Full-back Serge Aurier has only made two league appearances in 2020-21 and has escaped a booking so far, but interestingly has averaged 2 fouls per game in those two outings which makes him Spurs' highest offender in this particular field.

With Matt Doherty self-isolating after testing positive for coronavirus, it's most likely that the Ivorian will line-up at right-back against City directly up against the pace of Raheem Sterling should he be fit enough to feature, so he could be a worthwhile consideration for your bet this weekend (21/10 for a yellow) given his track record of rash challenges and cards (nine yellows since signing for Spurs in 2017).

Summer signing Pierre-Emile Højbjerg has settled in really well at Tottenham but the Danish midfielder is prone to a rash challenge and frequently finds his name taken. The ex-Southampton man has three bookings for club and country this time out and will be looking to break up play this Saturday, marking the best player on the pitch in Kevin De Bruyne, so it wouldn't be too surprising to see him awarded another yellow here.

City's Kyle Walker has been booked twice in his last three games for club and country and will be faced with the prospect of marking Tottenham's in-form wide man Son Heung-min - a hugely difficult task given how tricky the South Korean can be. The England international is 5/2 to pick up a booking in this match-up and alongside Højbjerg - who is 13/5 for a yellow - this makes for a tasty 16/1 double.

With all things considered we should be treated to an explosive game packed full of intensity this weekend, between two sides who will be desperate to get one over on each other. Mike Dean will do what Mike Dean always does and ensure that the spotlight is firmly shining on him at all times - so buckle up, do your research and get your Same Game Multis planned out because you really don't want to miss this one.

BettingOdds.com's tip is Højbjerg and Walker both to be booked and you can add that directly to your bet-slip by clicking the price in the bet block below. Good luck if you do decide to follow our tip and please always remember to gamble responsibly.