Premier League Betting: Are Newcastle a good price to be relegated?

It's been a rough few weeks for Steve Bruce and Newcastle with just one goal scored in their last eight games in all competitions
By Anthony Eadson
15:19 Monday 25th January 2021 - 5 minute read

Saturday’s 2-0 defeat to Aston Villa was the seventh time in Newcastle’s last eight games in which the Magpies have failed to get on the scoresheet. It was another dull and uninspiring performance at Villa Park and with half of the season now complete we’ve looked at whether Steve Bruce’s side could well be heading for the drop.

Newcastle are priced at just 2/1 with bet365 in the Premier League relegation market with only Fulham (8/11), West Brom (1/5) and Sheffield United (1/25) shorter in the betting

You have to go back eight Premier League games to December 12th for the last time that Newcastle took three points, in a 2-1 victory over West Brom at St James’ Park. Since then Steve Bruce’s team have scored just one league goal and the lack of creativity and with the lack of quality shown over recent weeks, Newcastle are now just seven points above the relegation zone in 16th place.

Those who watched Newcastle’s defeat against Villa will have seen quite how toothless the away side were, particularly in the second half where they never really looked like scoring. Prior to Saturday’s fixture Newcastle had been beaten 3-0 at Arsenal, where they had amassed 0.19xG. Before that, it was a defeat for the Toon away at bottom side Sheffield United, who going into that game had collected just two points all season.

When it comes to shooting stats this season, Newcastle rank 19th for average shots per game. Only West Brom rank lower than the Magpies who with a glum looking 8.5 per game on average. Compare that to the likes of Aston Villa, who rank third with 15.5 per game, and Leeds who rank 4th with 14.8, and you can see how the attempts have really dried up for Newcastle this campaign.

Keeping control of the ball has been another large issue for this Newcastle side this season. Having a look at the possession stats in this season’s Premier League campaign, no other team is recording less possession per game on average than the Magpies with a measly 41.2%.

This was evident at times against Aston Villa, especially in the second half where the visitors seemed to have forgotten how to put pressure on opposition players. For a team who were 2-0 down and in much need of picking up points or at least scoring a goal, it was a really poor showing.

Improvement of others around them

Burnley’s shock 1-0 victory over Liverpool last week was the fourth time since December 13th that a side in the bottom five of the table has taken points off the Premier League champions. Several sides towards the lower end of the league have been performing much better of late, starting with the Clarets.

The historic win at Anfield, which ended Liverpool’s 68 game unbeaten run in the league, will go down in folklore in the backstreets of Burnley. Sean Dyche’s side have now taken 14 points from their last nine league games, in contrast to taking just five points from the previous nine fixtures. With a new owner at the helm and the possibility of a couple of new signings coming in at the end of the transfer window, I expect Burnley to lengthen away from the drop zone with relative ease during the second half of the season.

Fulham are another team who have been putting in a much better standard of performance in the second quarter of the season in contrast to the first. Prior to defeat against Chelsea ten days ago - where a sending off just before half time cost them the game - the Cottagers had avoided defeat in five consecutive games. That includes games they fought out a hard-earnt point against Tottenham, Liverpool and Southampton and even though they still sit five points from safety with a game in hand, it would not be a surprise to see the west London side continue to pick up points and remain in the top-flight next term. 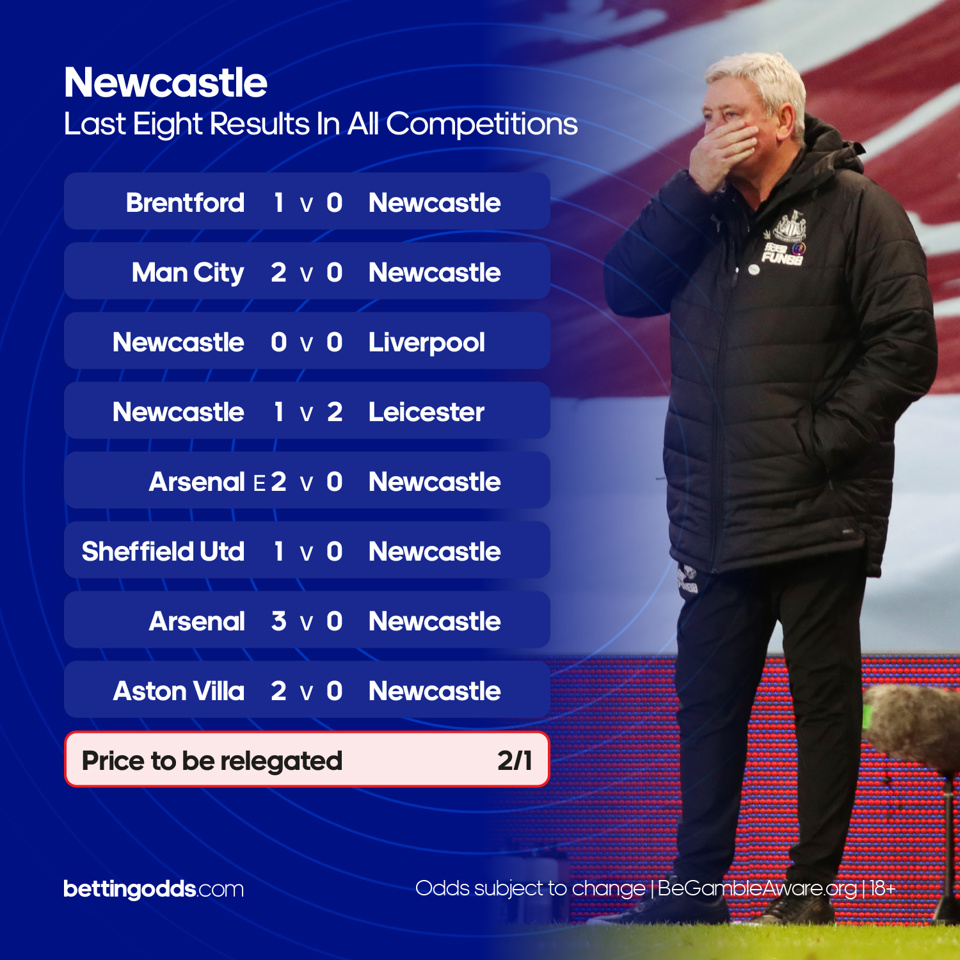 So as mentioned above, we have just three sides shorter in the betting than Newcastle at 2/1 to be relegated. I think Sheffield United (1/25) are ultimately doomed and even with Big Sam in charge I can't see West Brom (1/5) avoiding the drop in this highly competitive league.

Brighton (5/1) have not won at home in the league for over a year now. Their home form is a real cause for concern but their high volume of chances created should be enough to keep them up in my opinion.

At 2/1 Newcastle look the prime candidates to join Sheffield United and West Brom in the Championship. The distinct lack of goals and possession is a real cause for concern. The Magpies face Leeds at St James’ Park on Tuesday evening in what is a huge game. The away side are priced at just 10/11 for the win, which gives a sense of quite how bad Newcastle have been lately.