After sixteen years away from the Premier League, Leeds United are back. Under the guidance of Marcelo Bielsa, the West-Yorkshire club have received plenty of plaudits so far this term for their attacking play which has caused plenty of teams a headache.

Games featuring Leeds this season have been particularly enjoyable to watch due to the high amount of shots taken, which often follows with the narrative of an end-to-end encounter. @AnthonyEadson takes a look at the areas where Leeds have proved effective so far this campaign.

I expected Everton v Leeds to be an extremely entertaining affair on Saturday and it certainly didn’t disappoint, even if there was only one solitary goal. 50% of Leeds matches this season have seen at least five goals and Bielsa’s side are fast becoming known for their ability to take the game to their opponents, whoever that should be.

Leeds have become a lot tighter at the back over the last couple of weeks, keeping clean sheets against Arsenal and Everton after conceding eight in the two games prior against Crystal Palace and Leicester. Going forward this term, Leeds have been relentless. When it comes to chances created this season, Leeds rank first in the Premier League with 116 from their first 10 games.

Yes, there are sides in that table below them who have played fewer games so far this season, but regardless of that, for a newly promoted team to rank first for chances created after a quarter of the season, is an impressive feat.

It’s a similar story with Leeds when it comes to shots taken in the Premier League with the Whites ranking third for shots per game with 15.3 on average. Only Liverpool (16.3) and Manchester City (16.0) rank higher this season for that metric with Bielsa’s boys flocking forward at every opportunity.

Over recent games, Leeds have flooded the right-hand side of pitch with Luke Ayling attacking when possible down the wing. The ability to get bodies in the final third of the pitch has allowed Leeds to average 5.4 shots on target per game, which is again the third highest in the league this season along with Chelsea and Manchester City who have the same figure. 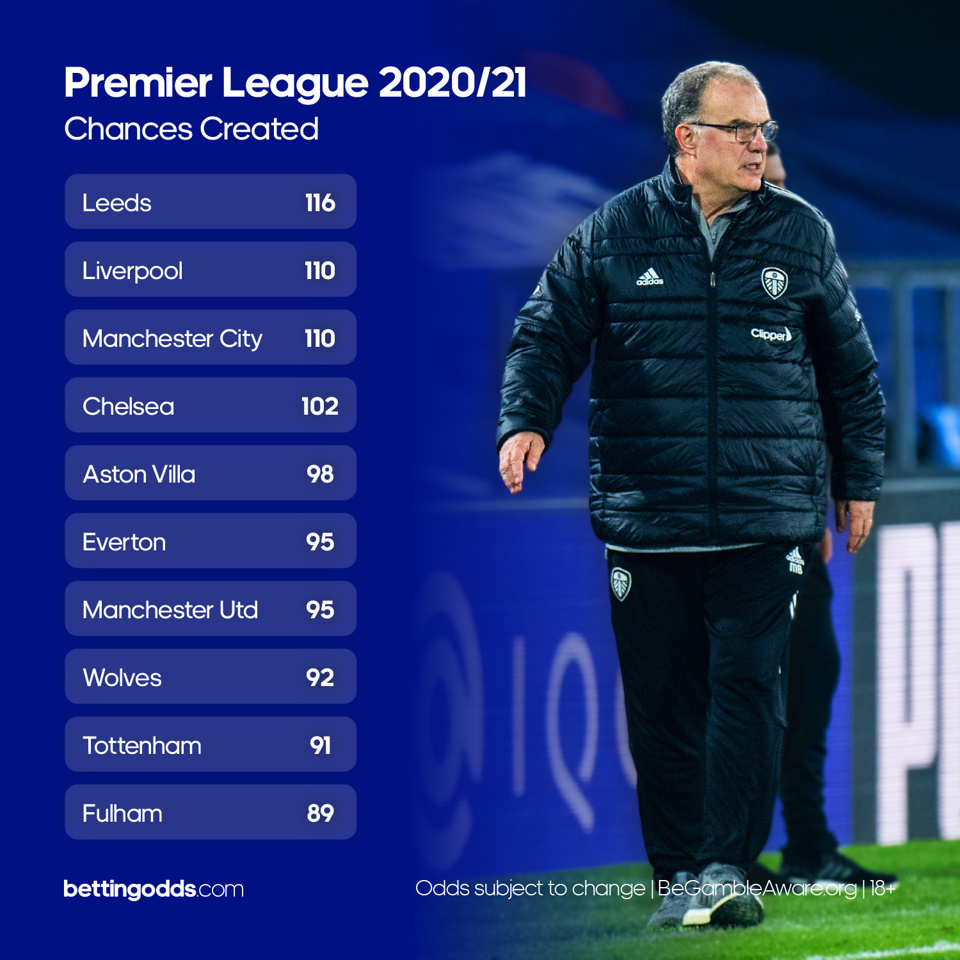 At the time of writing, Leeds currently sit 12th in the league table, however if we look at the table for xG (expected goals scored) this season, Leeds actually sit third. Their figure of 18.0 xG so far this term is only bettered by that of Tottenham (18.1) and Liverpool (23.1), who sit first and second in the table.

This shows that Marcelo Bielsa’s side are creating a large amount of good chances this season based on the volume and difficulty of their attempts so far. If you want to read more about the xG metric you can do so in our beginners guide to expected goals here.

Having a look at the games featuring the most shots this season in the Premier League and Leeds feature in four of the top six!

The numbers shown by Leeds this season in front of goal can not be ignored. Ranking third for shots on target per game, opens the window of opportunity in betting on Leeds to have over a certain amount of shots on target.

For example, Aston Villa average 5.8 shots on target per game this season. They are 7/5 (2.4) to have five or more shots on target against West Ham on Monday. Aston Villa have won all three of their away matches in the Premier league so far this term and with bet365 going 1/1 (2.0) on the same selection there’s definitely a potential case to be made for a play here.

Another potential angle around Leeds performance could be to look in the player shots markets, with a particular focus on Patrick Bamford. The 27-year-old forward ranks 1st for shots per game this season with 4.0 on average.

Bamford has also registered at least one shot on target in all ten of his Premier League games this season! That selection of Bamford to have one or more shots on target may now be a short price with most firms however it could be one to include in your Same Game Multi. Two plus shots on target has also landed in 50% of Bamford’s matches this season with the striker making plenty of appeal in these areas.

As I mentioned 50% of Leeds’ league games have seen over 4.5 goals this season, however I would approach backing the high scoring affairs on future occasions with caution. The return of Kalvin Phillips in front of the defence has helped the team earn back-to-back clean sheets, and staying tight at the back will be key for how high up the table Leeds can finish.