Premier League Betting: City the 11/10 favourites but is the market overlooking Liverpool

Man City 11/10 favourites but is the market overlooking Liverpool?

The hectic festive schedule in the Premier League draws to a close on Monday evening, with an eight day break until Gameweek 18 commences on January 12th. With just seven points separating the top ten teams in the table, it’s been one of the most interesting and tightest starts to a Premier League campaign in history, with plenty of the top teams dropping points.

After three wins from three over Christmas and New Year, Manchester City are now the 11/10 favourites with the bookmakers to win the most coveted prize in English football, with an implied 48% probability of lifting their third league title under Pep Guardiola. We’ve taken a look at the winner market and analysed the three teams at the head of the betting.

After winning just three of their opening eight league fixtures, things are starting to look brighter for Manchester City. The Sky Blues have put together an unbeaten seven-game run, whilst keeping five clean sheets. The return to form of John Stones at the back has steadied the ship, along with the defensive duo of Ruben Dias and Joao Cancelo who have impressed during this campaign.

City’s sturdy defence have conceded fewer goals than any other side this season, leaking 13 over their 15 games so far. When it comes to xG, Pep’s side have the lowest expected goals against (xGA) figure with 14.5, whilst their expected goals difference (xGD) is also the biggest at 14.8.

This leads us nicely to City’s main issue this season, which surprisingly has been scoring goals. Their expected goals figure (xG) of 29.3 is ranks sixth in the league, with Leeds, Liverpool, Manchester United, Aston Villa, and Chelsea all having amassed more. Last season's Champions Liverpool, have scored 13 goals more than their northern rivals this term and the Mancuians have not been helped by the injuries to both Sergio Aguero and Gabriel Jesus.

Kun Aguero will forever be a legend in Manchester, but his ongoing injury issues have left him lacking fitness after surgery in the summer. Gabriel Jesus has been in and out of the team so far this campaign, with Pep Guardiola trying various tactical systems including playing Kevin De Bruyne as a false-nine in the 3-1 win over Chelsea on Sunday. The lack of striking firepower has led to rumours of Harry Kane making the switch to Manchester in the Summer and the opportunity for potential silverware must surely be at the back of the Tottenham captain’s mind.

City have struggled to break down teams who sit deep this season and have dropped points at home to West Brom, as well as a humiliating 5-2 defeat against Leicester at the Etihad. At 11/10 I would not be rushing to back Manchester City to lift their fifth Premier League title in this most unpredictable and unprecedented of seasons.

Jurgen Klopp’s side have the chance to put a three point gap between themselves and second placed Manchester United as they travel to Southampton on Monday evening. Neither side is in the most inspired form with just three wins between them from their last ten matches.

Liverpool topped the pile on Christmas day, becoming the first team to do so on three consecutive occasions in the Premier League. Their only defeat so far this season came against Aston Villa in one of the greatest games in Premier League history where last season's relegation candidates spanked the champions 7-2 at Villa Park.

It’s been an injury-riddled campaign for the Reds with new signing Thiago Alcantara starting just one of the first 17 matches. The biggest blow though came in the Merseyside derby, where captain Virgil Van Dijk ruptured his ACL after a reckless challenge from Jordan Pickford. Diogo Jota, Joe Gomez and Joel Matip are all currently sidelined with the manager showing he can rely on some of his younger crop in Rhys Williams, Curtis Jones and Nathaniel Phillips who have all given good accounts of themselves when appearing this season.

The way that Liverpool have coped with these injuries and still have managed to be top of the league is impressive, and a big part of that comes down to the winning mentality that Jurgen Klopp has instilled over recent years. The experience this group has gained from winning a Champions League and Premier League should not be overlooked and I think they are more professional in comparison to City who have had several off-field issues over the Christmas season.

The front-three of Mohamed Salah, Sadio Mane and Roberto Firmino looks to be as good as ever with Salah leading the way in the top-goalscorer charts with 13 to his name so far. Liverpool have amassed an expected goals (xG) figure of 33.6 this season which is higher than any other club. This shows that the Reds should have scored the most goals this term, based on the frequency and difficulty of their chances this season. Dropped points in recent weeks against Fulham and Newcastle and West Brom does give some cause of concern, but this team’s mentality should not be underestimated and I’d be happy to have them onside for the title. 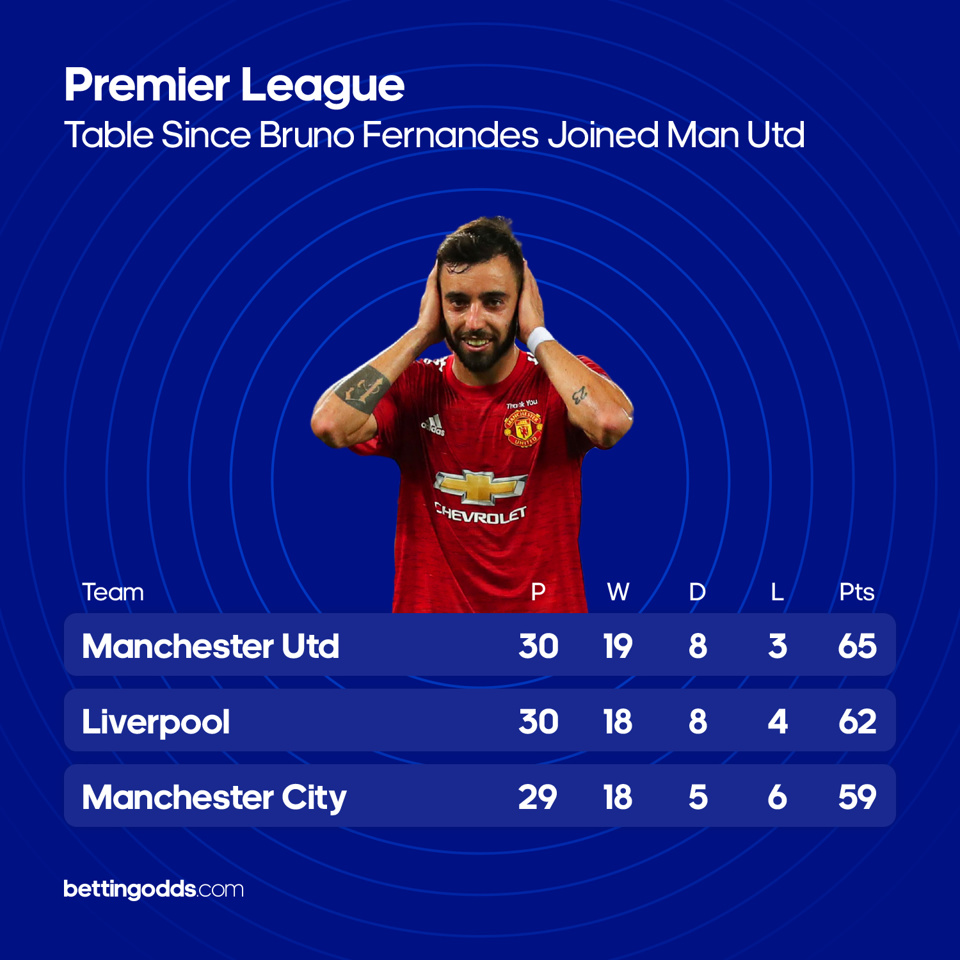 Manchester United 7/1 - A big improvement, but not this year for Solskjaer

After failing to win any of their first four home games, Manchester United were 40/1 to win the Premier League, though since then, Ole Gunnar Solskjaer’s side have put together a run of 10 games unbeaten with eight of those being victories. The Reds are now priced at 7/1 for their first title since Sir Alex Ferguson departed in 2013 with a third the odds (⅓) available on two places each-way with most bookmakers.

Shades of Fergurson sides of old have been seen this season with United winning from losing positions in six of their seven away matches. It’s on the road where Solskjaer’s side have excelled this term, which gives the clash with Liverpool at Anfield on January 17th an added bit of spice.

One player who has been instrumental for United since arriving last January is Bruno Fernandes. The Portuguese midfielder has scored eleven goals and contributed seven assists so far this season and if we look at the league table since he arrived, Manchester United would be top with 65 points from 30 games played, ahead of Liverpool on 63 points.

There’s no doubting the improvement in this side and when you look at their position in the Premier League table on January 1st 2020 compared to January 1st 2021, there are stark differences. In 2020 Manchester United were fifth with 31 points from 21 games, whereas in 2021 they are second with 33 points from 16 games. That’s two points more with five games fewer played!

With plenty of teams still in contention as we approach the halfway stage, I sincerely hope we are treated to an enthralling title-race which we all deserve in these dark times. Manchester United are much improved but I see them falling short in the final quarter. Manchester City have looked much better of late and their solidity at the back should give them more structure in the second half of the season. With the experience of last season’s title win and the best front-three in the league, it’s Liverpool who I think will be top come the end of the season. Klopp’s side haven’t lost at home in the league since April 2017 and they have the ability and experience to come out on top again. The players have shown a desire to win trophies and one should not underestimate their mentality and hunger for further success.