We’re now just under a third of the way through the Premier League campaign, and things are really starting to take shape in England’s top division.

Chelsea lead the way after 12 games, sitting pretty on 29 points after the first 12 games, while Manchester City follow just three points behind in second place and Liverpool reside in third on 25 points.

Mohamed Salah leads the way at the top of the scorers chart having netted 11 goals in his 12 league outings, with Liverpool teammate Sadio Mane in joint-second alongside Leicester’s Jamie Vardy - both of whom have found the net seven times at the time of writing.

With so much focus on the winner and top-scorer betting markets, it’s easy to forget the betting opportunities offered up by certain bookies that often go under the radar. Today, BettingOdds.com looks at the ‘top assists’ market to see which players could offer the best value come the end of the campaign.

All prices referenced are with Unibet, who are the only firm offering this market at present.

6/4 favourite at the top of the betting is Liverpool’s flying wing-back Trent Alexander-Arnold. The England international has provided six assists so far and currently finds himself in dazzling form.

His pinpoint crossing and capabilities from dead ball situations makes him such a valuable asset to the Reds, and with three of the world’s most talented forward players all ready and waiting to finish the opportunities provided by the 23-year-old - including the league’s ruthless leading goalscorer Mo Salah - he should rack up plenty more assists from now until the end of the season. 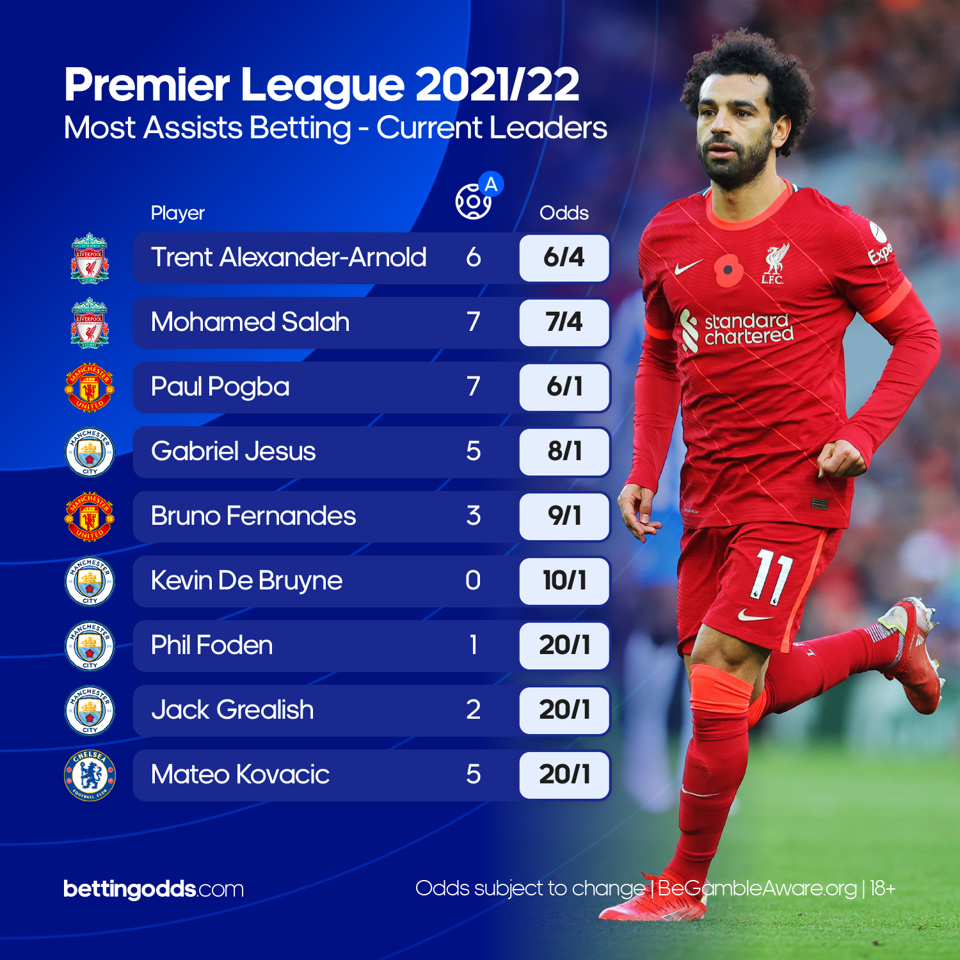 Salah himself is also in the frame. The Egyptian has the joint-most assists in the league so far with seven, alongside a hugely impressive 11-goal haul. The 29-year-old’s understanding with Diogo Jota, Roberto Firmino and Sadio Mane especially makes him an interesting prospect in this market; there isn’t another forward line in world football - let alone the Premier League - that are as in-sync as Liverpool’s and it is abundantly clear whenever they are in action.

Salah also tops the list for xA (expected assists) in the top-flight with a rating of 5.0 and is surely set to provide more important layoffs for his teammates, as the focal point in such an attack-minded Liverpool side gunning for the league title. Interestingly, the Reds forward was as big as 20/1 in the market pre-season, with the bookies clearly just focusing on his goalscoring prowess and perhaps underestimating his creative talent in the final third.

Manchester United midfielder Paul Pogba also has seven assists to his name in the Premier League but hasn’t registered one since September 9th and is currently ruled out with a long-term injury, so it looks unlikely that he’ll be a worthwhile bet. For anyone who disagrees - odds of 6/1 are on offer.

Manchester City’s Gabriel Jesus is fourth-favourite in the market at 8/1 and currently has five assists to his name, despite ranking all the way down in 14th for xA with a measly rating of 2.1. With the amount of squad rotation at City and a lack of guarantee over the Brazilian’s game-time considered, I would be reluctant to get behind the 24-year-old or his teammate Kevin De Bruyne, who is a shade longer at 10/1 but is yet to register a PL assist in 2021-22. 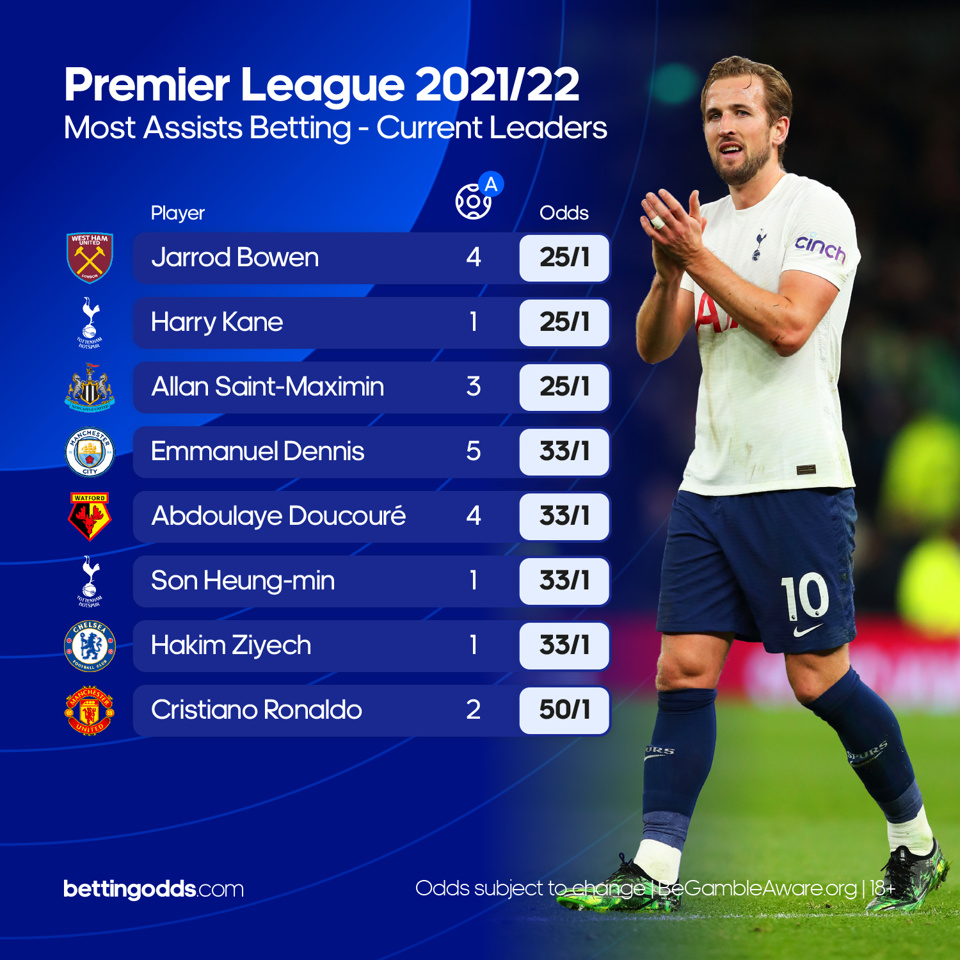 One player that catches the eye at a bigger price is Watford’s Emmanuel Dennis (33/1). The Hornets forward has chipped in with five assists in his 11 league outings, including two in the Hertfordshire club’s 4-1 demolition job on Manchester United on Saturday, where he also found the net for the fourth time this season. Dennis is playing with so much confidence at the moment and is undoubtedly Watford’s biggest creative threat, supplying the likes of Ismaila Sarr and Josh King in front of goal so could potentially be worth a small stakes play.

It’s almost impossible to look past the two market-leaders at this point in time, though; Liverpool duo Alexander-Arnold and Salah. At a touch bigger, it’s the latter who offers the best value considering he currently has a one-assist lead on his colleague, although a one-month break for the African Cup of Nations at the start of 2022 will undoubtedly hinder his progress a little.

Still, this isn’t just any old player we are discussing. Salah is a force like none other this season and will be as determined as ever to make up for lost time when he is integrated back into the Liverpool fold in February, ready to build on the foundations built before his upcoming - and severely ill-timed - hiatus in January.