Boro were favourites on the day, but nobody expected a scoreline of that magnitude.
By Callum Pragnell
12:16 Friday 8th May 2020 - 2 minute read

It’s been 12 years since Middlesbrough thumped Manchester City 8-1 on the final day of the 2007-08 season.

Of course, a lot has changed for the victims of that heavy defeat during the last decade; City quickly went from a mid-table team in the top-flight to one of the most feared in the world. They have since won four Premier League titles, two FA Cups and five League Cups thanks to a huge amount of middle-eastern investment.

The story was different in 2008, though, however difficult it is to imagine now. A side containing the likes of Michael Ball, Richard Dunne and Darius Vassell were completely taken apart by Boro, with Alfonso Alves stealing the headlines by netting a hat-trick.

Stewart Downing was also instrumental in the resounding win, scoring twice, while a stunning free-kick from Fabio Rochemback heaped more misery on the travelling City fans. Jeremie Aliadiere and Adam Johnson also found the net during the demolition job. Elano did manage to etch his name onto the scoresheet for the visitors, though by that point it was very much a case of damaged limitations.

Boro were the favourites heading into the clash on home soil, with bookmakers giving them a 45% chance of winning the contest at odds of 6/5. However, nobody would have expected them to win by such a margin. City, on the other hand, were handed a 28% of winning, priced up at 5/2 in the betting odds.

In contrast, when the pair last met in the league - a 2-2 draw back in April 2017 - Boro’s odds to win were as high as 12/1, with bookies giving the north east outfit just a 7.7% chance of beating Pep Guardiola’s eventual Premier League winners.

City were priced up as short as 1/4 three years ago, with bookmakers giving them an 80% chance of victory - showing just how far they have come since that pre-takeover 8-1 mauling in 2008.

Aside from that heavy loss 12 years ago, City actually endured a fairly promising campaign in the Premier League, finishing 9th under Sven-Göran Eriksson in what would prove to be the Swede’s one and only campaign in charge of the Sky Blues.

Just down the road, neighbours and fierce rivals Manchester United clinched the title with a 2-0 victory over Wigan Athletic - beating Chelsea to first-place after the Blues were held to a 1-1 draw at home to Bolton. Must have hurt. 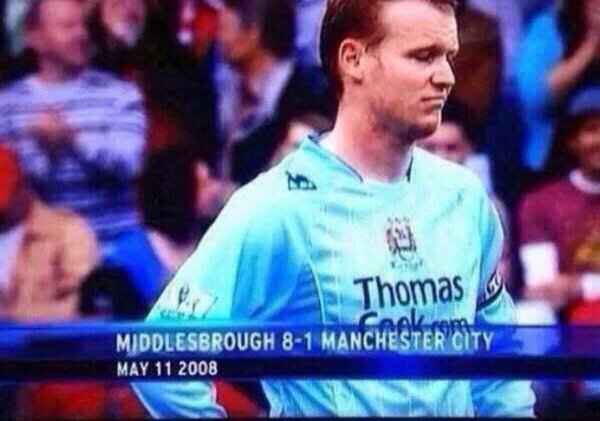 📅 💰 #OnThisDay in 2008, Middlesbrough thrashed Man City 8-1 at the Riverside on the last day of the season