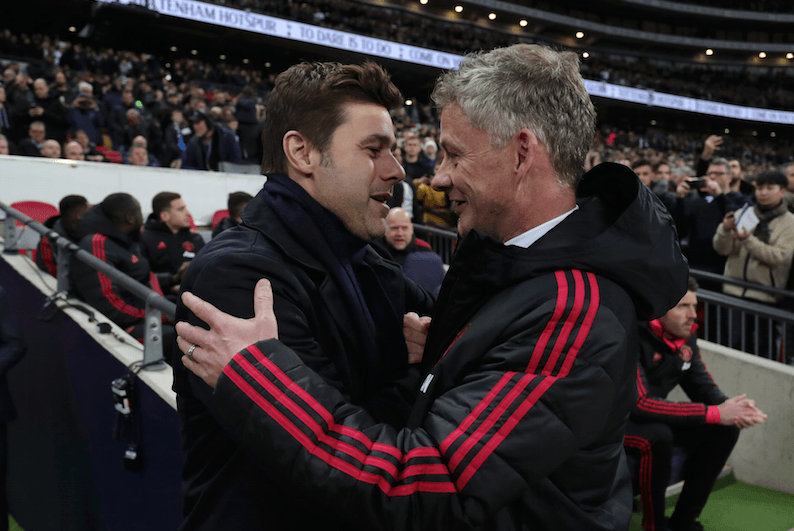 Mauricio Pochettino is now the firm favourite to become the next Man Utd manager.

The PSG boss, a 20/1 shot for the job on Sunday, has seen his odds shrink in the betting over the course of the last 24 hours.

Pochettino, 49, now leads the way at the top of the market (10/11 Paddy Power) ahead of Brendan Rodgers, Michael Carrick, Erik ten Hag, and Steve Bruce whose odds have been slashed from 80/1 to 12/1 following the publication of an article in The Athletic which reports that the former Red Devils defender is keen on the interim job.

This has, obviously, caused quite a stir on social media although it's important to note that it's Bruce that's interested in the vacancy - why wouldn't he be - not the club that has come out and said they are keen to hire the former Newcastle manager who was sacked last month after a winless start to the campaign.

BBC Sport and Sky Sports both report that Pochettino - contracted to PSG to 2023 - is open to a return to the Premier League with Man Utd, and could even be prized away now, as opposed to the summer.

In a statement on Sunday, Man Utd said: “Michael Carrick will now take charge of the team for forthcoming games, while the club looks to appoint an interim manager to the end of the season.”

However, should the option to appoint Pochettino be possible right now, then surely that’s the route they will take. His fast-paced, high-press, entertaining philosophy is the style of football that United fans crave at Old Trafford.

"I think Mauricio Pochettino - although he'd never say it - would leave to come to Man Utd on a five-year deal tomorrow," Gary Neville told Sky Sports.

"He'd look at that group of players, he'd look at the club and he'd realise he'd probably be able to achieve more than he wants at Manchester United in terms of a project.

"At PSG you are on a season by season, 'you've got to win the Champions League or you're out', type of model. I don't think that suits Pochettino. I think he would absolutely come to Manchester United on a five-year deal, with backing behind him."

After leaving Tottenham two years ago Pochettino spent just over a year out of management before returning to the dugout in January 2020 with PSG, where he replaced Thomas Tuchel.

Within a week he’d lifted the first trophy of his managerial career - Trophée des Champions - however, he would miss out on the Ligue 1 title, and despite beating Barcelona and Bayern Munich he was then unable to get the better of Pep in the Champions League semi-finals. Pochettino did, however, add another trophy to the cabinet after PSG beat Monaco in the Coupe de France Final.

This term, PSG failed to retain the Trophée des Champions, but are already 11 points clear at the summit of Ligue 1 with 12 wins from 14 games.

Coincidently, Pochettino just so happens to be in Manchester this week for PSG’s crunch Champions League clash away to Pep Guardiola’s Man City, whom the Parisians beat 2-0 earlier this season. They are currently second behind City in their group although a win at the Etihad will send them through to the next round.

Results-wise it’s been a decent start to the season for Pochettino and his galaxy of stars, but while he’s not believed to be totally happy in his post, he has an excellent chance to challenge for all honours this season, both in France and in Europe. With this in mind perhaps a summer move is more likely.