Man Utd are on the hunt for a new manager following the departure of club legend Ole Gunnar Solskjaer.

Below we assess their options, of which there are plentiful.

We look at a shortlist of potential interim candidates through to the summer, then onto the long-term contenders; including out-of-work and under contract managers.

Why? The fact that the Watford result forced the hierarchy into action means there's not yet a stand-out candidate so Michael Carrick is at the helm as caretaker for the here-and-now, as confirmed in the official statement. We’re talking Villarreal this week, Chelsea next weekend, and perhaps beyond that. Familiarity of the squad and a favourable festive fixture list could play into his hands if United twiddle their thumbs.

Why not? Man Utd need a fresh start. Carrick potentially has a bright future ahead of him as a coach or manager, however this isn’t the time for blind faith. He is not the long-term solution for the Red Devils. At best he’s a very short-term option but it would be a real surprise if United go down a similar route again and make Carrick manager, even until the summer. Familiar with the players but does he have their backing? Unlikely to see an upturn in performances unless he has been hiding some tactical masterclass.

Why? An option that could gain ground if the main contenders refuse the job until the summer. Knows the club, probably won’t take much to lure him over from Qatar, and perhaps surprisingly to some he’s actually had a very decent managerial career, albeit just in France: Won Bordeaux the league and cup double, then 11 trophies in three seasons at PSG.

Why not? Not really pushed on since leaving PSG five years ago.

Why? Forever linked with a move to the Premier League. Could the timing now be right for the German icon? He’s influenced the careers of multiple managers eg. Jurgen Klopp, Thomas Tuchel, and Julian Nagelsmann. Would be fascinating to see this one in action.

Why not? Similarly to Marcelo Bielsa, while he’s influenced so many managers his CV lacks major silverware and jobs at the very top. He’s also employed at Lokomotiv Moscow as Head of Sports and Development.

Why? Buckets of experience and expertise. A World Cup winner who made Germany great again. Would surely jump at the chance to manage United, even if it’s just for 6 months.

Why not? Not been linked with an elite club since his Germany tenure ended in the summer. It didn’t end on a high either. Hasn’t managed a club side since 2004 and that was Austria Vienna.

Next Man Utd Manager Odds: Top 5 candidates according to the betting

It's finally happened, after what feels like years, Ole Gunnar Solskjaer's luck finally ran out on Saturday as Manchester United slumped to a 4-1 defeat at the hands of Watford and on Sunday the club made it official, Ole…

Why? Arguably the most high-profile option who is out-of-work. Experienced immense success at Real Madrid with Cristiano Ronaldo and Raphaël Varane in his star-studded side. No manager in history has won more than his hat-trick of Champions League trophies. Could handle the egos and command respect. The league is gone but could whip the club into shape in Europe.

Why not? Untested elsewhere. No doubt he did a superb job at Real Madrid but he did have a host of world class stars in his squad. That, however, doesn’t automatically equal success, which he achieved in abundance. Doesn’t appear to be in a rush to return to management and may be waiting on the France job.

Why? Successful pretty much everywhere he’s been. Last Barcelona boss to win the title, which he did back-to-back and then led the table halfway through his third season before he was sacked. Other achievements include three titles and two cups at Olympiakos, Athletic Bilbao's first trophy in 30 years, and a run to the Europa League final with Espanyol.

Why not? Been out of work since leaving Barcelona nearly two years ago. Was sacked by the club due to concerns over his style, which was on the more pragmatic side. There are arguably better suited options. A punt at 100/1. An intriguing one, mind.

With pressure building on Ole Gunnar Solskjaer following Manchester United’s disasterclass against Liverpool on Sunday, speculation surrounding the Norwegian and his future at Old Trafford has been rife in the media.  While…

Why? Pushed Man City all the way in a runners-up finish at Liverpool. Absolute dominance at Celtic. Two top-5 finishes with Leicester - which could both have been Champions League spots - and masterminded the club's first ever FA Cup triumph. Has the brand of football, talks the talk, but can he walk the walk?

Why not? Former Liverpool manager may put some fans off. Does that matter? Possibly. Matt Busby played for Liverpool and Man City, and he did alright at Man Utd! As excellent as Leicester have been since Rodgers' appointment, they've gone off the boil this season, injuries haven’t helped. Doubts about his record in Europe, which is pretty poor. Has also frequently said he’s invested in the Foxes project and won’t leave - recently snapped at a reporter who asked about Man Utd.

Why? Long term link, Fergie a fan, has the high-energy style of play that United fans have been craving. Obviously knows the league well too. Transformed Spurs into title challengers and took them to the brink of Champions League glory. The Times reports that he's keen, at the end of the season.

Why not? Not - yet - won much in terms of silverware. For some reason he doesn’t seem to have an overriding amount of support from many Man Utd fans at this moment in time. Unfinished business in Paris and has a great opportunity to win trophies domestically and in Europe. Heart may be set on a future return to Spurs, although Conte could be there for a while.

Why? Scintillating style of play, excellent record at developing players, and would be a popular appointment with many fans. Previously took Ajax's youngsters to the Champions League final - since lost many of the stars - but has re-built and is enjoying a superb season.

Why not? Could be difficult to lure over until the summer. Despite his immense talent and success at Ajax, he's not yet viewed as an elite manager. That shouldn't really matter though. May take time to stamp identity.

Why? Doing a cracking job at Sevilla who he led to Europa League glory and has them in a title race at the early stages of the current campaign. Went unbeaten with Spanish national team before Real Madrid came knocking.

Why not? Real Madrid tenure didn’t go to plan - just 14 games - although he’d argue he deserved more time. Failed in the big games at Porto and left trophyless. Meanwhile, he's settled at Sevilla who are just two points off top spot in La Liga. Seems a bit harsh to say but could be considered a slightly underwhelming option compared to other candidates. 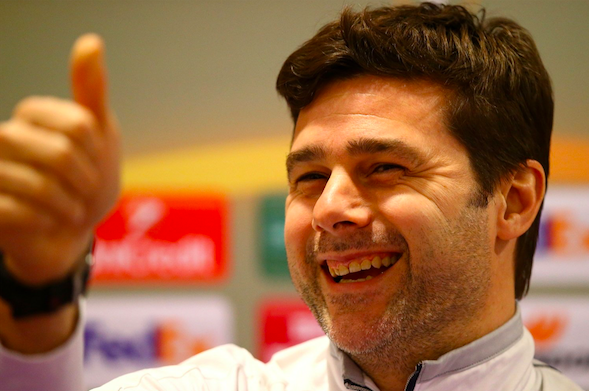 Could Poch soon return to the Premier League?

Why? An exciting British talent who is on an upwards trajectory and ticks a lot of boxes: tactically versatile, progressive, will have a concrete plan. From a neutral perspective it would be very intriguing to see him work his methods at a top club, and great for a homegrown manager to be elevated into such a big job.

Why not? Simplistic to say but Brighton-to-Man Utd is a huge step up in terms of quality, pressure and expectation. A slow start could leave him under pressure.

Why? Won the treble at Barcelona. Led Spain to Euro 2020 semi-finals. Apparently Cristiano Ronaldo’s first choice. With international games sparse he could potentially be viewed as an interim option until the summer, then see where both parties are at.

Why not? Would he leave now or even in the summer? Spearheading a new era with Spain, qualified for World Cup and has potential to achieve something special in Qatar.

Marcelo Gallardo has long been linked with a move to Europe. He's done a simply incredible job at River Plate.

Ronald Koeman is free, but difficult to see this one happening. Diego Simeone could potentially have his head turned next summer.

Arsene Wenger until the end of the season? Then there's Roy Keane, that we would love to see.

Scroll down for a full list of contenders in the betting...