Premier League Odds: Back Ancelotti's Everton for a top-six finish

Read why we think Carlo Ancelotti can guide Everton to a top-six finish this season
By Anthony Eadson
14:24 Monday 1st March 2021 - 5 minute read

There’s just 13 points separating Arsenal in tenth and Manchester United in second place in the Premier League table with a third of the campaign remaining. It’s pretty tight in there and with more fixtures coming thick and fast this week @AnthonyEadson has taken a look at the Top-Six finish market with a lean towards a certain north-west club.

I lost count how many times I heard commentators and pundits mention the ‘business end of the season’ when watching football this weekend and with that in mind I’ve taken a dive into the top-six finish market. Everton are the team that catch my eye here at the price of the 3/1 with BetVictor, which when considering the reasons below looks an attractive prospect.

Carlo Ancelotti’s Everton currently sit 7th in the Premier League table, however it’s worth noting that they currently have two games in hand on all the sides above them. The Toffees take on Southampton at Goodison Park on Monday evening with the visitors not having collected three points in their last eight league outings.

Following the game with Saints is a trip to West Brom on Thursday, a team which they scored five goals against in a win earlier in the season. Wins in both these fixtures could see Everton go into the weekend in as high as fourth place going into the weekend should results go their way. 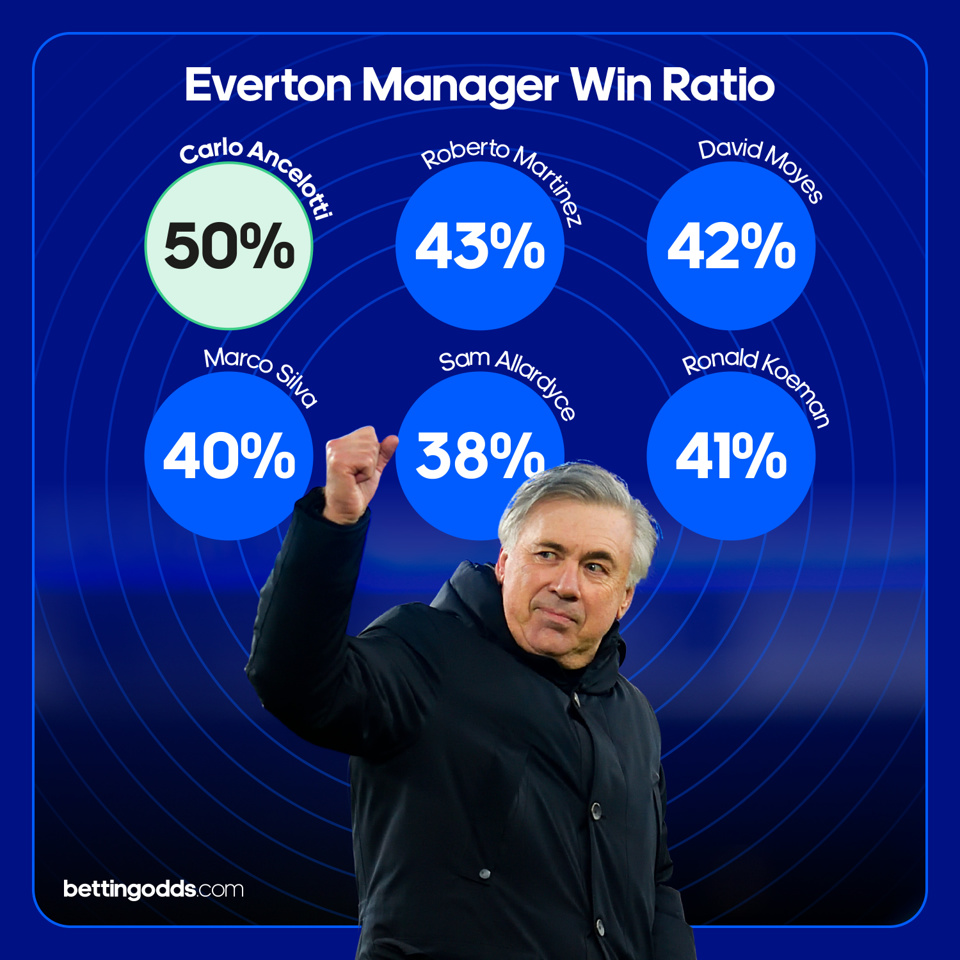 Focus on the Premier League

Unlike some of the other sides in contention to finish inside the top-six places this season Everton do not have to worry about any midweek trips to the continent to play in either the Champions League or Europa League.

After Leicester’s exit last Thursday, Arsenal, Liverpool, Manchester United, Chelsea and Tottenham all remain in European competitions, which certainly complicates their already heavily congested league fixture schedule. Fatigue is another potential factor that could come into play for some of the so-called ‘big six’ in the remainder of the campaign in this most unprecedented of seasons.

The only other competition that Everton remain in is the FA Cup. Their quarter-final with Manchester City takes place on Merseyside in just under three weeks time, although It’s hard to see Everton progressing to the semi-finals based on current form, which would then leave them fully focused on the Premier League.

Dominic Calvert-Lewin and Allan were both influential in Everton’s impressive run at the start of the season and both should return to the starting line-up against Southampton on Monday. Unlike some of the other sides around them in the table, Everton’s treatment room is a fairly quiet place at the moment with Yerry Mina being their only notable absentee; the Colombian is due back in the next two weeks.

Several other teams, such as Leicester and Liverpool, both have on-going injury issues, with Harvey Barnes being the latest casualty for the Foxes. Barnes was just hitting form at the right time and with talk of him going to the Euros it’s a shame to see him pick up this knock which could keep him out for around six weeks. In total Leicester currently have nine injuries with James Maddsion and James Justin being two of the biggest names on the list.

Liverpool’s injury ‘crisis’ has been well documented this campaign and with seven patients still in their waiting room, it’s far from a first choice XI for Jurgen Klopp. Other rivals around the Toffees in the table, such as Aston Villa, have been struggling to pick up points without Jack Grealish and with James Rodriguez, Dominic Calvert-Lewin and Allan all returning from recent spells out, I’m backing Everton to hit form at the right time.

When it comes to managerial experience there are not many better in the history of the game than Carlo Ancelotti. With domestic titles in England, Italy, Germany, Spain and France, Don Carlo is only one of three managers to have won the Champions League three times, alongside Zinedine Zidane and Bob Paisley.

Ancelotti’s wealth of experience could well be crucial in this final third of the season and when we look at the win ratio of recent managers, the Italian tops the charts.

The last time that Everton finished inside the top-six places was back in 2013/2014 when they finished 5th under Marco Silva with Romelu Lukaku firing in the goals. After a 12th place finish last season there’s no denying that clear improvements have been under Ancelotti and after their recent win in the Merseyside derby, I’m confident that they will finish the remainder of the campaign strongly.

With two very winnable fixtures this week I can see the Toffees being much shorter than the 3/1 currently available for a top-six finish come the weekend. I think Leicester’s recent injuries will be a massive blow for them and that West Ham will struggle to maintain the consistency that has seen them climb to fourth in the table. Arsenal and Tottenham may have left themselves too much to do in order to make up ground after poor spells in recent months, which all paves the way for Everton to steam into the top-six at 3/1 with BetVictor.