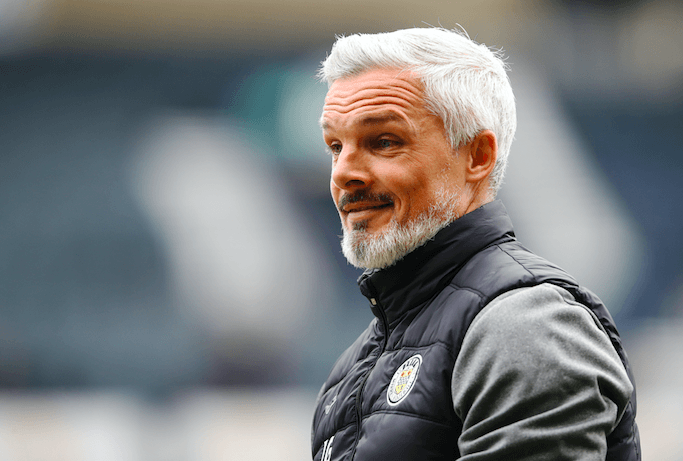 Jim Goodwin is now the odds-on favourite to become the next manager of Aberdeen.

The St Mirren manager has seen his odds cut from 2/1 to 1/2 (Bet Victor) in the betting market, pulling clear of the likes of ex-Hibs boss Jack Ross, and former Dons players Paul Hartley (Cove Rangers manager) and Derek Adams, who parted ways with Bradford on Tuesday.

Aberdeen sacked Stephen Glass on Sunday, then swiftly named an interim coaching team led by U18’s boss Barry Robson, who halted the club’s three game losing streak on Tuesday after he oversaw a 1-1 draw at home to St Johnstone.

Robson, 10/1 for the full-time job, is expected to remain at the helm for Saturday’s trip to Motherwell as the Dons seek their first win of 2022.

Goodwin has enjoyed a very bright start to life in management since stepping into the dugout in 2016.

The Irish manager led first club Alloa Athletic to promotion from League One to the Championship via the play-offs, then preserved the club’s second-tier safety.

His accomplishments caught the eye of Premiership club St Mirren who in the summer of 2019 appointed their former player as manager on a three-year contract.

St Mirren finished 9th in his COVID hit first season in charge, which was followed by 7th spot last term - the club’s highest finish since 1989 - while they reached the semi-finals of both the FA Cup and League Cup.

The Buddies have continued on their upwards trajectory under Goodwin this season, with the club 6th in the table after an unbeaten start to 2022 during which they’ve accumulated 13 points from their last five matches; their superb form puts them two points ahead of 8th-placed Aberdeen with a game in hand.

Goodwin has won praise for how difficult to beat his side have become of late - only Celtic and Rangers have lost fewer league games so far this season - while his recruitment and development of younger players have also caught the eye.

The 40-year-old now appears to have a huge decision to make when it comes to his future at St Mirren.

Aberdeen have reportedly made an approach for Goodwin’s services - which was rejected - and could trigger his £250,000 release clause, according to The Daily Record.

I really don't want Jim Goodwin to go. But I can understand if he did choose to go. Aberdeen are a bigger club than us and have good financial backing, never mind the fact he would potentially double his wage. I'd still be absolutely gutted though 😢 I love the man

Elsewhere, Bodo Glimt manager Kjetil Knutsen - who today (Thursday) faces Celtic in the Europa Conference League - represented an intriguing option given his attractive style of play and stunning success at the Norwegian champions, however he’s committed to his current club and has now drifted out to 33/1.

Jack Ross is available after leaving Hibernian in December, with the former Sunderland boss the second favourite at 11/2.

Paul Hartley (6/1), who ended his playing career at Aberdeen, led Cove Rangers to the League Two title in 2020 and now has his side top of League One, while he previously won the Championship with Dundee.

Derek Adams rocketed into the betting market after he was axed by Bradford on Tuesday, although his odds have since lengthened from 2/1 out to 7/1.

Furtherafield you can find Neil Lennon at 16/1, David Martindale (Livingston) and Dick Campbell (Arbroath) out at 20/1, alongside Ole Gunnar Solskjaer.